RANGER AGAINST WAR: What If? < 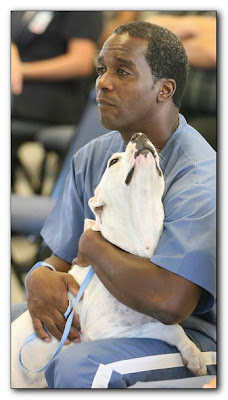 Here's a wonderful antidote to the Michael Vick's dog abuse story ("Dog's Learn Obedience From Inmates.") From the county due east of us, it is ostensibly a story about a dog obedience training program carried out by inmates at the Taylor County Correctional Institution, which has as its goal the upping of adoptions at the local animal shelter.

But the program accomplishes so much more. Like similar programs aimed at inner city youth, this imparts a sense of pride in the trainer, and care and compassion are benefits which accrue to both sides of the equation. Evident in the photo above, Edwards said of his dog, "I've grown attached to her."

Warden Duffie Harrison said, “We are not going to cure all the evils of the world, but I know when you are around something kind and good, it makes you a better person.”

What might have been Vick's relationship with dogs had he matriculated in such a program?

If convicted (Spartacus for Puppies), participation in such a program would seem a fitting sentence.