RANGER AGAINST WAR: The Shape of Things to Come <

The Shape of Things to Come 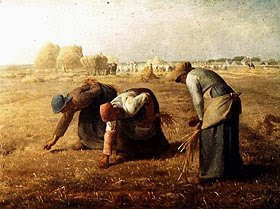 With "grim" economic news from a Labor Department report showing consumer inflation is up 5% over the last 12 months, and a Dow dip of 92 points yesterday, we'll revisit last Wednesday's post, Profligacy.

With consumer prices that have "shot up in June at the second fastest pace in 26 years with two-thirds of the surge blamed on soaring energy prices (Consumer Prices Jump 1.1% in June)," what might life in a turned-down 21st century look like for many residents?

Though the economy is taking a nosedive accompanied by spiraling commodity prices, the media assures us this is not linked to the hemorrhaging of government assets at war. We are nothing if not pragmatic at Ranger. If you are hitting the links later, the following ideas may be removed from your experience. Still, take a spin through and see what you can add.

Last Thursday's Achenblog (Will Turn Phrase for Food) considered the quid pro quo transactions which have disappeared from our daily lives, and waxes nostalgic over days past when stores actually competed for your business.

Agent 99 remembers using BP glasses with yellow-and-green happy faces, a free 6 oz. bottle of Coke with a fill up, and every fill up came with an under-the-hood check and windshield wash and tire pressure check. Today one is lucky to find a filled reservoir with the squeegee at the pump. If you can find air for your tires, you'll pay for it, and bring your own gauge.

Mom saved S and H green stamps in books which you could redeem for useful household items. Dad's hobby was upholstery, and he was very pleased to restore to fitness items destined for the trash heap. These he would sometimes give to someone who needed them. Mom kept a small garden, and others in the neighborhood would share their particular bounty at harvest time.

In they have Sperrmüll days, when people set their unwanted items out on the street to be salvaged before they are taken to the landfill. Why don't we have Sperrmüll in every city in the ? A few have started the initiative, but not many.

In our college town, the ritual for poor students and city residents is "dumpster diving" following each semester. Families turn out for this ritual, and having partaken once, I can testify that it was a civil affair. Since one can only canvass so much, people declare what they are looking for and ask the same of you. We found money, new clothes and appliances in the dumpsters. Why weren't these items made available in a less prohibitive way?

In our Publix markets each night an obscenity occurs: shopping carts full of refrigerated food are removed from the shelves as their freshness date is soon up, and they are thrown away. Why are these foods which were for sale only minutes before not given to needy people? Management says it is due to liability issues. Couldn't needy people sign waivers of release before taking possession of the items?

Les Glaneurs (2000), a film by Agnes Varda (distributed by Zeitgeist Films, a rather prophetic name), explores the French subculture which lives by salvaging still edible food from market stalls and harvested fields. These foods may be undersized or blemished, but otherwise edible. Varda reads from a French codicil still in effect from the 16th century specifying that citizens have the right to scavenge in fields behind the first harvest.

Living in agricultural area, we can testify to the tremendous waste of agricultural foodstuffs. Massive amounts of tomatoes go unharvested or are dumped off of trucks because they are too ripe, and will not survive transport.

Perhaps bartering will once again become a respected mode of transaction. Landfills are environmental blights, yet our highly litigious society prohibits salvage. I am told our landfill keeps paint in a separate room, and those in the know are allowed two buckets per week. At least that is something recycled.

Perhaps my real motivation was a recent article, Baby Boomers Got the Blues. For these "curmudgeons," everything is Farshtunken. "Boomers have never been happy."

"A whole lifetime of whining" due to a sense of entitlement and revolutionariness which hasn't quite born itself out. Anti-depressant manufacturers grow fat over their overblown expectations of transcendence . "It's all part of the frantic tap dance of figuring out how to raise boomers' tender and flagging happiness . . ."

If you are dismal now, these times give little reason for renewed optimism. Your thoughts on 21st century survival are welcome.

I'm a boomer and I'm happy. I live as close to the ground as I can. No payments other then rent and everything that goes with it. Small garden, travel very little and this was before fuel went $$$$ but I'll find out next month if I kept a high paying blue collar job (I think I'm gone)but have some saving and in Northern Central Valley of Calif. there are a few jobs and I'm close to 60 so I don't care what it is. I saw the money thing for the US and my future a few years ago so have been getting ready ever since.
jo6pac
Everything is on schedule, please move along.

We could learn from the old folks. As I remember back in the good old days, Grandma always had a kitchen garden. Even in the winter with snow on the ground she grew green leafy stuff, Swiss Chard I think it was. She had to use straw and the beds were always on the south side of the house, covered with old doors during a snowstorm. She always put up tomatoes, pickles, peppers, and corn relish in mason jars for the winter table. She raised her own chickens and wasn't too squeamish to butcher the non-egg-layers.

As a young boy in the 1950s, I detested harvest time. Grubbing around in the dirt for potatoes and turnips and then lugging them down to the cellar in burlap sacks to put in her root bin was not my favorite activity when the world series was on the radio or when the rest of the kids were out fishing. But I did love to help her with the blackberry jam and jelly, including picking, boiling, straining through cheesecloth to separate the juice (for the jelly) from the seeds, skin and any other remaining solids (for the jam). For I knew that my sweet tooth would be later rewarded.

I am now trying to follow her lead (except for the canning). But am not doing a very good job of it. The old folks knew when, where and how to plant. They knew how to eat well year round with just a minimal cash outlay for staples such as flour, salt, sugar, bacon, an occasional ham or corned or salted beef. They knew how to prune fruit trees to maximize yield. And unlike me they did not need TV garden gurus or gardening encyclopedias and fifty pound bags of super-fertilizer.

Her brother, my great uncle Clarence, used to make a mean hard cider from whatever apples she did not use for pies. He had kegs of it - some no stronger than beer or wine and some which was an applejack brandy. Grandma gave him hell for it, but he would wink at me and claim that the doctor said he needed it for his throat ulcers from the mustard gas in the Great War. He also did some gleaning of clams and oysters right after the commercial shellfishermen went home for the night. But I think they would have called it poaching as they claimed to own the beds. And as I recall he always bagged some venison regardless of the season if a deer was tearing up Grandma's garden. Today, he would probably be jailed by the DF&W wardens or hounded by the PETA activists.

Fortunately (or not), I have been able to duplicate Uncle Clarence's talents - but with homemade cherry brandy instead of his applejack. Now I just need to learn Grandma Opal's talent for growing corn, squash, and beans.

Hey Mike, that brought back memories. Thanks. My grandparents on my mother's side lived on 2 acres and lived well. I loved going there for sunday dinners as grandma would butcher a chicken and we'd have chicken, mashed potatoes and white gravy and all kinds of fresh vegetables. and for desert there would be strawberries, rasberries, blueberries, blackberries or whatever was in season or canned.

I've gotten away from that lifestyle in the past few years but it looks like it might be time to get back too it It won't be much of an adjustment for me though. I too live pretty close to the ground.

It sounds like you're right on schedule--good for you, and good luck.

What great memories, Mike. You are doing Clarence proud by carrying on the tradition with your cherry brandy. The beans can't be much more difficult.

Here is a video on urban gardening by Fritz Haeg, his book is "Edible Estates; Attack of the front lawn."
http://www.dwell.com/daily/video/17171261.html

He may look a bit too precious in those red Frye boots, but his thinking is sound. Rather than cast wastelands of seeded, mown lawns that do nothing but consume water and harbor pests, use that space for something useful.

My mom's garden was in a very small plot 5 mins. outside of D.C. in not very arable, clayey soil at that.

Great memories, too. I am a sucker for wild berries.

This country has not addrseed the concerns of the blue collars such as yourself. Your comment slipped by me at first.

We as a society cannot discard the productive blue collar workers through outsourcing who actually made this country great. Just b/c you are approaching 60 does not mean that you are flotsam to be discarded.

There must be some realistic answer to people in situations such as you find yourself in. Both parties ignore this reality.

I just want you to know that I understand what you are trying to say.