RANGER AGAINST WAR: Inside the Box < 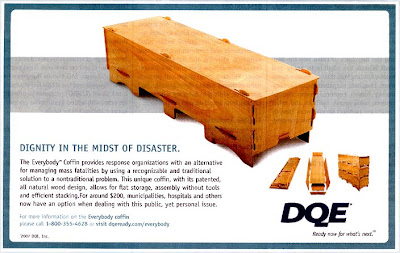 How transytory we be all daye.
This mater is wonders precyous;
But the entent of it is more gracyous
--Everyman (16th cen.)

Ranger stumbled upon this ad in the highly entertaining publication, "2009 Guide to Homeland Security Grants."

The "Everybody Coffin ™" is just what the doctor ordered. It'll lend you "dignity in the midst of disaster." The Everybody Coffin is a flat box, pop-up, stackable coffin, when you haven't the time for the very best. It has a certain cool Scandanavian-IKEA aesthetic.

Ranger wanted to share his curiosity with the Homeland Security Industry, which is taking the place of real industry here in the Homeland. Lisa shared recently that one very bored employee at the pre-screening area of the airport told her as she fingered the plastic baggies on the counter -- "Go ahead, take as many as you want. They're the good ones with the slider -- your tax dollars at work." That's a good chap who understands the circumference of his job.

If the ad goes viral, we'd like to nominate Toby Kieth as jingle writer. One can never err on the side of being too patriotic.

Witness the Everybody by DQE: "Ready now, for what's next," even when you're not.

Labels: dignity in the midst of disaster, Everybody coffin, homeland security coffin

posted by rangeragainstwar at 7:37 AM

there's a very telling passage in the anabasis where xenophon riffs on soldiers and digging.

you dig, you make your fortifications, then you fight, then you dig again, graves for the fallen.

just what we need more DHS concepts of "dignity."

buzzards gotta eat same as worms.which i remembered later was lifted from the outlaw, josey wales.

I think your sky burial is a very fine and dignified idea.

The opposite of life is not death. If it can be said to have an opposite, it would be birth. Life and death are a pas de deux. We die daily, but, we also can be said to resurrect daily.

Everyone's gotta eat -- our macrophages, the dust mites, the Ziploc baggie guy, etc. etc. We feed them all.

For the living dead is dead, the box is not for the dead's sense of propriety, but for the living sense of finality.
There is a reason we invest so much money, time, and emotional effort into the burial of a love one...we are making the emotional break with someone who was once alive, and now only exists in our memories.

However, I can say that there is still...something(???) of the dead that remains alive, which carries on, which still exists...it's just that the living, filled with the views of life cannot ever understand how that is possible...I know about this life after life, but understanding it? No, no I don't...not yet, but I do know.
So for the living dead is dead, but for the dead...they are still living, just not as the living understand it...I am making no sense...but this is something I know...I just don't understand it.../sigh...I'll stop.

I think a big part of this has to do with the fierce Xtian/Western division of "Life" and "Death". I'd go so far as to trace it back to the Egyptian obsession with death and afterlife, the obsession with the treatment of and preservation of the bodies of the dead, in some sort of attempt to prevent the cessation of life and to force death to serve the living.

In contrast to other societies - and MB's people being one - who seem to be more willing to humble "life" (and, by inference, themselves) and fit it into a larger wheel of existence, where I am a living man today and food for the scavengers tomorrow, who in turn cleanse the land for my children to thrive in and so on.

I can see a network of social patterns emerging from this, ranging from philosophy to science to warfare. When you see death as something that cuts off life and changes everything then you can and will live in different ways then if you see the human and the worm and the buzzard and the river, death and life, as a complex interlocking world that exist to serve each other.

You make a lot of sense. On the purest physical level, matter is neither created nor destroyed, so we could all say, like Jesus, that we were "before Abraham."

That is important to understand, that something persists. We wail and gnash our teeth at someone's passing for several reasons, none of them having to do with factual death of the departed.

You say, "There is a reason we invest so much money, time, and emotional effort into the burial of a love one...we are making the emotional break" -- that's part of it. Keening is ritual. But guilt is another part of it, and our personal feelings of loss. So that is all rather selfish.

If we believed the dogma, we'd be celebrating the departed's entrance into a better life. At heart, we're a bunch of fakirs.

Yes, death is a social construction, and rarely apprehended as the absolute correlative to life that it actually is.

sheerahkahn,
I offer you and the readers these words from Kahlil Gibran:
You would know the secret of death.
But how shall you find it unless you seek it in the heart of life?
The owl whose night-bound eyes are blind unto the day cannot unveil the mystery of light.
If you would indeed behold the spirit of death, open your heart wide unto the body of life.
For life and death are one, even as the river and the sea are one.


In the depth of your hopes and desires lies your silent knowledge of the beyond;
And like seeds dreaming beneath the snow your heart dreams of spring.
Trust the dreams, for in them is hidden the gate to eternity.
Your fear of death is but the trembling of the shepherd when he stands before the king whose hand is to be laid upon him in honour.
Is the shepherd not joyful beneath his trembling, that he shall wear the mark of the king?
Yet is he not more mindful of his trembling?


For what is it to die but to stand naked in the wind and to melt into the sun?
And what is it to cease breathing, but to free the breath from its restless tides, that it may rise and expand and seek God unencumbered?


Only when you drink from the river of silence shall you indeed sing.
And when you have reached the mountain top, then you shall begin to climb.
And when the earth shall claim your limbs, then shall you truly dance.

Lovely choice, POLT. Many thinkers have voiced the same thought over the milennia: Rumi, Krishnamurti, Tolstoy, Nietzsche... It has even been repackaged for the New Age set by the Eckhart Tolles, god love 'em.

But it's what any good biologist knows: death is here in the midst of life, an essential partner. It is not a separate phenomenon.

Hence what the thinkers mean when they say, "Die now (before your physical death)" meaning, embrace your totality. Then you are free.

Hence what the thinkers mean when they say, "Die now (before your physical death)" meaning, embrace your totality. Then you are free.

Yes, Lisa and thanks to every one who commented. It's always enlightening to come to this place cyber space.
jo6pac

my good friend and teacher, biiyii siziihi odih (soul flyer, or his white name, silas) told me before i left for vietnam,

you must learn your death song. sing it and go there to live.the idea of having a song prepared for the time of your death is something we hold very sacred.

it's not the "secret of life" because life doesn't keep secrets from us.

it don't ask trick questions neither.

It is one thing to stand on the precipice of the void, staring into it's stygian depths, its quite another to fall into it.

The struggle to remain alive, to breath one last breath is a battle of wills, but then, the battle ends, the monstrous strength that flooded your limbs to fight for that faint hint of air has now fled, and soon the darkness rolls in.
It's not painful, in fact it's not very terrifying, but you also see the void, the hole, the thing you know exists but have never seen it before. During the battle for air there is a struggle to stand on the precipice to hopefully step back from it's crumbling lip, but then comes the final moment when the strength is no longer in your arms. Your feet feel heavy, as does the weight of your body.
And then...the weight falls from you, and you feel light as a feather.
Falling, but not at a terrifying pace, rather like a gentle settling into a long sleep. The darkness rolls over your like a blanket.
No voices of long lost love ones calling you to distant shores of peace and happiness.
No wind filling the sails of your ship as you cross the river.
No...just the emptiness of nothingness that greets you like a mother for her child coming home from a long day. The darkness wraps around you, and you snuggle into it's embrace to settle in for a long stay in eternity.
And then there is nothing for you to remember because you are asleep.

and then you are awaken...strange to be awaken from such a slumber, for the sleeper, eternity has passed, but for the wailers only seven minutes.
But there is a lone voice screaming at the top of her lungs,
"Wait, he's alive! My G-d, he's alive!" that echoes through your mind as you think to your self, "why wouldn't I be alive?" because to you you are still who you are.
And soon the wailers scream even louder in joyous celebration, and one voice stands out that you recognize, dimly, but still enjoyable to hear once again welcoming you, the sleeper, back from the void.
A tearful mother welcoming her son back home from his long stay in eternity.
I know, I just don't understand it.

Wow. So you have been there. For those who have died (and returned), there is a certain peace that comes with knowing this other place. There are other places to be. Pettiness becomes unbearable to such a one.

This is why I admire military men who have seen battle. You face your own mortality, and as MB has explained, you own up up to all that you are (if one is honest). And it is alright.