RANGER AGAINST WAR: The Chino < 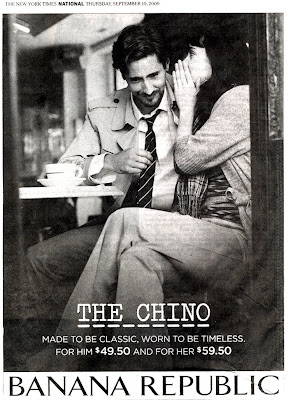 An imbalance between rich and poor is the
oldest and most fatal ailment of all republics
--Plutarch
__________________
Our friends at MilPub have been debating the state of the nation's economy over the past week, a discussion which brings us to, The Chino.

According to the National Committee on Pay Equity, as reported on the National Organization for Women's website, "For full-time, year-round workers, women are paid on average only 78 percent of what men are paid; for women of color, the gap is significantly wider. These wage gaps stubbornly remain despite the passage of the Equal Pay Act in 1963, and a variety of legislation prohibiting employment discrimination."

Banana Republic ran this 8" ad in yesterday's New York Times, selling this timeless classic for $49.50 for men, $59.50 for women. Now, considering women are generally smaller than men, their clothes generally not built as ruggedly and they are paid less, why would their version of the classic sell for 20% more than that of their brethren?

The ad implicates a society in which inequality is the norm, even in fashion matters.

Hi Lisa,
That's a curious quote from Greenspan. He was once one of Ayn Rand's inner circle.
I'm a union carpenter and we all get paid the same--women, minorities and good ole boys.

That is one of the good deeds of unions -- seeking equal treatment for equal performance.

Yes, Mr. Greenspan has had to renounce some of Ms. Rand's dogma.

I think this may be a lingering tribute to sexist tailoring of bygone days.

Women's clothing in the West has traditionally been more "complicated" than men's since us Y-chromosome types ceded the province of colorful, attractive clothing to you gals in the Victorian period and retreated into boring blacks and grays. So the notion that a woman's dress was more difficult to make and thus more expensive wasn't entirely silly.

Now that we tend to wear much the same types of clothing it IS silly that her pants should cost more than his. But if the rag trade - and the consumers - have been bent into thinking that hers SHOULD cost more than his I can see how this silly tradition continues. Understand it, that is, not accept or approve of it.

Does anyone know if Banana Republic is on that recent Dept. of Labor list of those using child and forced labor?

FDChief: Boring blacks and greys -- everything is unisex today, yes? So maybe the prices should reflect our Chairman Mao fashion ethos.

Lisa: It should, yes. But then the Banana Republic couldn't jack an extra ten-spot out of women's wallets. And who'd want to miss THAT opportunity?

gender and economics are two of my favorite topics Ranger :)

Right-o. As she's on her way to pay $60 for a mud pack at the Clarins counter which could be had for a fiver at Walgreens. . .