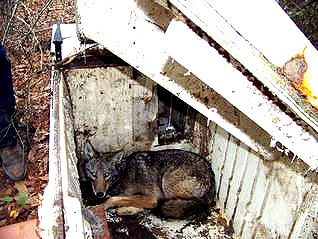 Coyotes are caught, caged and held before facing a cruel death.
By law, exits must be provided, but they are often blocked

Whenever the pressure of our complex city life
thins my blood and numbs my brain,
I seek relief in the trail;
and when I hear the coyote wailing to the yellow dawn,
my cares fall from me - I am happy
--Hamlin Garland
_________________
Where did the concept of "coyote ugly" arise? Coyotes are actually beautiful animals adapted by nature to fill an ecological niche. They exists because nature dictates they exist; their purpose is clear.

Yet in Florida there is a brutal practice of penning foxes and coyotes in enclosures from which they cannot escape, and then setting dogs upon them to maul and kill them in front of rapt spectators. The Florida Fish and Wildlife Conservation Commission decided last month to temporarily suspend the practice while they draft rules guiding the enclosures. Some who appeared at the meeting called these "hunts" a "way of life" and a "heritage", but it surely not the coyote's heritage.

From an editorial in the Tallahassee Democrat by the state director of the Humane Society of the United States:

"Florida residents continue to be shocked by the brutality of fox pens in their communities. Last year, neighbors to a pen witnessed dozens of coyotes crowded against a fence. The neighbors looked at the pen in confusion, until they saw dogs with numbers painted on their sides ripping into a cornered coyote. The neighbors spent the next year taking photographs of wounded coyotes and listening to animals dying inside the pen.

"As far back as 1990, a neighbor to one pen contacted The Humane Society of the United States and said, 'They turn the fox or coyote loose and then four of five dogs chase the animal until it drops from exhaustion … They either kill it or maim it up so bad it dies an agonizing death.' Another Florida resident wrote us stating that he was a hunter, and make no mistake, what went on next door to him in a 600-acre pen was a bloody spectacle as bad as any dogfight (Fox pens still spell animal cruelty that must end)."

The stocked and penned hunting and brutality of the kill is a part of the problem. Underlying this is is the mindset of many people Ranger knows who would kill a coyote or fox given the chance. The most common rejoinder given is, 'They're PREDATORS!" Well, we don't shoot attorneys, politicians or investment bankers, do we?

February 2010's Outdoor Life fronted it's cover with the ebullient, "Take 100 Coyotes This Season -- Calls, Stands, Tactics and Gear." They interview members of the "Century Club" who "routinely bag 100 coyotes a season," who recommend electronic callers and GPS systems, among other ploys, as "more people get interested in hunting coyotes, you have to get farther and father away ..." "Stay on stand" and "Find the water -- remote springs are killer spots." Reading about the scopes and weaponry and "pulverizing the target," and giant men decked out in full hunting regalia posed with these dead, scrappy beasts at their feet is really too much.

When the predators are gone, who will balance nature? Man is the greatest predator of all, via his mechanized weaponry. But he is not so large that he cannot be felled by a planet too far out of balance, and by the tiniest of biological threats.

posted by rangeragainstwar at 8:49 PM

that is a disgusting practice. i'm glad that folks are putting a stop to it.

despite the hue and cry that arises over presumed predation, when you try to pin the haters down, most of them can't come up with a single incident of wolf or coyote predation that did more than inconvenience a rancher or two.

on the free range cattle of our reservation we saw increases when the wolves were reintroduced. wolves main prey is rabbits, mice, and other rodents. keeping them in better check increases the forage for deer, elk, and cattle.

the service that they provide (even urban coyotes do a fine job of keeping edible stuff picked up and cleaning off roadkill carcasses) far outweighs the dangers.

the coyote is one of the only animals which has expanded its range and numbers since the arrival of the europeans.

they don't deserve this kind of brutality.

(southerners are quite fond of that shit. i mean, micheal vick did fucking time for dog fighting, why is this different?)

MB,
There was a special on the O regime taking the wolf off of the protected species list.
It was on David Broncaccio and was informative and sad.
Why do guys like us side with the predators??? UMMMM....
jim

i think some of that affinity is the ability to see those who are like ourselves.

although humans could learn a whole lot from coyotes and wolves. the social and tribal culture of the apache owes more to the wolf and coyote than it does to other humans.

my son, by virtue of his chosen trade as a hunting guide, spends a lot of the summers out in the woods, following and charting the elk and other game. that allows him lots of time to observe the other critters. he knows the various packs of wolf and coyote, he even says that he can see some of the shifting alliances and parting of ways between them.

but, one thing that they have over us humans is that they don't go to war and kill each other.

dominance struggles within a pack are generally bloodless contests. after all the survival of the pack might depend on an extra nose or extra set of teeth. pack on pack rivalries are usually settled like old fashioned gang "rumbles." there might be a bloody nose here, a cut lip there, but there is a minimum of death dealing.

a lot of the prejudice against the wolves and coyotes is merely traditional. study shows that rather than harm things like farming and ranching, they actually improve those conditions.

there has never, in human history, been a recorded coyote attack that was not the result of rabies or other serious illness.

there's an apache proverb that says

Yes, coyote is the great trickster. Interesting that your son can witness their shifting alliances.

Perhaps it is because man is so untrustworthy that he imputes mindless attacks to the wild animals, yet as you say, there is almost always a reason behind such attacks -- illness or encroachment of territory and lack of forage.

My father, who grew up pot-hunting during the Depression, had a pretty exacting standard.

"You shoot something, you kill it," he would caution me, "and if you kill it, you eat it."

When acting out of pure teenage stupidity I shot an raccoon, he stood over me whilst I cleaned it, hung it, butchered it and fried up a haunch in a mess of bacon grease. He let it go after I ate three bites of it.

Mind you, do it with your teeth and nails and I'd be impressed. Or teach the predators to operate a bolt-action rifle. Otherwise? Meh.

Chief,
we do teach the predators to use bolt action rifles-we call them snipers and swat teams.
jim