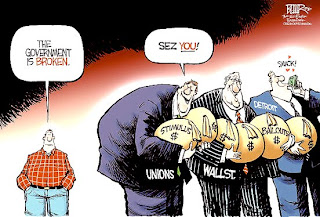 [Capitalists] put me in mind of some men I have seen who,
when they had the chance to buy a
widow's cow for ten cents on the dollar of her real value in cash,
would then make the purchase,
and then thank the Lord that he had so blessed them.
Such men belong to the class of Christians
referred to on one occasion by Charles Gunn; and, if you will excuse me,
I will tell you what he
said about them. He said that 'hell is full of such Christians'
--Working Toward Zion, Brigham Young

My name i' Borat, I come a-from Kazakhstan.
Can I say a-first, we support your War of Terror.
May we show our support for our boys in Iraq.
May U.S. and A kill every single terrorist.
May George Bush a-drink the blood of every single
man, woman, and child of Iraq [crowd cheers]
--Borat (2006)

Greed is good
--Gordon Gekko
_________________
There are things that we reflexively subscribe to in America. Among these maxims are, Babies are Cute, Free Markets and Capitalism are Essential Elements of our Democracy, and Government Must Stimulate the Economy During Times of Economic downturn.

First: Babies are not cute. They are ugly wrinkles of flesh, mottled and occasionally spotted with hair, gifted with shrieking lung capacities far exceeding their size. With their large, misshapen heads and vacant stares, a few en masse could easily make for midget nemeses in a zombie movie.

If we were honest, we would say they were large, maggot-like sacs of ego until they bust out and reach an age of compassion; not all will make it, though society will use them, nonetheless. (But of course, we're not honest, and proprietary interests coupled with a lack of interesting other issues make the zombie babies the go-to topic for every family.)

Were it not for the assiduous application of Johnson's products and take-away nappies, they would smell and flake, with a flourish for directing mashed food into their body folds. If their putrid daily routines were witnessed in an elderly care facility, the viewer would assuredly NOT be cooing.

Second: Free market capitalism is a social as well as an economic relationship. We have unbridled faith in capitalism, except when we don't. These reactions are always based on jump-through-the-ass panic fomented by our Leaders. It is difficult to unravel the social and economic interplay, but we want to focus on stimulus spending.

Third: The very future of our nation and the welfare of America devolves to stimulus spending. However, if we actually believed in capitalism, this stimulus concept would be anathema.

Capitalism is based upon a long-forgotten and basic concept: There will always be winners and losers, and this fact is essential to progress. The losers either change, or are left behind. The idea of a stimulus that will bring everyone along is a chimera pandering to the masses, but actually only benefiting those who know how to prosper anyway.

The concept of stimulus only passes muster IF the government has the money to spend to stimulate growth and prosperity. It makes no sense to borrow money that we do not have to maybe improve the situation.

There is no indication that any of the expenditures have trickled down to the unemployed worker level. The New York Times reported on the New Poor, who can expect to stay that way, many without a safety net, for years to come. But there is plenty of indication that the the economic sectors in which the Big Fish swim have benefited mightily.

The current economic dogma says essentially when free market capitalism screws up in a Big Way, government should pull our collective bacon out of the fire by doing something that exactly opposes our philosophical underpinnings. Meanwhile, Keynes is still dead. We expect government to become the economy.

That's not good, and it's bad.

posted by rangeragainstwar at 9:54 PM

never forget though, the complimentary extension of robbing peter to pay paul.

if you rob peter, to pay paul,

paul's got your back.

But fer sure, Peter's a comin'

(And maybe Paul just hightails it with the loot.)

Hi Jim and Lisa,
Good post. Bits of this ism and bits of that ism, this ideologically adrift country is desperately in need of a good long bout of clarification of concepts.

Thing is, you can either have unfettered capitalism, or you can have social peace.

But you can't have both.

Because the "big lie" of capitalism is that the "losers" of the economic wars will pick themselves up, reinvent themselves ("change") and win the next round. Look at the first fifty years of capitalism and marvel at the sheer variety of ways that people can rape and fuck over each other in pursuit of a crappy handful of pennies. The story of capitalism is a merciless fight between the magnates trying to screw an extra minutes' work out of the proles for nothing and the workers, getting starved and killed in pursuit of the stuff we take for granted, like working in a place note designed to kill you for a decent wage for less than 24/7/365...

And then, having screwed their workers and the public, the malefactors of great wealth then speculate the economy into a bubble, reap the profits before it crashes, and leaves the poor sods to starve after the ruin.

Let's not confuse the specific with the general. Keynes has done much to preserve the social stability of the post-WW2 world. But his prescriptions depend on governments being prudent and saving during good times to have a cushion during bad times. In 2000 we elected a man whose good idea it was to spend like a sailor in a whorehouse and stop collecting taxes. Not surprisingly, this placed us in the debt and deficit hole we're in right now.

Hate the dumb fucker, but let's not confuse his stupidity with an endorsement of capitalism with the bark off. It's not pretty, as any steelworker in Scranton could have told you in 1899...

We all know that Bush wasn't the greatest president and that he has his set-backs and spent a lot of money. Now, lets look at who is in office now. He has made many promises that he hasn't kept and continues to lie. He promised a 'transparent government', unemployment to not rise above 8%, and 'change'.

If you think Bush spent like a 'sailor in a whorehouse'...let's look at Obama. He has spent more money in his first 4 months as president than all the presidents from George Washington to George W Bush combined.

Only 6% of the U.S. believes the first, almost trillion dollar, stimulus bill actually worked. Obama promised 3 million jobs to be created and we got only 85,000. Unemployment was not supposed to go above 8%, and it's now 10. The corrupt organization ACORN has improperly/illegally using our tax-payers money to 'help reform' America in Obama's promise of CHANGE.

Obama spoke to the people of ACORN saying he has been with them the whole step of the way, even when he was in the Senate. Now that corruption has been uncovered, he denies being a part of them other than the one small period of time he was a lawyer for them. He claims that he was not aware that they were even receiving stimulus funds(which i find hard to believe), which when corruption was revealed, congress voted to cut funding immediately to the organization.

So Obama is lying, and Congress has way to much power for their own good. I am also not sure what educated person would tell you, "if you are having problems with debt and paying your bills, just borrow more." If we think things are bad now, wait til all this printing of money causes the inevitable inflation we all fear.

The destruction of the U.S. dollar is around the corner, and our government is being run by socialist progressives that are being advised by communists.

Obama, during his campaign for president, was asked a question, "Mr. Obama, how will handle situations that present themselves to you if you become president?" Obama's response was, "look at those who I surround myself with..."

He couldn't even give a straight answer as to how he as president would do things and instead, basically, said, "I don't know, ask this other guy."

I think Obama is more of problem than Bush ever has been. It's only been a little over a year and these promises of CHANGE are not what the American people expected the CHANGE to be.