RANGER AGAINST WAR: Rock and Roll Will Never Die <

Rock and Roll Will Never Die 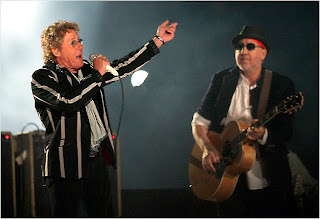 --The Who, Super Bowl XLIV
Let's get together
Before we get much older
--Teenage Wasteland (Baba O’Riley),
The Who

If you gotta play at garden parties,
I wish you a lotta luck
But if memories were all I sang,
I rather drive a truck
--Garden Party, Ricky Nelson

Ranger does not watch pro sports, and does not give a rat's ass about the Super Bowl, but The Who's 11-minute half time show deserves a comment.

The Who, a 46-year old rock band, played a medley of their hits, to include Teenage Wasteland about adolescent angst. So strange, as Daltrey and Townshend, like Ranger, are pushing their mid-sixties and such memories are a blur to a blurry mind. These rock geezers as The New York Times calls them are not aging gracefully.

To compare them with one of their peers, at least the Beatles possessed some self-deprecating humor. When asked if they were Mods or Rockers, the ever-cheeky Lennon replied, "We're neither; we're Mockers." Now that's a stance that can take you into old age, and Lennon's last album showed evolution. "I'm just sitting here watching the wheels go round and round" shows some humility and self-understanding.

But the half-time Who refused to age. It is bizarre to watch a group (of which 50% are dead) trying so hard to remain teenage misfits, Daltrey in full Fleet Street regalia, dyed blonde locks cascading past a weathered face; Townshend hiding behind shav boy watch cap and glasses, trying to look very Slim Shady, but sadly just looking shady.

Does our society demand the perpetual boy? Once emblematic of an era, is a person or group disallowed from maturation? Or is it a reluctance on the part of the one who felt that glory to relinquish it? Or is it simply the venue, The Superbowl which, in itself is a wasteland: A place of gridiron "warriors" through whom the nacho-eating set vicariously fight their battles.

But there comes a time when a man must realize that he is no longer young, no matter how many roadblocks to his maturation he may claim, or how hard he tries to obscure the fact. There ain't no teenage angst when you're 65. Teenage angst does not hang well on a grizzled 65-year-old body.

The Who wrote 40 years ago in "My Generation": Hope I die before I get old, sharing with The Stones the fashionable "trust no one over 30" card. The Beatles had a more balanced view. In their "When I'm 64," they posed the plaintive question, "Will you still need me?" knowing that age was inevitable, and continuing desirability not promised.

Well, for the eternally juvenile Who, two out of four ain't bad.

Labels: The Who half time show

posted by rangeragainstwar at 9:04 PM

"Ranger does not watch pro sports, and does not give a rat's ass about the Super Bowl"

Glad to see I'm not the only one!

"In the days of my youth, I was told what it means to be a man,
Now I've reached that age, I've tried to do all those things the best I can."
Led Zeppelin(Good Times Bad Times)

Yeah I'm not sure that relates to the Who's performance really but it started plying in my head just now.

while they were ripping off all the good licks and tunes from folks like willie dixon, muddy waters, bo diddly, professor longhair, chuck berry, little richard, james brown and a whole host of groundbreaking performers who never received much credit or any royalties, most of the brits forgot to do the aging gracefully in the music part.

when i think of some of the true and wonderful gentlemen i have been lucky enough to work with, like furry lewis, john hurt, papa john creach, bb, and how papa john was performing well into his 80's, then look at the fools like the who, or a botoxed and collagened mick jagger screaming bout how he still can't get no satisfaction.

i'm like dude, if you are filthy rich, and can't get no satisfaction at your age (which is perilously close to my own), you missed out on some good conseling somewhere along the line.

growing old is part of life, and part of this business. shit, i have to play sitting down a lot of the time now.

if you don't learn as you live, what's the fucking point yo?

Hi Jim and Lisa,
As to sports and rat's asses, Carpenter concurs.
Good post, as always.

I don't mind aging rockers who continue to perform as long as their music continues to grow with them. There's way too much good music available in the present for me to spend time listening to stuff from 40 years ago.

'rock geezers' indeed. Caught myself in a contorted wince while watching, embarassed as Daltry tripped up on lyrics and Townsend's belly jiggles while attempting to duplicate his formerly energetic and fluid arm swings.

You freaking Boomers crack me up...:)

Ranger Hazen,
IF you pay especial close to us old boomers you might just learn sumpin'.
Just maybe.
The first lesson is -don't fuck with the lone Ranger.
jim

Long Time RN,
I've been to WHO concerts when Pete's right hand was dripping blood from banging his guitar.
For some reason i almost expected him to smash his Fender when he was trough using it.
He has put on some weight, but i prefer not to comment on this since my gut is worse than his.
jim

While I love The Who's work, trotting out The Who Remnants for the Super Bowl Halftime Show was bad.

It's been 40 years since their albums dominated the music scene. It's time for new blood and 21st century musicians.

Especially in a sport like Football, which is not kind to aged stars and implicitly radiates that Youth Triumphs.

It's not as if, Y.A Tittle and George Blanda were the quarterbacks...

Come to think of it, if The Who had merely played Young Man Blues and then slowly allowed the lights to fade as a single Pete Townshend note slowly became inaudible that would have been brilliant...

THAT would've been brilliant.


Smart lad, to slip betimes away

From fields where glory does not stay,

And early though the laurel grows

It withers quicker than the rose