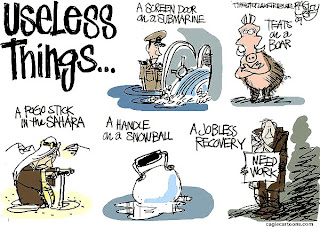 We're not doing the world any good when
we bankrupt ourselves fighting wars all over the place.
We will extinguish the great beacon that we are
--Henry Clay

There is a condition worse than blindness,
and that is, seeing something that isn't there
--Thomas Hardy

Living is easy with eyes closed,
Misunderstanding all you see
--Strawberry Fields Forever, The Beatles
________________
Or, misunderestimating, if you're a President.

President Obama recently recommitted to addressing the unemployment issue in these United States of the Un- and Underemployed. Now, finally we're gonna solve this problem, right?

Ranger will seek recourse to his limited knowledge of warfare and tactics to understand our present circumstances. First, the president does not have the initiative, nor does he control the pace of operations. U.S. policy is now reactive -- not a formula for success. We are like the apocryphal boy who stuck his finger in the dike.

Beyond applying the principles of war, let's talk securing the perimeter of your patrol base. Patrol Leader Obama cannot secure our perimeter because he is squandering assets and lacks focus as to the mission which needs to be accomplished. He is reacting helter-skelter, spinning like a non-snow tire in the D.C. Snowocalypse.

Borrowing technology from our flailing auto industry, Obama needs General Motors to install a limited slip differential into his policies. This might give him some much-needed traction, but G.M. can't tinker with policy.

The inner perimeter of America cannot be secured while its assets are thrown into the money pits of Haiti, Afghanistan, Somalia, North Korea, Yemen, Iraq, Pakistan or any other nation that pops into our radar screen as the sound bite du jour.

Our President is elected by The People to serve The People (of the U.S.A.) He is responsible for our perimeter; far-flung distractions are counterproductive to our national health and welfare.
How does offering cash bribes to buy mercenary hearts and minds in Afghanistan help our national health and welfare? The unemployed folks in our patrol base would sure welcome the same handout.

The welfare of Americans is the job of the president. Forget the happy horseshit propaganda coming out of Afghanistan.

We may win the battle of Afghanistan, but to what end if we have lost the war in the streets of America?

posted by rangeragainstwar at 7:21 AM

I confess I hadn't thought of it before... but why aren't Americans being paid to not set roadside bombs?

Interesting to read a ground pounder perspective on the economy.

I would say that the Obama admin. is also failing to adhere to the core pricinples of joint intelligence operations as well; which surely can be made to apply just as readily -and perhaps should be first and foremost - if you can accept that there are enemies of the working people's economic interests both "inside the wire" as well as outside of it (which I, personally, do).

The fundamental responsibility of intelligence is to provide decisionmakers at all levels of command the fullest possible understanding of the adversary. This understanding includes a sophisticated knowledge of the adversary's goals, objectives, strategy, intentions, capabilities, methods of operation, vulnerabilities, and sense of value and loss. The J-2 must understand the adversary's character, culture, social norms, customs and traditions, language, and history. Understanding how an adversary will conceptualize the situation, the options to be considered, and how the adversary will react to our actions should be an inextricable part of a continuing interaction of the intelligence staff with the JFC and other staff elements. This comprehensive understanding is essential to (1) recognizing challenges to our national security interest; (2) establishing security policy; (3) when appropriate, formulating relevant and attainable military objectives and strategy; (4) determining, planning, and conducting operations that will help attain US policy objectives, and (5) identifying the adversary's strategic and operational centers of gravity.

I see no evidence that anyone is doing any of this this critical work. There isn't even an apparent willingness to do it. I think this is because all levels of command have been penetrated by enemy plants and assorted other species of mole.

I had not thought about this intelligence function: Knowing the enemy's "sense of value and loss". I wonder how many Americans have pondered their own values recently.

I appreciated your entire post, which offers another excellent analogy to the failings of recent administrations. Very clear-cut, and provocative.

Avedis,
This is not a ground pounders take on the economy-i'm talking about securing our base perimeter.
You must come to milpub where we discuss these things daily.Intel is a big topic.
Your thots on theater J2 functions should include lack of coordination with DOS.
I'm glad that you can understand grunteze.
jim

Hi Jim and Lisa,
Great post! Why is it that we see these things and the Washington crowd doesn't, or doesn't care, if they do? You've given me an idea, though. Ima get me a turbin hat and go to Afghanistan. Perhaps I can find carpenter work there. There sure isn't any here.

Yes, lots o' contractor work for you. Though it may gall you to build schools or military housing over there while your one-fertile state of NV suffers the highest foreclosure rate in the nation (followed by us here in FL.)

Ironically, I had recently come across that Sun Tzu passage.

"Thousands of U.S. Marines, British soldiers and Afghan troops Saturday launched a major offensive on Marjah and the surrounding district, described as the last Taliban stronghold in Helmand province, Afghanistan's most violent."

"Marjah, an area of lush farmland criss-crossed by canals is located in the center of Helmand province in Afghanistan's south. It has been a recruiting ground for insurgents and has been known for poppy cultivation for many years."

POLT,
This opn will do nothing except get people killed on both sides.
It's a useless effort.
jim

Dave,
There is plenty of carpenter work here in the Homeland, the problem is that nobody has money to pay for your services.
Two different things.
jim