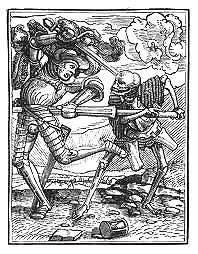 But above all, do not assume
that the war is over, because it never is.
The zombies you kill today
will merely be replaced by the zombies of tomorrow.
--How Modern Life is Like a Zombie Onslaught

Her eyes are formed of emptiness and shade.
Her skull, with flowers so deftly decked about,
Upon her dainty vertebrae is swayed.
Oh what a charm when nullity tricks out!
--Flowers of Evil, Charles Baudelaire

You shall not worship them or serve them;
for I, the Lord your God, am a jealous God,
visiting the iniquity of the fathers on the children
--Exodus 20:5
__________________
Ranger and Lisa viewed A Film Unfinished, an overview of the German May 1942 filming of the squalor of life in the Warsaw Jewish Ghetto. Whatever the German's purpose for filming their atrocity is unknown, but the product is a stark indictment of their savagery and inhumanity.

Questions of universal humanity or its absence arise. 68 years later the U.S. is patrolling the ghettos of Afghanistan and Iraq. While not starving the people, we are imposing our will upon their social order. The grimness of Warsaw Ghetto and the Final Solution arose 34 scant years after the U.S. fought a War to End All Wars, a war to hopefully secure a democratic future for the world. 92 years hence, the U.S. seems to have lost its grasp on that concept.

And how does terrorism play into all of this? Is terrorism a good thing in certain situations, like the dire one of the Warsaw Ghetto? Does man have the responsibility to fight state-sponsored terrorism with this main weapon of the dispossessed? Does this imply that terrorism in an outgrowth of terrorism, a spiraling cycle of violence and dance of death?

The Ghetto of 1942 was a hell hole, but imagine the same place in '43 and '44 where the violence served no purpose other than genocide. Both the Jews and the Poles adopted terror tactics to address the German genocide -- who can criticize these actions? They utilized terror as surely as did the British Special Operations Executives (SOE) and the US Office of Strategic Services (OSS). The U.S. emulated the terror to which we were opposed; terror is often a logical choice in a grim situation.

Terror is not the black-and-white issue we try to make it. Terror is multi-facted, the only sure thing being that terror begets more terror, the Phony War on Terror (PWOT ©) illustrating this point.

The Ghetto documentary was stark, as only an ugly truth can be. It gave the lie to all the warm and fuzzy Hollywood films like "The Pianist", "Life is Beautiful", "Defiance" et. al. which transformed ghetto life into an idealized form stripped of its relentless brutality.

This German idea of art film rectified those images in our minds.

posted by rangeragainstwar at 12:41 PM