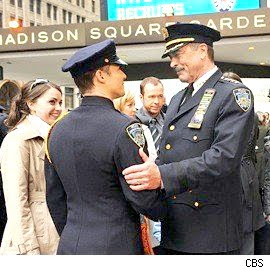 Your entertainment feature of the week concerns the highly mediocre police television series, Blue Bloods, concerning a New York City police family devoted to public service and getting the bad guys. Unlike so many law and orde type series today, this one promised no terrorist hype, and the possibility of some psychological drama. Alas, it was not to be.

Ranger is a fan of the underrated Tom Selleck, patriarch of the fictional Blue Bloods. He is a fan of the mystery genre, and thought Selleck was well-cast in a recent mini-series as the ever-pensive police character Jesse Stone. But the reason Selleck worked as Stone was the same reason he worked as Magnum P.I.: Selleck is a hale fellow well-met, working on the fringes, not exactly by the book. A ladies man just out of reach, his feelings drowned in the bottle or other pasttimes (hence, his name, stone).

In the new series, Selleck is cast as New York police commissioner Frank Reagan -- a straight-up guy, with a side-affair with a journalist on the police beat, a feeble attempt to keep his bad-boy aspect.

The show went wrong on so many fronts. Blue Bloods is typical of so many inadequate police and detective series today, and gains Ranger's ire due to its horrible miscasting of Selleck in what should be his glory moment. Instead, he is forced into his worst self: a wooden scion of a family of cops, playing good family man to this do-right crew. This is Magnum, fergawdssakes -- he drinks Mai Tais and drives a Ferrari 308 GTS!

Yet, the series will probably swim based on its formula: A family of policeman plus a liberal attorney all out to do good by society. They congregate over dinner each night, and the young-uns offers such homey platitudes as "I wanna be a policeman, just like Uncle ..." This is the Waltons, with guns.

That is what it is to live in 2011 in the U.S.: Fighting crime is a way of life. Our own Blue Bloods are those who fight the good fight daily; an aristocracy which is ever vigilant, confronting evil wherever it lurks. They can and will save society because they are gutsy, gunsy and believe in the God of Christianity, evidenced by their meal time blessing.

Can there be a better formula for success?

posted by rangeragainstwar at 10:35 PM