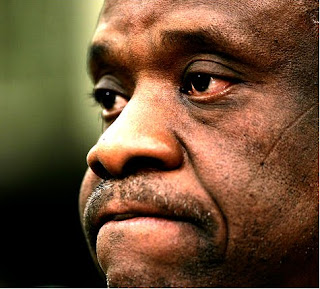 Equal opportunity means everyone
will have a fair chance at being incompetent.
--The Peter Principle,
Laurence J. Peter

Judge Clarence Thomas:
Well.. I mainly spoke about a favorite of mine,
called "The Hind-Lick Manuever"

As the Supreme court returned week from its midwinter break, it will have been five years since Justice Clarence Thomas has spoken during a court argument -- five years (No Argument: Thomas Keeps 5-Year Silence).

"If he is true to form, Justice Thomas will spend the arguments as he always does: leaning back in his chair, staring at the ceiling, rubbing his eyes, whispering to Justice Stephen G. Breyer, consulting papers and looking a little irritated and a little bored. He will ask no questions.

"In the past 40 years, no other justice has gone an entire term, much less five, without speaking at least once during arguments ... "

Talk about a cushy job appointment. As we consider the fate of the nation, it seems like we need every able body to be performing some work commensurate with one's ability.

Justice Clarence Thomas, the embodiment of Peter's Principle, Pareto's Principle and then some. Perhaps his best work was done when he was known as Long Dong Silver, his perennial joking of that era indicating he had already reached his level of incompetence, according to Mr. Peter (the other one). Of course, we noted Clarence's reticence a few years back (He's No Fool).

Sadly now, Thomas has been advanced beyond his apex, and his life can no longer be fun again in that same way, alas.

Yeah, he's a fraud. I'm sure the 1"s since(or before) aren't the best & brightest either.

If there was ever an 'affirmative action hire', he's it. Useless as tits on a boar. Except to the Koch Bros., Dick Armey, and Citizens United, that is.