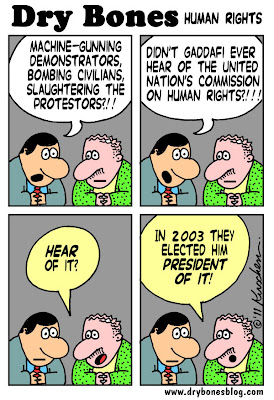 Turnaround, every now and then I know
you'll never be the boy you always

you wanted to be
--Total Eclipse of the Heart, Bonnie Tyler
____________________
Everyone's entranced and distracted with the disruption to daily life they see in the Middle East. Maybe even a little heartened that common folk can fight the power, while probably mistakenly believing that something that looks like the American Revolution is in the making.

The hubris is ponderous -- even egregious. The WaPo's Jim Hoagland says going up in flames would be "a fitting end for the criminal you have become." It seems he, like Casablanca's Captain Renault, is positively shocked the Brother Colonel has ended up so badly.

Have become? The present perfect tense is incorrect. Correct: " . . . the criminal you are, were and always have been." My, how naive Hoagland must be to think Moammar has become a bad guy.

What was the U.S. thinking when it invited criminals like Qaddafy to the Good Guys table? Bad guys don't suddenly grow a conscience and become good; they'll sit there and take the goodies all the while thinking they can gobsmack you.

And while the United Nations dithers about the possibility of charging Qadaffi with crimes against humanity while we tie ourselves up talking down these suddenly-appeared rogue monsters, why don't we whip out the birch switches and fillip ourselves?

The monsters in our midst -- Former President George W. Bush, Vice President Cheney and Company -- have never been held to account for their crimes against humanity, after all . . .a legacy which keeps on giving in 2011 and beyond.

"Out of these troubled times, our fifth objective - a New World Order - can emerge. . . Now, we can see a New World Order coming into view. A world in which there is a very real prospect for a New World Order. . .A world where the United Nations, freed from a Cold War stalemate, is poised to fulfill the historic vision of its founders"

Can you honestly believe this current uproar in the ME and elsewhere is not part of a twisted world wide plan by the usual suspects?
Interesting times, indeed.

Really . . . why are the Libyans in turmoil? Why not Saudi Arabia, for the House of Saud is far more oppressive of the people.

Lisa, et.al.,
Saudi Arabia's King Abdullah on Wednesday announced a series of benefits for citizens amounting to $10.7 billion, as he returned to the country after he spent three months abroad for health treatment, state television reported.
Tehran Times

Wouldn't it be nice if, on the gift card to the S.A. people he apologizes for the gift being late, and that he'd meant to give it all along . . . (That is what insincere people DO, isn't it?)

JJ Cale says- you can buy friends for SMALL CHANGE.
Dylan says that money doesn't talk -it swears. I think that was on MAGGIES FARM.
Thanks for your comments.
jim

Why don't you ask the Ikwhan Bedu that question? Oh, wait, we can't...

Many in the Arabian world have done well for themselves in the *souk*, but few have mastered every aspect of doing whatever it takes to dominate, as have the sons of Saud/Wahhab.

Thanks for the reminder on the Ikhwan. Yes, the sons of Saud/Wahhab have done well. I think we in the West (who forget history) have little idea of the fierce brutality which is the pride and justice of these tribal people, and they have no qualms of meting it out.

I have heard so much ignorance from soft Americans who believe the tribal peoples shall be wowed by our coarse and vulgar cultural accouterments (cable t.v., etc.).