RANGER AGAINST WAR: Haze of Rhetoric < 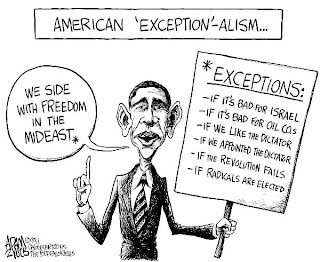 We are more often frightened than hurt;
and we suffer more from imagination
than from reality
--Lucius Annaeus Seneca

Gotta get down to it.
Soldiers are cutting us down.
Should have been done long ago
--Ohio, C,S,N & Y

All the Japanese with their yen
The party boys call the Kremlin
And the Chinese know (oh whey oh)
They walk the line like Egyptian
--Walk Like an Egyptian, the Bangles
____________________

Ranger Question of the Day (RQOD):
Would U.S. police allow demonstrations of the magnitude
of those in Egypt on Pennsylvania Avenue?
____________________
The U.S. that is trying to steer Egypt's government on moral and democratic behavior vis-a-vis their protesters and/or angry mobs is suffering a serious amnesia in regards to democratic behavior.

This amnesia is a result of the mass hysteria enveloping the Phony War on Terror (PWOT ©) which has allowed for the degradation of our founding principles. The U.S. is the apostle of international armed overreaction, yet we shamefacedly promote prudence to other nations. Our words do not accord with our actions. Likewise, no form of government should be expected to tolerate violent riots; democracy does not issue from this source.

Protesters do have a right of assembly if they are peaceful, yet in America we have created a new society in which protesters are limited to zones strictly cordoned off by the police. Protest around our leaders is not tolerated and protesters are routinely arrested and removed from public events -- a protest can be large but if avoided by the press, may as well have never happened.

Diligent reader and friend tw shared the non-coverage of an anti-war protest in D.C. last December, noted only, it seems, by a humble blogger:

"About 135 people were arrested yesterday in an anti-war protest outside the White House. This came as President Obama was revealing a new report that touted progress in the war in Afghanistan. ... (t)his act of civil disobediance [sic] and arrests apparently are [sic] not news.

But while protest in America has died an ignominious death, the U.S. has the gall to encourage Egyptian leaders to accept protest of their government, all the while crouching like the Cheshire Cat, knowing the tanks and armaments wielded by the Egyptian authorities were fronted by them. Egyptian repression is facilitated by U.S. policy

Our advice is disingenuous. The U.S. has created phony villes of Democracy in Iraq and Afghanistan by the barrel of a gun and the bribe of cash and materiel, yet we would moralize to the Egyptians. The Egyptians, who have tortured prisoners for us in our extra-legal renditions.
We will use their non-democratic features when it behooves us, then come out from behind the skirt and admonish them to be kind and forbearing when their power structure is threatened.

U.S. tax dollars have funded and facilitated dictatorial brutality in the region, and we become poseurs when we pretend it is otherwise.

Dr. Paul, love him or hate him, is right about Egypt.

Cindy Sheehan had a anti war demonstration in Washington not too long ago that attracted thousands and also got no coverage.

Speaking of coverage Lisa, I just had to redo my TV programming. To my delight I got Al Jazeera English News. Great coverage of what's going on in the Middle East and around the world. I've always read them on the internet http://english.aljazeera.net/ and found them fair and informative. As far as credibility, the Bush regime had a propaganda campaign against them and even bombed them in Baghdad the first days of the war. Mubarak has shut them down in Egypt along with the internet. Got to be a theme there. I find Canadian news coverage better than American news coverage too. We seem to report the news not create it.

Here’s a tidbit I found encouraging. Seems Bush had to cancel his trip to Switzerland for fear of being arrested. First the Spanish, now the Swiss. Of course, we’d never allow anything like this.

Thanks yet again, tw.

We have often wondered how any members of Bush & Co. can travel abroad without detention. How must it feel when the shoe is on the other foot?

Agreed, our disinterested media news left long ago, and one must cobble together some truth by scanning international outlets.

Lisa - Al Jazeera English is good and I find Russia Today not bad either (once you get past their decided nationalistic bias).

In addition, The Jerusalem Post and Ha'Aretz provide valuable info. from the Israeli side.

Red Leg,
There's a entry over at milpub today by Seydlitz .
I think you may be interested.
As always- thanks for staying with us.
jim