RANGER AGAINST WAR: Population At Large < 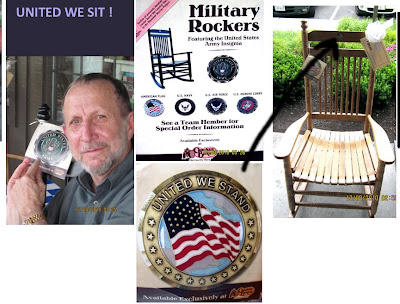 ______________________
Ranger recently happened upon a Cracker Barrel initiative -- "United We Stand" insignias in their homey front porch rockers, with a portion of the proceeds going to the Wounded Warrior Project. Fair enough.

But if you have happened upon a Cracker Barrel in your travels you know the denizens share a certain . . . style, for lack of a better word. Indeed they are a microcosm of a large swath of America. This caused Ranger to wonder, and, extrapolating to the population at large, he thought:

posted by rangeragainstwar at 7:34 AM

Ooh, Ooh, I want one! I want to be a real rootin' tootin' Rockin' Chair Ranger!

barca,
Strangely they do NOT give a military discount.
Everybody loves the military when we're paying full price.
I don't laugh often at comments, but i enjoyed your comment-now i'm a rocking chair ranger.
That sums it up perfectly.
Rockers lead the way.
jim

By this, do you mean Cracker Barrel is frequented by folks who, if you told them to "haul ass," they'd have to do it in two loads?

Ranger, it's my studied opinion that if you go to Cracker Barrel, you deserve whatever you might get.

And I actually think those rockers are mighty handsome. Think I'll mosey on down and get a couple for Maw and me to while away those lazy hazy nights out on the veranda. Might even get a yummy meat loaf dinner while I'm there.

And that is why you would do so well undercover, P. -- you hide your thinly-veiled disdain so well, and can easily blend in as just another one of the volk (sans the unfortunate burden of the avoirdupois.)