RANGER AGAINST WAR: Pears for Petunia < 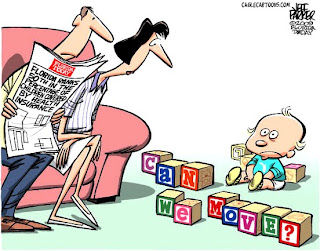 Just remember, if you're not one up
on the other fellow, then he's one up on you
--School for Scoundrels (1960)

But it's all right now, I learned my lesson well.
You see, ya can't please everyone,
so ya got to please yourself
--Garden Party, Ricky Nelson

Florida: The Rules are Different Here
--Defunct Tourist Board slogan
_______________________
The Sunshine State has long been the favored land of grifters. These carpetbaggers speak the tongue of the Northern retirees, and can fleece the defrosted, deracinated rubes with ease.

If your aspirations are small, a pickup truck, 5-gallon bucket, some tar paper and book of receipts for promised driveway or roof repairs never made, and gas to hoof it back to Michigan by the end of spring will suffice. But for those with bigger dreams, the large population of retirees is also ripe for health care fraud, and the permutations seem endless.

Lisa knows two cases personally. The smaller involved a group home in Ft. Lauderdale for developmentally-challenged adults, funded by Medicare and "run" (a term very loosely used) by a known drug dealer; the larger, a multi-hospital scam of substance abuse programs run by a friend's father for many years before being busted. Now, our own Governor Rick Scott proves in a uniquely Florida Horatio Alger-esque way that every malefactor may one day grow up to be head criminal.

Ezra Klein described Scott last week as "one of the most entertainingly shameless figures in American political life." Not only did Scott manage to resign before the $2 Billion judgment against his Columbia/HCA Healthcare, he is managing a "second act":

"Before running for office, he turned his $62 million stake in Solantic, the urgent-care clinic chain he founded after resigning from Columbia/HCA Healthcare, over to a trust in his wife’s name. Solantic doesn’t take traditional Medicaid, but it does work with the private HMOs that, under a 2005 pilot program, were allowed to contract with Medicaid. And Scott is now pushing a bill that would expand that program across the state making those HMOs — the ones Solantic works with — the norm for Medicaid.

"Asked about the apparent conflict of interest, Scott said, “If you look at everything that I want to accomplish in health care in Florida is basically what I’ve believed all my life. I believe in the principle that if you have more competition it will drive down the prices.” And I believe him. But he could have sold his stake in Solantic when he got into government. Since he didn’t, the fact remains that Scott is pushing a policy his family stands to profit from immensely . Which is, for Scott, real progress. In the 1990s, he made his money off single-payer health-care programs by cheating them. Today, he’s making his money off single-payer health-care programs by running them. No matter how you look at it, it’s a step up" (Rick Scott's Extremely Profitable Policy Proposal).

Is it coincidence that Solantic is an anagram for stoical? We see the new governor as intransigent in his view that Florida is the land of opportunity for those clever enough to exploit it. No qualms about privately profiting off his decisions as a public servant; stoicism is a great trait to possess in order to pull off the big swiz.

How could people elect a governor on the platform of reducing taxes when our state government is running a severe deficit? From whence will the needed funds arrive?

Governor Scott was elected on the basis of his contrived 12-Step-ish campaign ads explaining how he'd learned a lesson from his previous run-in, with mama by his side. Yeah -- like in every school for scoundrels, his criminality taught him how to do it better next time. Southerners do love them a good come-to-Jesus story, though.

Our fellow citizens voted for a known criminal, so good luck to them.

“If you look at everything that I want to accomplish in health care in Florida is basically what I’ve believed all my life."


Of course it is.

Why wouldn't feathering his own nest at the expense of the less fortunate, be a politician's lifelong ambition?