RANGER AGAINST WAR: The Crown of Creation <

The Crown of Creation 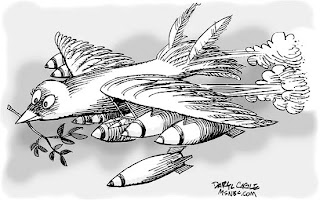 Tonight we trade
our vanity for insanity
--Charlie Sheen

We cannot have peace among men
whose hearts delight in killing any living creature.
By every act that glorifies or even tolerates
such moronic delight in killing
we set back the progress of humanity
-- Rachel Carson

Ranger recently acquired a WW II-captured P08 Luger with accessories from the grandson of a recently-deceased veteran. The pistol had no value to the man and he did not feel the need to keep the items.

Shooting the pistol yesterday I recognized it as a precision piece of advanced firearms engineering, mechanically complex and ergonomic, before CNC capabilities -- tight and efficient. (As an aside, the gun was designed before we had a clear definition of how a semi-automatic pistol should look or function. The toggle bolt was copied from the 1873 U.S. Winchester lever-action rifle and adopted to a recoil blowback system; pure mechanical genius.)

But, so what? Technological marvels of the 20th century abound. There was the P51 Mustang fighter escort, ground attacking aircraft. The Enola Gay sits in a place of honor in the Smithsonian. What they, like the Luger, Mauser, the MG 34 and 42 machine guns, share is their unity of purpose: to efficiently kill our fellow humans.

My Luger is a beautiful piece of nastiness highly-coveted in the collector world. As with all of the aforementioned items, they were the crown of creation of God's chosen species, and they all rain death. When these weapons were introduced the U.S. was not an electrified society and indoor plumbing -- much less cars -- was not a given. To keep it on a Ranger level, venereal disease was incurable and appendicitis along with other routine infections were killers. Children died young from common childhood ailments.

High school education was a luxury for the average person, but the manufacturers of death-dealing devices were decades ahead of commensurate civilian advances. The U.S., Germany, Belgium and the Czech areas armed the world, and everyone had a repeating long-range rifle available to them at a reasonable price.

Even as we were peddling Jesus to the natives we were arming them, too, before they even had proper clothing or reliable food. Christianity always flourished next to the firearms distribution centers of colonial precincts. The pictures in Ludwig Olsen's The Mauser Rifle show that the sign of arrival in most parts of the world, no matter how primitive, is the possession of a fine hand gun or other weapon (This is why Osama bin Laden is always photographed with his AK 74 ready to hand.)

Who could deny a God that arms his believers with such magical fire sticks? Such an item is a miracle akin to converting water to wine. We pretend to export culture, but really we export guns and violence, in the name of our God or creed.

Ranger is not against the use of weapons to justly defend one's person or country, but we must consider the brutality wrought by our fine technology. The march of civilization has often advanced at the end of a rifle, and this is worthy of consideration. Much as we revile Weapons of Mass Destruction (WMD), gunpowder-based weapons have killed far more people than has what we now call WMD's. Firearms are WMD's as wielded by the individual.

Richard Wright's "Almos'A Man" considered the idea succinctly, the naive protagonist "Dave" standing for all of mankind. After he gleefully feels the power of the shot, he realizes his mistake in shooting Jenny the mule, an innocent beast so vital to the farm, and helplessly packs the bullet wound with mud. He is overcome by guilt and shame, but there is no unshooting the poor beast.

For all of our fancy engineering, we are but children playing with morbid, murderous toys.

posted by rangeragainstwar at 10:44 AM

Thank you . . . was just thinking of you last night.

I think the neurosis you're hitting upon could be summed up in the following thought process, "If I don't make this weapon, the other guy will, and that crazy muthaf--er, who doesn't look or act like me, will destroy me and everything I love and worked so hard to create".

But we also know they are just like us. Which might be an even scarier thought. So we give them the tools to destroy the violent ones in themselves, even if it means losing so many innocent, then teach the survivors to forgive us for what we had to do to make them like the well-behaved us, which is a hypocrisy, because we know we're full of sh**. We're obviously just playing the odds here, and the guys at the controls were/are seriously bonkers with power.

I am also reminded of the Mormon story about the some dudes who make a huge profit from a widow that undersells her belongings, and thank God for their good fortune. I might have read it here, but basically it's reiterating the idea that just because someone says they believe in God, of their deeds they will be judged. Or something like that. Religion, as all creeds, can be used to manipulate decent people, but it can also be a great source of strength when the odds are against them.

Yes, that's part of the game. We'll never get it right until we stop looking outside for the answers.

Not to be New Agey, but if one really thinks about these things, some relationships become obvious. Sadly, we've been fed such a line from all sides: situational ethics (we can't know the Truth because there is none); we were all born sinners; etc. etc. So we do bad in the name of (our God / our appetitive drives / whatever) and strike a deal.

A real simple answer would be to stop the hell hurting each other, but we seem incapable of that.

So ... bring on the weapons, the lawyers and the Confessionals and carry on ... Like Warren Zevon sang, lawyers, guns and money will rescue you from most pinches.

Well, to be honest, nothing gets one inventing crazy ass sh-t like the fear of death and atrophy. To the moon, Alice.

Atrophy, yes -- that must be the worst, for you must live with that.

I guess it's damn the torpedoes and collect all the candy you can before you're flaccid (?)

I see what your point, but I'm not sure this is the right forum for your erotica.