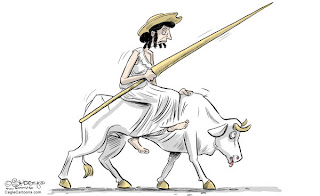 Old man, look at my life,
I'm a lot like you were
--Old Man, Neil Young

[I] am learning to shoot, beat, stomp and bayonet
another human being
--Elevich's letter to his mom, Letters Home

When you finally go back to your old hometown,
you find it wasn't the old home you missed
but your childhood
--Sam Ewing

Ranger recently met with fellow ROTC '68 classmate Dick Gill while in Ohio. We mused upon the fact that we all had the luxury and good fortune to have a few good years at college before being thrown into the mix.

Former Lt. Gill made the poignant observation, when asked about his faith, "How could I go back to being a good Quaker after killing so many people?" One can't go back, which is my point. Unless quantum mechanics proves otherwise, we move from this point forward.

Ranger suspects men like himself, Gill and Moor would pick up a rifle to defend the U.S. if we were threatened by a credible existential enemy. Problem is, good enemies are hard to find these days, and terrorists must serve as stand-ins. The Army should not be a make-work program.

This, is not worth one American Soldier's life.

posted by rangeragainstwar at 10:39 AM

you know my name

I still find no inconsistencies in the original Quaker tenets of Harmony and Integrity and so on, and taking the life of another.

That is just me, although one Quaker writer (Robert Lawrence Smith) reports that half the eligible Quaker men during WWII served, and they weren't all ambulance drivers.

Now taking the lives of others as a profession, will always be something else entirely.

In the day, when someone was headed "back to the world" before our own anointed time, after all the lies about "we'll get together, have a beer," good-bye usually went like this:
"Now, how you gonna act?"

After napalming peasants, shooting old women in rice paddies, herding villagers into concentration camps, while dumping Agent Orange on their forests, how we coming home?

How does anyone return "home " from war?

Returning to "the world" as we called it , is probably more apt.
We never came home from Vietnam: there was no home to return to.

No one ever returns "home" from war.

Oh, the place we came from, once called "home" didn't go anywhere. It was still there, but somehow the year in Vietnam had seized time and the someplace, flattened them both, silenced the hometown and it's inhabitants.
Nothing to talk with them about, nothing in common anymore. Somehow that thousand long year stripped away any commonalities from the past, giving me a new history and them none.

A few folk, mostly guys, would would ask about the war, usually no more than "did you kill anybody?"
They never got an answer, or a chance to ask another question.The look on my face usually answered it for them or told them to change the subject.

Even when I ran across the guys I 'd grown up with who'd been to Vietnam, and the even-fewer on the college campus, we wouldn't talk about the war. Comments were usually some military slang that would pop up when describing collegiate bureaucratic bullshit or the sheer dumbassedness of our fellow students. Or civilians in general.

When a serious inquiry would be directed toward me, I 'd give a monosyllabic answer or, staring off into space while formulating my response for such a length of time, any potential conversation would shimmer and be lost for good.

What was there to say?
War made a stranger out of me.
Even to myself.

We went to war in Vietnam to protect our "home". Tore down the other mans' country
and his home, lost ours in the shuffle.

Those of us who responded to our nation's call were expected to return "home' and get
on with our "normal' lives as if nothing had ever happened.

That's part of the lie.
The lie the nation told us.

"It is no measure of health to be well-adjusted to a profoundly sick society."
--J. Krishamurti

Wow. You've described in a way that this civilian gets.

I have always appreciated K's views on war. One can see that way when one becomes the objective observer.

“O lost,
And by the wind grieved,
Ghost,
Come back again.”

The love of October is a dark, mad, and persistent thing.

Thank you, Joan (my picture was taken on his front porch in Asheville.)

Dark, mad and persistent -- I like that. Since it turns chilly here overnight, I always feel a mad rush to do anything, everything, that can be done during this lovely sliver of time. Winter has it's own loveliness, but its is more of a stasis. Fall is radioactive.

Well, Carl, thanks for your compliment.
Much Appreciated,

Best to ya,
Deryle