RANGER AGAINST WAR: Dreams of Frustration < 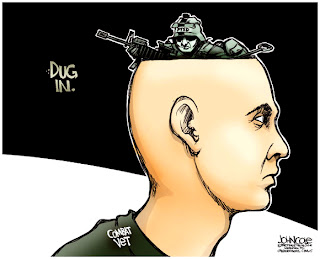 Oh! that my young life were a lasting dream!
My spirit not awakening, till the beam
Of an Eternity should bring the morrow.
Yes! tho' that long dream were of hopeless sorrow
--Dreams, Edgar Allen Poe

You will be required to do wrong
no matter where you go.
It is the basic condition of life,
to be required to violate your own identity
--Do Androids Dream of Electric Sheep?
Philip K. Dick

No! I am not Prince Hamlet, nor was meant to be;
Am an attendant lord, one that will do
To swell a progress, start a scene or two
Advise the prince; no doubt, an easy tool,
Deferential, glad to be of use,
Politic, cautious, and meticulous;
Full of high sentence, but a bit obtuse;
At times, indeed, almost ridiculous—
Almost, at times, the Fool
--The Love Song of J. Alfred Prufrock, T. S. Eliot
___________________


Ranger's dreams are filled with feelings of inadequacy and ineffectualness which run counter to the actuality of his lived experience; though a life is personal, it is lived in context and not isolation.  The frustration which cannot be cured may be the result of striving to do right in a not right situation.  To explain:

In the dreams, an inadequate Ranger-to-be is tossed out of his ROTC training due to some unperceived inadequacy despite the reality of his being a Distinguished Military Graduate who chose Infantry as his guaranteed first choice.  There are weapons failures and incorrect ammunition, events which never occurred in his reality.

Then there are the "inability" dreams in which he cannot perform his required duties.  Despite being Airborne, a Ranger and fully branch-qualified, the dreams reek of frustrated ineffectiveness.  Often, he awakes whimpering ... what is this about?

Though in the dreams he second-guesses his abilities, his nation behaved as though it never did.  Do his dreams of impotence mirror his frustration about functioning well within an ineffectual situation?   Is Ranger serving as proxy for the government manque he served? Do his dreams attempt restitution or atonement for an irredeemable situation?

What if in fact the Army is the ineffective agent, and Ranger's being swallowed by quicksand is his subconscious recognition of this?  The title effective cannot be bestowed upon a war that killed 58,000 and wounded more than 300,000 to absolutely no benefit for anyone or anything, to include the lizards (we joked that even a dead lizard accounted for a "kill", and kill ratios meant success, right?)

By his reckoning, the war was predicated upon an NVA PT boat attack upon a U.S. Destroyer, an event which may or may not have happened; our generation's "Remember the Maine".  Imagine the absurdity of a country that went to war after a massive attack on its naval fleet launching a war two decades later over a PT boat incident that did not produce even one casualty on either side.

The field of Ranger's dreams was a war that was not just, proportional or rational, in any event. Ranger's dreams were born of this frustrated event.  The dreams indict a generation of faulty institutional thought and strategic assumptions.

He is certain the dreams will endure until taps are played, such is the harvest of a misbegotten seed in the mind of a young soldier.

posted by rangeragainstwar at 10:15 PM

Soul-killing is what it is and like the old song goes --with a small change :

We could drag this one for awhile.
Hell, we've been dragging this one awhile.

There it is,
Deryle

It will be interesting to see who gets in on this one, and to what length? Or is it depth?

Thank you for your interest, Deryle ... I believe there is so much to say here.

I do hope we hear from others, no matter how tangential their experience.

I'll sound off for whatever it's worth. If Ranger can put his heart and soul out there, I guess i can too.

I had also been plagued for 20years +/- with a recurring dream not comletely unlike Ranger's that would seem to suggest some kind of internal sense of inadequacy. In it, I am in a life or death situation under attack by a fanatical murderous assailant (the setting varies). I am armed usually with a pistol, but sometimes a rifle. I get the drop on my enemy. He's in my sights. I squeeze the trigger and.....nothing happens. Then I am killed; often feeling the impact of my enemy's bullet or a hot firey pain as his knife enters my vitals. I wake up sweating and sometimes screaming.

I suppose a Freudian would knee jerk point to fears of sexual inadequacy (guns, stabbing and all). However, you'll have to take my word for this, I've never had any problems in that department. I've never felt any anxiety over my ability to perform.

I was in only one gunfight, many years ago, and my actions were all sop. Not an experience I would ever seek to repeat, but i handled it right.

Been in a few serious fistfights (again years ago) and I always handled myself well.

In my professional career, as in my family life, I am at least better than average at following through and getting the job done and done right and meeting repsonsibilities. I'm not falling down on the job. Evals confirm this.

So can the dreams be highlighting a literal concern? Maybe, but I tend to think not.

I've shot some wild dogs. I put down a beautiful and favorite yearling filly with a bullet to the brain after she broke her leg running around the pasture. The latter made me sick even though I knew it was the right and only thing to do at that point. Guns always worked fine. Why wouldn't they? I maintain them and their ammo properly.

Then my old yellow dog succumbed to artritis and old age. In the middle of the winter she was racked with pain, incontinent, howling randomly and snapping at my wife and I. I resolved to get her to vet asap. But as the night progressed and her condition worsened my wife urged me to put her down. I really didn't want to do it. That dog had been a loyal excellent friend. In fact, I resisted and my wife and I got into a heated argument. It was kind of insane actually. At some point I made a snap decsion, just fixed my mind, picked up a pistol and led the dog outside behind the barn. I said a goodbye to her and asked her to forgive me and aimed, squeezed the trigger and .....nothing happened. The hammer stuck - exactly as in my dreams. I examined the pistol, set my jaw and tried again. Nothing.

My relief was overwhelming. The dog came back inside with me and was euthanized at the vet the following morning. Also, the following morning i picked up the same pistol and, without having made any adjustments or maintenance, i went out back and squeezed the trigger. Three squeezes, three shots fired; just as it was made to do. i can't explain it.

After that day the dreams became fewer and farther between and, when they occurred, morphed to a better outcome and then, eventually, just stopped all together. I can't even remember the last time I had one along that theme.

It was all about who I am, who I thought I was, what my socialization pushed me to be and who I really wanted to be.

Regardless, there was absolutely a connection between the dream ending and what happened with the yellow dog. I can feel it, but i can't say it.

Hopefully there is something more than soft foolish egotist mind wanderings in all of that.

Thanks for your comment.
Sometimes a gun is just a gun. I do not accept the freudian thing because this is about frustration and it ain't sex, or even veiled sexuality.

I've been in psychotherapy for 20 plus years and my cracker jack Doctor never once suggested it be so. Nor do i feel it to be.

In my dreams they throw me out of ROTC and i'm thinking that they can't do this (after all i am an 05)
My weapons always malfunction and the ammo is incorrect for what i'm carrying, and like you i keep my shit straight in the "real World".
I was not and am not incapable of making instant decisions when need be. I've never been indecisive when the chips are down.

I will write, at Lisa's urging about the RIF in 75 and it's affect on my life someday soon. If i ever get a handle on this it'll make a great study as i KNOW I'M NOT ALONE with this problem area.
When i need to use violence or to kill i use a technique that i call, blinking it off.

I simply blink and maintain my focus and after the blink i'm in a different place.

"i use a technique that i call, blinking it off"

I won't pretend to your experience or training, but, yes, that is what I meant by, "fixing my mind". I know what you're talking about. It's a cold motherfucker.

It's an ability, an awesome power you might say if you were to get carried away with it. Definitely serves a purpose in certain settings/situations, but maybe isn't right for the day to world?

Having felt it and used it, maybe there is a fear of losing it? At the same time maybe a fear of using it?

It seems "fixing your mind" and Ranger's "blinking it off" are the same thing ... a sort of steeling oneself to do the difficult thing.

I find your resolution following your dog experience fascinating. In that case, you did not want to kill, and someone else had asked you to (your mate). When the weapon failed (to your relief), it released you from a repellant task; the next morning the obligation was discharged in a better way.

To me, this was truly a healing for you. Perhaps you understood that you did not need to resist, and did not need to comply in a task which would have haunted you. In effect, the jammed gun released you from the imperative to function as an agent of death. It's quite powerful.

That Ranger continues to be haunted is also compelling. Perhaps he could release himself, but that might require enduring a vulnerability which would be unbearably, well, vulnerable. Gritting one's teeth and "blinking off" allows one to become an automaton-- perhaps a good and necessary skill in a dire situation, but not so functional when interaction is called for.

As you suggest, blinking isn't going to foster well-adjusted interactions in the day-to-day world. OTOH, if it's been one's security blanket when the going get's tough, it's a hard thing to open up, drop that satchel, and say "I'll take it in the chest everytime" in order to be able to really feel something.

Perhaps that's the question for Ranger and any of his fellows: "Is it preferable to remain comfortably numb in a safe limbo-land of flat affect," or does life demand the actual living of it?

Certainly many folks simply exist, and we each get to choose how technicolor our life will be. When Antie Mame says life's a buffet and most poor suckers are starving, it's good to remember that the buffet is set differently for each.

I hope that life can be more than an existence, but again, each chooses. In order to contribute we must step out of our safety circle of self-focus, IMHO.

You're a smart woman Lisa. Thanks.
avedis