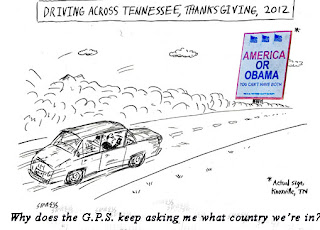 This socialism creep is not that weird little neo-Bolshevik at the cafe.  Instead, it is the reality of modern America which most Americans fail to grasp. The bumper sticker "No Socialism for America" on a local merchant's vehicle got Ranger thinking on the topic.


Strangely, we champion capitalism and democracy when even our banking system is based in socialism.  The United States socialized the debt of the errant banks in 2008 and underwrote the results of their ineptitude, greed and resultant financial shortfalls with U.S. taxpayer funds.  The U.S. socialized the debt while ensuring the privatization of the profits from the governmental bailouts.

Isn't the concept of Federalism actually socialist in basis? Doesn't the Federal government redistribute the wealth of the richer states to the poorer?  Doesn't Alabama, Mississippi, etc. benefit from this socialism?

If our citizens would stop to think for the time it takes to belch, maybe they would realize that socialism is the reality and the answer, rather than the problem. In addition, most of our major NATO allies are Socialist states; why are they allies if we are so opposed to their way of life?

When FOX news et. al. fashion socialism as the devil it keeps the plebes in line, keeps them feeling a faux solidarity against a chimerical enemy.  For example, the U.S. outspends twelve other industrial nations in healthcare, but our level of treatment is inferior.

Ours is a mangy Socialism: All of the calories, little of the nutrition.

posted by rangeragainstwar at 3:25 PM

The members of the political divide who scream about Kenyan Marxism or socialism don't understand what they are talking about. It's not they are stupid, it's that they've allowed liars to pollute their brains.

What the Toxic Conservative and Right-Wing think tanks promote is Corporatism and Neo-Feudalism.

They benefit by helping enforce the control of the Nation by the Plutocracy. And many are happy to fasten the chains of Corporate Bondage and Wage Slavery upon their own and their fellow Americans' necks.

Kick Alabama and Mississippi out of the Euro Zone, ooops I meant Dollar Zone.

I am getting sick and tired of half of my federal taxes going to subsidize their right wing fascism. Let them pay their fair share and stop getting $1.50 back on every $1 they send to Washington while my state only get back 50 cents on the dollar.

Secede hell, we should force them out. Snark!

"What the Toxic Conservative and Right-Wing think tanks promote is Corporatism and Neo-Feudalism."

Right, and somehow the Toxic Progressive and Left-wing in the US are all rainbow shitting unicorns & lollipops? Corporatism and Neo-Feudalism are hallmarks of both parties. Don't be a sanctimonious ass.

There is only one side pushing to steal social security, eliminate medicare and medicaid and crying about the evils of Marxism.

Gene and BRL,
You both are free to express you positions as long as we remain civil.
I'm nothing if not civil.
Gene,
I'm reading STATE OF DENIAL/WOODWARD 06 and i find it remarkable that in Rice's 1st meeting with Malaki she likened his job to that of FDR in 1932/33 which was to-you fill in the blanks.
Imagine her using a DEM Prez as her best example. I wonder why she didn't use Hoover as an example??
How's that for snarky?
jim
jim

Off topic, but just wondering if RAW is going to get in on the big Florida python hunt. $1,500 per snake!

Avedis,
The only python that i'm interested in is...
jim

Better keep that thing tucked away. With all he elmer fudd's taking to the bush, wouldn't want a hunting accident.