RANGER AGAINST WAR: Ethics for Dummies < 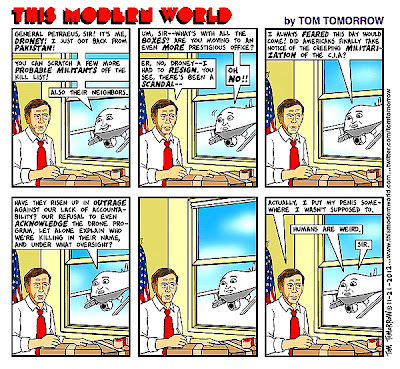 4.That branch of philosophy dealing with values
relating to human conduct, with respect to the
rightness and wrongness of certain actions
and to the goodness and badness
of the motives and ends of such actions
--Dictionary.com
__________________

Doing mop up after General Petraeus got busted last year for putting his John Thomas somewhere he oughtn't have (being the Good Calvinists that we, in the United States, are), Defense Secretary Leon Panetta called for an ethics training review by the Joint Chiefs of Staff for General Officers.

Doesn't it appear a teeny wienie bit too late to wait until a person reaches General Officer rank before they get ethics training?  I mean, once wee willie is out of the barn, what is the use in shutting the fly trap door?

It also seems somewhat hypocritical that a former Central Intelligence Agency Chief espouses this ethics review when his agency oversaw illegal renditions, secret prions and torture, none of which fall under the rubric "ethical". Further, why not ethics training for civilian Department of Defense appointees, to include their shill well-paid loyal attorneys?

Who cares about ethics today?  Who questioned the legality of elective and aggressive preemptive invasions, and the ethics of Long Wars?  What has happened to the people who have questioned the incarceration and detainment of people snatched up during these illegal, protracted aggressions? Hint:  They did not get the Presidential Medal of Freedom. 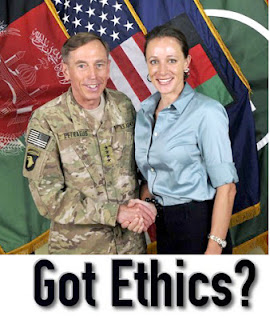 Marital infidelity ain't good, but it may pale next to transgressions of the murderous sort.  Message: No fuck whores, but fucking nations is o.k.  This belated consideration of ethics -- the latest installation of ass-covering as an art-form -- indicts our entire structure of education and military training, including our conception of liberal thought and what constitutes humanistic behavior.

We need more than a remediation course on ethics.