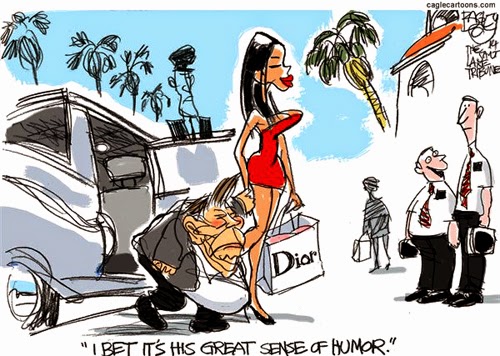 --Mr. Sterling and his "tranny",
according to a comment thread at the SI site

I'm shocked, aren't you? Mr. Sterling, the white basketball dude, said some negative things about black men and how this has a negative impact on how whites view the franchise, and now he's banned from going near a b-ball court again.

Well, at least that. Feeling better now -- how 'bout you? Or at least, I think I'm supposed to feel better. Naw, on second thought, I feel worse. We have freedom of speech in the United States, and what is protected is not just what you like. Incitement to violence is not protected, but expressing bigotry is not the former.

Among the roundup of talking heads on NPR's Diane Rehm show this morning was Michael Eric Dyson doing his predictable patter, about how the black man owns his negritude and transvalues the odious N-word into a symbol of his empowerment and re-habitation of his black body from the colonizing white man, who is not allowed to use the word.

Dyson is beside himself regarding the "entrenched racial biases that persist," but his outrage only extends to the bias that inhabits the headspace (or perhaps, the viscera) of the white man, which I suppose co-opts the person of the white female, too. {Forgive me, but I've had a particularly noxious exposure to Post-Structuralism which leaves me unable to brook too much of Professor Dyson's cant without feeling vaguely ill.}

Dyson will not allow himself to consider the prospect that blacks using the N-word is a self-loathing behavior. Can you imagine President Obama calling himself "one crazy nigga"? Me, either. By professor Dyson's metric, blacks may use the N-word, but if a black man like Bill Cosby (that old fuddy duddy) speaks of a problem in the black community, he is banished from the universe of cool.

And somehow, we are all o.k. with this, 'cos Jay Z. makes a lot of money throwing down his rap. And money makes you a Big Man in America.

Ms. Rehm then asked the panel if we might not draw some connection to the "Crazy Rancher Dude" (NYT's Gail Collin's term; and she has the temerity to talk about "freedom"?) who recently spoke in the NYT about black malaise in America. Not comme il faut, but he IS a rancher in Nevada, after all. Permit me to draw my own connections.

I've seen those people/families to which the rancher refers, sitting on the tattered sofas on their sagging front porch at 1100, perhaps someone drinking out of a paper bag. Lives without hope in my quaint, magnolia tree-lined city (on the off-streets, of course), in Cleveland, in D.C., in wherever. Do you think this is a problem? Me, too.

But laughing at "Crazy Rancher Dude" who's worked most of his 68 years is not an answer. It doesn't make me feel good. It makes me wonder how crazy are my fellows to even waste a moment missing the actual problem, which is the dismal lives of the people whom the rancher spoke of.

Ah, but fixing a problem takes effort and innovation. A Tweet is a mere 140 characters.

An older student, Joyce, once ask me a big question. (Joyce was really "Annie" on the student log, but she explained that "Annie" was a "black person's name", much I suppose as "Sarah" was the name appended to Jewish women in pre-war Nazi Germany.) Joyce asked after the murder of James Byrd, Jr., the black man who was dragged behind a truck in Texas, "Why do white people hate us, Miss Lisa?"

"Why do black people hate us, Joyce?", I asked. Hatred and exclusivity seems hardwired into our genome.

It will be a choice to stop, if we ever can.