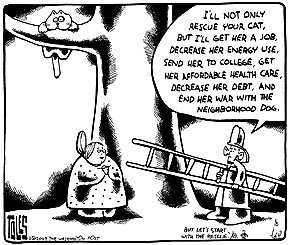 Let no guilty man escape
--U.S. Grant,
on the Whiskey Ring scandal of 1875,
in which he used the pardon to do just that

The commonly-held assumption is that this war is at a final stage -- "Six years after the U.S. invaded Iraq, the end of America's costly mission is in sight" (Iraq Improved but Problems Remain). But the Vietnam war had another phase after the U.S. bowed out of the fight.

The same will be true in Iraq, so we oughtn't to pull a "gee whiz, who'd a thunk it" when it happens.

In the final stage of the war, America's challenge will be to prevent ethnic and sectarian competition from exploding into violence on the scale that plunged the nation to the brink of all-out civil war two years ago.


If the U.S. really wanted to prevent ethnic and sectarian violence, we would not have invaded six years ago. Saddam had that problem under control. Oh U.S., you are so disingenuous.

The concept that the U.S. will honor the existing non-congressionally approved Status of Forces Agreement (SOFA) -- "U.S. combat troops are due to leave by September 2010, with all American soldiers gone by the end of the following year" -- is a dream at best; a lie, at worst.

The U.S. has no intention of disengaging. If we did our troops would be assing up and returning to their peacetime permanent stations. The troops remain on station because the Joint Chiefs want them to remain on station.

As Ranger's momma used to say: Mark my words!