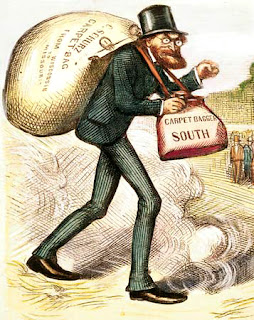 As specialists and bureaucrats, human beings become tools,
able to make systems of exploitation and even terror
function efficiently without the slightest sense
of personal responsibility or understanding.
They retreat into the arcane language
of all specialists, to mask what they are doing
and give to their work a sanitized, clinical veneer.
--Our Mania for Hope is a Curse, Chris Hedges

The time will come
When you'll be blue
Your cheatin' heart
Will tell on you
--Your Cheatin Heart,
Hank Williams

Florida is more than the state that brought you Tourist Season, Mickey Mouse and oranges -- it is also the United States' fourth largest cow -calf producing state, so it is with flourish that we mention one of the most lily-livered crimes in our nation's history: the cattle rustle.

In the Old West the branding iron was carried by cattle and horse thieves to alter the brands when rustling livestock. Rustling is a crime, and often, a hanging one. But such will not be the fate of our two Presidential frontrunners, JEB! and Hillary, who have taken the hot iron and re-branded themselves with abandon.

Hillary entered the world as an "XXY", but she has re-branded herself the Double Bar, "XX". Or, for those with a scientific bent, she is now a Double Barr. [RAW considered whether this was too crass, but decided it passed muster. This is not a crumpet-and-clotted cream site, after all.]

Hill presents today as the True Blue wife, mother and grandmother, a veritable Granny Weatherall. Someone who dines at Waffle House and shops at Costco. But who is she, really?

She is a social climber who affixed herself to the bumbling Arkansas boy - Rhodes scholar, Bill Clinton. Her milieu is Old School feminism, lesbians, old hippies, and the plethora of women who have been cheated on or otherwise hard-done-by their mates. On her campaign stops, she is often seen dressing dowdily, like Rosalynn Carter, to appeal to the COSTCO crowd.

During her tenure as Secretary of State she is probably responsible for a multitude of sins, both omitted and committed. Maybe she learned this from Bill, maybe the propensity to untruth is vice versa; perhaps, connubial.

In any event, she has neither the panache nor the aplomb to commit venality with a smile, unlike Bill. Her BRF is as perennially committed as those of Condi Rice or Michele Obama.

Hillary is the Ur-feminist who once told an interviewer that she would not "stand by her man" (if he were proved cheating.) Alas, like all good politicians, she made a deal with the devil and gutted it out. She did stand by her man, and has proceeded  to use him as a stepping stone to the highest office in the land.

BUT, she is a piker up against JEB. As Florida's Governror, JEB stole an entire election for his brother in a grand national tragedy on the par with the best Greek tragedy.

In 2000, Just like the Earps or Clantons in the West of yore, brothers JEB and W marched up to the OK Corral -- the Capital in Tallahassee, FL -- and gunned Democracy into the filthy ground of partisan politics

The Supreme Court stayed the recount of votes in Florida in 2000 (stopped by then Florida Secretary of State Katherine Harris, heiress to a Florida cattle fortune co-chair of George W. Bush's campaign in Florida), which gave the election to Bush. Harris certified GWB as the winner by 537 votes over his Democratic rival, Vice President Al Gore in a highly questionable election resulting from poorly constructed ballots.

Never once did Governor JEB consider any course of action beyond ensuring his brother's theft of Florida's electoral votes in 2000. He never said, "This is an issue of State's rights and the Florida legislature and law, and when contention arises, the U.S. legislative branch should properly address the issue." He failed to support the law of the land.

Supreme Court Justice Stevens wrote in his dissent in the case,

"Time will one day heal the wound to that confidence that will be inflicted by today's decision. One thing, however, is certain. Although we may never know with complete certainty the identity of the winner of this year's Presidential election, the identity of the loser is perfectly clear. It is the Nation's confidence in the judge as an impartial guardian of the rule of law."

Start with his simple campaign logo: JEB! Many Southern homes feature a photo of J.E.B. Stuart, a Confederate general in the U.S. Civil War [or "War of Northern Aggression" as it is known 'round these parts.] JEB simply HAS to be a good old boy.

Say it, feel the way it sticks to the roof of your mouth, like divinity on a sweltering humid day. It sounds like "JED", patriarch of t.v.'s Clampett family ("The Beverly Hillbillies"), which derives from the biblical, Jedidiah. So there you have it. An unholy trinity.

JEB is as profligate a character as was his brother, former President GWB -- the man who single-handedly birthed the Clash of Civilizations we have been exposed to daily in the news (in between stories of Jared the Subway huckster and Ms. Jenner.) JEB has the added political bonus of being as sneaky as his father, former President and former head of the Central Intelligence Agency GHW Bush.

There's more, of course. JEB later worked for a New York banking firm which screwed Florida's teachers and other State employees through mismanagement of their retirement investments.

But that's another Florida story.  One more in a time-honored miasma of skulduggery and venality which, like so much other muck, sinks to the bottom of a gator hole, never to be seen again. 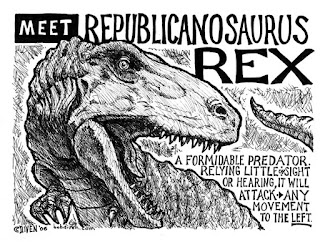 The transition from democracy to tyranny
is most easily brought about by a popular leader
who knows how to exploit the class antagonism
between the rich and the poor
within the democratic state,
and who succeeds in building up a bodyguard
of a private army of his own.
The people who have hailed him first
as the champion of freedom are soon enslaved
--Plato

After such knowledge, what forgiveness?
--Gerontion, T. S. Eliot

Rifles have either a left or a right rifling, and oddly, most are right twist. This may be a linguistic legacy from Latin which affiliates "evil" with being leftward turning. (As an aside, this is why children especially in parochial schools used to be trained not to be a "lefty".)

This affinity for twist can be seen throughout quantum world, as well. Subatomic particles each have a signature spin. In a most curious analogy to modern man from contemporary physics witness the Majorana fermion, a particle so conflicted that it spins both right and left, ultimately self-destructing. They are their own antiparticles. Madness, no?

But unlike those ruminants among us who are Left-leaning, the Right seems to suffer no qualms about the rightness of its mission, even in the face of its abject and patent absurdity vis-a-vis modernity. We in Florida suffer a surfeit of absurdity in the Presidential candidates which our state fronts.

Florida, the land of underwater mermaids, Marco Rubio and Elian Gonzales, the land which brought the "Latino" out of Hispanic. JEB!, nee "Bush", follows Rubio's lead. [Learning Spanish was the best thing this profligate young Bush scion ever did.] Florida delivers as it ever does on bringing the nation full-on oddities in the name of JEB! and Rubio.

Per the failure of today's Right-thinking: Elections are about the future, yet the field of Republican candidates is staunchly reactionary. Why is that? Because the people of the Republican Party feel themselves to be hard-done-by, and their media stations of choice pummel them with that idea daily.


What are they angry at? What do you got?


They are whipped into a lather by the likes of FOX news and Rush Limbaugh, and the one emotion they have is aggression. Aggression against anyone who does not look or think like they do. They feel this way because they take the prosperous post-Cold War years to be the set-point of how the United States ought to be. But it is not.

They feel that Someone Else is taking the jobs that are rightly theirs, and their ire is directed at any number of indigenous threats to their imagined lost glory. We heard in a store recently a stout woman proclaim, with feeling, "Damn if they'll take my Confederate flag from me."

Echoes of Charlton Heston's "cold, dead hands" speech at a past Republican convention, a pathetic cri-de-cour from a woman not operating at the upper echelons of her nation, yet fully subservient to them, all the while thinking herself to be a player in her world.

She and her cohort know only "No -- you can' take that from me." It is the plaintive cry of the five-year-old who doesn't want to share his toys, yet does not notice that the other kids have niftier toys, anyway.


Lady-- your tattered flag is the least of your beloved nation's concerns.


The mentality is so Hatfield and McCoy. We do it well, and the politicos set us up for it every time.

The problem is, the U.S. no longer controls 50% of the world's manufacturing, and the country is beginning to resemble the America of the turn of the 20th century. We can no longer be the World's Policeman. We never should have been, and that power mindset is a folly which is leading our country to deficit madness.

Both Bush and Rubio exhibit a Cold War mindset of anti-Communism that keeps us pathetically entrenched in an idea which has long passed on. The Domino Theory is dead.

Yet the Cubans in Florida are devoutly anti-Commmunist, and their thinking is front and center in American Right thought. What's on the nightly news? Watch Mother Russia make its power grab in the Crimea and the Georgia province of South Ossetia. But please don't look at China over there, our Most Excellent Favored Trading partner.

posted by rangeragainstwar at 8:15 PM 3 comments