A Pocketful of Mumbles 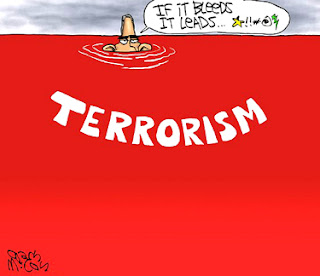 I have squandered my resistance
For a pocketful of mumbles,
Such are promises
All lies and jest
Still, a man hears what he wants to hear
And disregards the rest
--The Boxer,
Simon and Garfunkel

See, in my line of work you
got to keep repeating things over and over
and over again for the truth to sink in,
to kind of catapult the propaganda
--President George W. Bush

The OCT 2015 -  JAN 2016 Army Echoes, the quarterly newsletter sent to over a million retired soldiers and families, has set for itself the modest proposal of keeping its readers in thrall to Them Terrorists, 24/7 ("Sustaining Antiterrorism awareness -- always ready, always alert," p.5.) Just in case you fail to subject yourself to the ample media sources which should have already brought you to this paralyzed state.

Ranger will deconstruct the money graph, to wit:

"Terrorists can attack anywhere, anytime – the threat is real. Over the recent months the continued threats on social media from the Islamic State of Iraq and The Levant (ISIL; also commonly referred to as ISIS) and their influence on domestic extremists demonstrates the lengths that terrorist groups take to threaten our nation and our military communities. ISIL has also expanded their tactics to include cyber-attacks and attempts to exploit private and sensitive information of our military personnel and their families. These risks pertain directly to Retired Soldiers, just as they do the entire Army community."

Is that true? Can you think of somewhere they could not? How about a nuclear (surety) weapons storage area, the protection of which is the job of the Army, after all. So, no -- not anywhere; check one.

Next: "(T)he continued threats on social media from the Islamic State of Iraq and The Levant (ISIL; also commonly referred to as ISIS) . . . demonstrates the lengths that terrorist groups take to threaten our nation and our military communities." OK -- "social media threats" -- certainly is not a nice thing to do. We call such people "trolls", and what they do is BULLYING. When they act on their threats, they become criminals.

Bullying certainly has its own corrosive quality, but do WE need to be "always ready, always alert"? Maybe we could just farm out that set of feelings over to the people paid to monitor such transmissions on a daily basis. That IS what they are paid for, after all, and it would cut down on our psychotherapy bills and Unisom consumption, something that would be good for an overworked, over-stressed population, no?

Aren't Terrorists a Level One threat? If they are out "to exploit private and sensitive information of our military personnel and their families," and "(T)hese risks pertain directly to Retired Soldiers, just as they do the entire Army community," tell us what these tactics entail so that we might be proactive about it. Instead we are fed a vague miasma of fear, riding on the tails of the aura created around terror groups.

Further: the piece is predicated on a falsehood: ISIL is not a terror organization. IS has a military chain of command, their members wear uniforms, carry weapons and attack military targets. They do not conform to the international laws of war.

The last fact does not render them terrorists, but rather War Criminals. Possibly they could be convicted under "crimes against humanity", but the evidence favors war criminal prosecution. A paragraph full of lies and half-truths, courtesy your U.S. Army.

You can sleep well, tonight, despite the fact that rough men stand ready to scare you witless.

posted by rangeragainstwar at 12:12 PM 2 comments 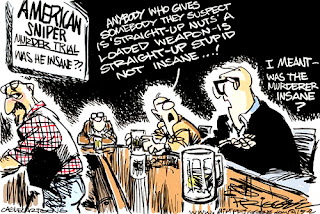 Follow me;
and let the dead bury their dead
--Matthew 8:22

Holding back the years
Thinking of the fear I've had so long,
When somebody hears
Listen to the fear that's gone
--Holding Back the Years ,
Simply Red

A couple of weeks ago we attended the Black Hat Instructors reunion in Columbus, Ga, home of the Infantry School and Ranger's former stomping grounds. Present past and future collided.

The young soldiers have a startled-deer gaze in their eyes; that is the present. The film American Sniper played on t.v. that night, and we watched it for the first time; this depicted a version of the present. Lord help us if military service has devolved into the triteness displayed in the film. (We knew that Hollywood was already there because it sells to an audience that rejects challenge.)

As an Army-trained sniper, Ranger understands the reality of military killing. "American Sniper" made a harsh reality into a comic book-style graphic novel, laden with melodrama. The eponymous sniper was mad and mean, and shown as determined to deliver his holy vengeance upon the enemy.

Four young men were in the next motel room, and would begin Ranger training the following morning; this is the future. That day was the reunion, and thus, the past. "American Sniper" was the recent past, flowing into the future.

We are all slowly marching into the past, despite our current roles and their iterations, despite our perception of the speed of that movement. Rather than talk Old Soldier stuff, our thoughts go to humanity and military service writ large.

Ranger has known many hard, tough men, starting with those of his youth in the coal towns of Southeastern Pennsylvania. He has also known many mean men, and some mean and tough men.

As a company commander he endeavored to run a company devoid of mean-spirited leadership, focused instead on the hardness of our service. Life and service is not as depicted in the thin reality of these melodramatic films. Unlike the sentiments expressed by the sniper character Chris Kyle, meanness has no place in the military or in life.

Disappointingly, this movie, like so many others of its ilk, imparts a mean-spiritedness to American actions, as though that meanness is a natural response to being attacked, and as though that response will save us.

We hope that the young men going off to Ranger training on that day are trained to be tough, without the need to be mean. The years will be mean enough without our actions adding to the burden.

Forty-seven years from now, we wonder how they will remember those that have fallen by the wayside. With equanimity?

We hope it will not be through a callow mean lens like that through which most tough guys are depicted for us today.

posted by rangeragainstwar at 8:00 PM 4 comments 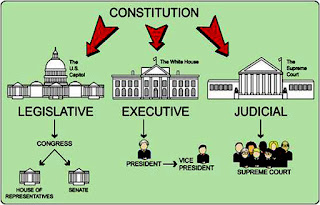 You can kill a man,
but you can't detsroy an idea
--Medgar Evans

Load up on guns, bring your friends
It's fun to lose and to pretend
--Smells Like Teen Spirit,
Nirvana

The Big Stick talk on the United States' Executive, State and Department of Defense street is about destroying Islamic State (IS) / ISIL / ISIS/ Daesh, forever and ever, amen. President Obama has stated this objective clearly on the White House web page ("We will degrade, and ultimately destroy, ISIL.")

But this idea should be examined in a realistic manner, devoid of the feminine dithering of our leaders.

Fact: the destruction of IS is not going to happen anytime soon. Following 12+ years of hostilities , Al Qaeda (the original Bad Boys on the block) has not been destroyed, so what makes us think IS can be destroyed? The best that we have achieved with Al Qaeda is to have killed numbers one through three in their hierarchy; wash - rinse - repeat.

However, these attempts to disorder the group did not destroy the organization. It seems they have the military idea of "slotting" down better than we could imagine. We can kill people with explosives, but we cannot destroy their ideas as handily.

The Islamic State is not the problem in the ME. IS did not destabilize the region. IS simply exploited the now existing power vacuums. IS is not an aberration but rather the apotheosis of a prevailing Middle Easernt mindset. This is why their iteration has been so successful.

Through our efforts at destabilization, we handed the thugs a present. The force that animates and populates IS was already there, simmering and roiling beneath the surface. We simply unleashed it.

To focus on the destruction of IS would simply be to remove a symptom, not to address the disease.

News flash: The United States military forces have never destroyed an enemy army. We may have defeated them, but the vanquished forces may live to fight another day, or to morph into something new and try again.

Moreover, calling for the destruction of any entity is philosophically as barbaric as the destructive actions of IS. If destruction is the best the U.S. can conjure as a realistic course of action, then we have lost the finesse that makes democracy unique among governmental systems.

How does destroying an entire army (IS) express the values of a civilized Western  military tradition? Are we deserting our laws of land warfare and reverting to Old Testament standards of conduct?

posted by rangeragainstwar at 10:54 AM 2 comments 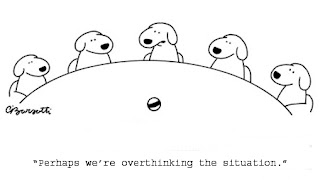 The problem with leaderless uprisings taking over
is that you don't always know what you get
at the other end.
If you are not careful you could
replace a bad government with one much worse!

Sometimes it s necessary to step back from a problem and to evaluate what is actually happening, rather than reacting to what you think is happening. This is doubly important when the assumptions diverge from observable reality. In order to reify our behavior we need to look clearly and interpret the flow of events, from origin (cause and effect) to the present.

As we walk down the lane in the Middle East, it is clear that the center is not holding. It is not even clear if there is a center. The situation is reminiscent of the acrobatic plate spinners of yore: each hand spins the plate around his own center, and there a lot of plates spinning in the air at the same time. Eventually, the motion of all will stop.

The quagmire in the Middle East as we are told will be solved when a power-sharing accord can be reached, but this concept is easier said than done. Terrorism is the bee in the bonnet, but this it is far from exclusively a Mid-East tactic. Let us look at the recent flame-up of the revanchist sentiment in Ireland.

While they have their moments of detente, the internecine violence British in Northern Ireland and Irish Republican Army has resurged recently; the1998 Good Friday Agreement did not hold.

These entities have not achieved a lasting truce in Northern Ireland because the quiet times are actually consolidation and reorganization periods, time to retrain and establish networks. In light of this ongoing and intractable conflict, what are the implications for the Middle East?

If two Christian entities cannot peaceably  resolve their differences, then how much less likely is it for the Sunnis  and Shiites to do so? The Northern Ireland conflict between two civilized societies (Ireland is often seen as the savior of civilization for its monastic academic efforts in the Dark Ages) is centuries old, reaching back to the Battle of the Boyne in 1690. The end game is elusive.

Ranger Simple Question of the Day:

Why think that the Islamists can achieve a peace that still eludes Christian players?

posted by rangeragainstwar at 11:38 AM 2 comments