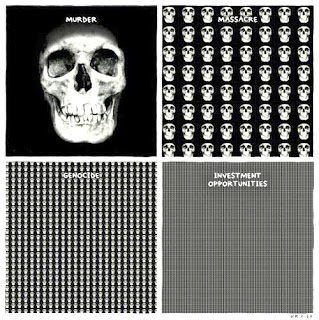 It is reported this month that the cost of the Phony War on Terror (PWOT ©) is approaching $4 trillion. It is a number hard to conceptualize. Few federal programs are funded to this figure (over a 12-year span).

Moreover, we do not know what we are buying, or for or from whom. The expense is buried in secret budgets, state and local costs and the expenditures of the Departments of Defense and State. We cannot evaluate either the intent or capabilities of the terrorists, yet we throw mega dollars at the concept.

The benchmark of a viable project is that it defines the problem and the subject (population), and from this it formulates an approach. We have fallen short in the PWOT.

Now fast-forward to 2015: Can we say with any certainty that the lavish expenditures of the PWOT minimized future attacks on the homeland?

It was Ranger’s position following the attacks that there would be no follow-on scenarios because the group lacked the capabilities to do so. The opposing camp says that it was the ensuing expensive military campaign which has thwarted any such potential events. In making a judgment, it is important to consider the quality of the piddling, pathetic efforts made by the sad sack terrorists manqué here at home, i.e., Jose Padilla, Richard Reid (the “shoe bomber”); Umar Farouk Abdulmutallab (the "underwear bomber"), the Ohio bridge bombers, et al.

We need an Affordable Terrorism Act (ATA). But to agree to such a thing, we would have to believe in ourselves and in an observable world order.

We would have to accept that:

If we accepted these things, Ranger’s suggestions would include:

We cannot afford an open-ended war of such extravagant spending when our social welfare system struggles to provide services to needy Americans. We can ill-afford this ongoing distraction.


When 40 million Americans got to bed hungry each night it seems superfluous to say terrorism is a threat to our way of life.

posted by rangeragainstwar at 12:14 PM 0 comments 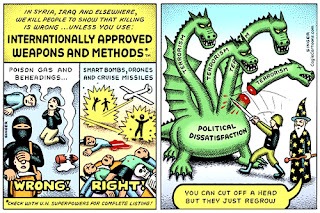 I can't believe we're just gonna casually
watch someone get murdered.
What is this, Detroit?
--The Final Girls (2015)


The media are calling the recent Paris attacks an act of war. French President Hollande says the nation's response will be "pitiless".

Unfortunately, these killings were simply another primitive terror incident carried out by non-state players, with simple explosives and individual weapons. It was a terror attack because the perpetrators did not have more sophisticated assets. If they did they would have used them.

Terror is the tool of the weak in a world of militarily powerful nation states.

Terrorism is not warfare. It is criminal activity. If it were warfare, then the players would be covered as legitimate combatants under the Geneva Conventions; they are not. They are consistently misrepresented as "militia" along with all the other related emotion-laden appellations.

Yet the fact remains: they are simple criminals unworthy of the title "combatant". Terrorism is not warfare, nor is warfare, terrorism. Just because we call terrorism "an act of war" does not make it so. We are not Captain Jean-Luc Picard.

posted by rangeragainstwar at 10:22 AM 1 comments 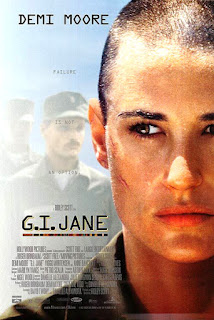 I'm strictly a female female
And my future I hope will be
In the home of a brave and free male
Who'll enjoy being a guy
having a girl...like... me
--I Enjoy Being a Girl,
Flower Drum Song

I feel dizzy
I feel sunny
I feel fizzy and funny and fine
And so pretty
Miss America can just resign
--I Feel Pretty,
West Side Story

When we were kids, "Your mother wears Army boots" was about the worst insult we could muster.  Now, it's just another day in the office for female military members.

In the march to equality (androgyny?), this year saw the first three female graduates from Ranger school. Ranger agrees with those who feel that the admission of females will lower the standards of Infantry combat training as well as the effectiveness of combat units But he also believes Ranger training was being degraded long before women entered the school.

Ranger's Ranger experience (referred to henceforth as "RR") was a far cry from today's climate-controlled living experience. Barracks were uninsulated and unheated in the depth of winter; windows were nailed open.

Ranger School had no niceties. RR's candidates were allowed five minutes in the mess hall, so a meal consisted mainly of  what you could stuff in your field jacket pockets, like Hoffman's grubby "Ratso Rizzo" in Midnight Cowboy. That is probably not the case today, as the candidates all looked clean and rested when Ranger had an opportunity to view the camp several years ago. The men from RR's looked like extreme reality show escapees.

They traveled to Mountain Ranger Camp (MRC) in 2 1/2 ton truck with canvas top, freezing in the wind chill of a North Georgia winter. They lived in primitive huts. The showers were cold, and there was a central latrine. They seldom slept more than four hours, and usually that was in the field with only a sleeping bag cover allowed. Rations were C-type.

Compare Ranger school's 2015 three-hour, 12-mile forced march component (the same standard that a non-elite group like female MP basic trainees had to meet 30 years ago) to RR's 19-mile forced march off 1968 with rucksacks and all normally carried TO&E equipment.

The forced march requirement now is only 60% of the 1968 standard. (Note: RR's 1968 training was a degradation still from that of basic line unit training in WWII, when the 2/506/101 performed a 56-mile forced march from Toccoa, GA to Atlanta.) RR's required five-mile run and all p.t. was done in 2-lb boots, not sneakers. His medics gave the men Darvon 600's so they could numb themselves during the day.

Why the degradation in training? Is it because today's All Volunteer Army does not need to be as tough?

The female Ranger graduates were recycled more than once (having not passed previous classes.) Though recycling was not uncommon in Ranger's experience, only one attempt at recycling was allowed, and it was never at Camp Darby, the patrolling component (as it was with these females)

Why did they all the women fail at Darby? When RR's arrived they were branch-qualified and knew patrolling and how to use all TO&E equipment and weaponry. Darby was simply a polishing endeavor. There were no recycles at Darby because it was too early to identify the need for remediation.

Ranger school training has been degraded, and now women (with a little help from their friends) will be passing through. And though they will be assigned to units, it is doubtful that will ever be used as combat multipliers in actual Infantry combat scenarios.

These female Ranger's were raised with tough and buff movie characters like Lara Croft and G.I. Jane. Our all-inclusive society is allowing them to realize their dreams, but at what cost will this EOE effort come?

posted by rangeragainstwar at 10:10 PM 5 comments

Burning Down the House 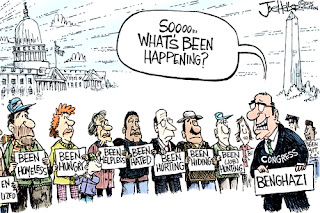 All I want is to be left alone
in my average home;
But why do I always feel
like I'm in the Twilight Zone?
--Somebody's Watching Me,
Rockwell

The United States Embassy in Benghazi, Libya, was destroyed on 11 September 2012. U.S. Ambassador J. Christopher Stevens and three other were killed in the attack. The alleged leader of the attack, Ahmed Abu Khatalluh, was captured by a squad of U.S. commmados, law enforcement and intelligence agents on 17 June 2014.

Khatalluh was taken to an undisclosed location, and then-Attorney General Eric Holder assured us that the prisoner would be tried in federal court. November 5 -- 16 months hence -- and no trial has come of this capture.

So what is happening at the highest levels of U.S. Justice to bring Khatalluh to the open courts of the U.S. federal justice system, as we have been promised? On 3 August 2015, the Associated Press reported that Khatallah's defense team petitioned the court to have the case dismissed; no further motions on the case have been reported.

The U.S. spends billions of dollars on intel and covert operations, going halfway 'round the world to capture those deemed to be terrorists, and then what happens? One thing we do no do is to bring them to justice.

If Khatalluh is responsible for these U.S. deaths, then bring him to trial, as required by law. Why do we not have the satisfaction of seeing high level threats like Katalluh neutralized in transparent federal court trials? Why is everything a secret?

Murder is a capital offense. Do we no longer believe in the efficacy of the federal court system to mete out justice after a crime has been committed?

posted by rangeragainstwar at 3:00 PM 3 comments 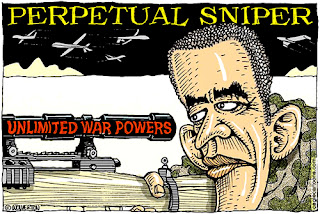 War criminals and terrorists are different creatures and the terms are not interchangeable. So why has everything that obstructs United State's foreign ventures been labelled, "terrorism"?

Surely the Army's  Chief of Staff, the senior Army adviser to the President, should have a firm handle on this topic, yet he goes along to get along with the collective, simplistic delusion. The taxpayers do not know to ask for clarification.

Islamic State presents more than meets the eye. They are fighting Syrian, Iraqi, Iranian and Kurdish forces on the ground, to include the militias arrayed against them. They are enduring U.S. air strikes. This is not what terrorists do.

Simply, their organization has evolved along the spectrum of conflict. Maoist theory predicts this morphology beginning with a group's small actions all the way to Army status.

As we waffle on the topic of confronting IS, what we never do confront is the simple question:

"What would we do, as the forces of freedom and democracy, IF we should defeat or capture the entire force structure of IS? Is there an answer? Why do we continue to partake in a losing scenario? Does the U.S. taxpayer benefit from any warfare with IS?

The answer does not lie in fighting IS, but determining that for which we fight.

IS has clearly defined its goals and priorities; it is time that the U.S. does the same.

posted by rangeragainstwar at 10:00 PM 1 comments