Americans love to drill holes
in other people's countries
--Syriana (2005)

In Clausewitzian thought, war is considered an extension of the political process. War is deadly politics.

Here we are in 2016 and this 19th century thinking is still taught in our military schools and guides our geopolitical behavior. But post-Phony War on Terror (PWOT ©), Arab Spring and the lot of it, the dichotomy no longer seems so relevant.

Using Syria as an example: There is no political goal that can be applied to the military endeavor, and vice versa. The military effort will not sustain a politically successful conclusion for any of the players. Politics and military violence are not mutually supportive, nor is one an extension of the other.

For the United States there is no political solution that will be won by force of arms. There is also no military treatment that will effect a political decision. If we accept this, then the solution to the Syrian Civil War is outside of the rules of war and of politics.

If the U.S. uses military power we can destroy the current iteration of the Islamic State (IS), but that will not end the civil war. Neither Iran, Iraq, the U.S. nor the Russians will allow such a thing. Additionally, IS will be re-born under another sobriquet.

The political entente cannot be achieved because none of the players – including the U.S. – can impose its political will short of a decisive war. The problem is that the U.S. Department of State (DoS) cannot achieve a political consensus, and the CIA cannot achieve a military success.

Possibly, I have this reversed, and the DoS cannot achieve a military victory and the CIA does not have a political solution of any value. The CIA and the DoS have contradictory goals, and their efforts are cancelling one another out. Why did the U.S. support rebels when this war started? Lose/lose is a far piece from win/win.

Neither politics nor military action have produced any results in Libya, Syria or Iraq. Iran remains the wild card sitting in the catbird’s seat. Saudi Arabia is also outside of the military – political sphere of influence.

So, why did the U.S. get enmeshed in the Syrian Civil War to begin with? What will the U.S. gain by throwing its lot in with the rebels – any of them?

posted by rangeragainstwar at 2:48 PM 2 comments 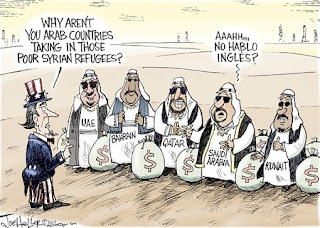 I'd like to build the world a home
And furnish it with love
Grow apple trees and honey bees
And snow white turtle doves
--Coke commercial, The New Seekers

President Obama recently forcefully rebuked the rise of "inexplicable political rhetoric" against Muslims, decrying the fact that the entire Muslim community was being blamed for the violent acts of a very few. Strange days indeed, as this was spoken by a president who has killed Muslims worldwide, both observant and secular.

Besides being hypocritical it is disingenuous, for the violence perpetrated by Muslims who have recently invaded Europe makes the anti- Muslim rhetoric very explicable. Saying the reaction to Muslims is "inexplicable" does not make it so, even if it perpetuates the finely-honed image of inclusion and liberalism which we have embraced as an American self-definition.

One thing is certain: devout Muslims do not share Western Enlightenment values. Muslims are homophobic and misogynistic (which is not to say that die-hard Christians are not, but to a lesser degree and in a less public castigation), among many other beliefs they hold which do not jibe with Western protocol.

Especially dissonant at the President's talk was the presence of women in hijabs and burkas gazing agog at this president, Lewinsky-like, while he argued for the inclusivity of Muslims into Western society.  Meanwhile their bodies were hidden beneath bag-like 13th century garb. How can these women pursue happiness and the American dream when their very exclusion violates the separate-but-equal clause of the U.S. Constitution?

Is importing such reactionary foreign behaviors into America really wise? Is not the United State's the great "melting pot", into which all newcomers throw themselves in order that they might emerge from that cauldron tempered and defined as a new entity, that of the "U.S.citizen"? The modern U.S. ideal is rational thought which promotes individualism, freedom of religion, and all associated freedoms, rights and responsibilities.

While no American can deny the use of controlled immigration as a national tool, should we allow immigration of peoples en masse whom opposes the very values of our national life. Creating Enlightenment values was a hard road to hoe, but it is precious and should be defended against those who would revel in its dissolution.

Islam is not the problem, because they are very clear. No, the problem is that we Judeo-Christian types extend charitable thoughts and actions to those who neither deserve nor want this largess. U.S. charity and immigration policy should address the welfare of our nation and apply only to those willing to integrate into our value system.

The U.S. government is clamping down on social benefits across the board for our own citizens, yet we espouse bringing people in to the country who can't say with a straight face that they want be Americans.

And we say with a straight face that they will enrich our nation.

posted by rangeragainstwar at 11:03 AM 5 comments