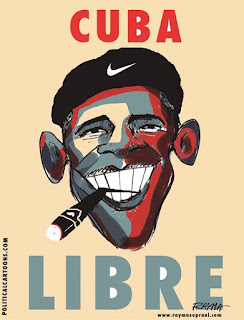 --Except if you are in Gitmo

“Who are you? Just another American
who saw too many movies as a child?
Another orphan of a bankrupt culture
who thinks he’s John Wayne?
--Die Hard (1988)

People react to fear, not love.
They don't teach that in
Sunday school, but it's true
--Richard Nixon

President Obama visited Cuba this week like a shining white knight, a la President Reagan vis-a-vis Gorbachev. "I have come here to bury the last remnant of the Cold War in the Americas," he said.

In his not quite so soaring rhetoric, Mr. Obama pledged to take down the wall that has separated the two nations for 50 years, proclaiming that is what a democracy does -- it engages in free and open debate. For a little extra oomph, he threw in some Kennedy spit polish, suggesting the universality of man in an "Ich ein Berliner" rip (he chose José Martí's, “Cultivo una rosa blanca”).

What he failed to do was to address the rights of the men that the United States continues to detain in Guantanamo Bay 14 years into a misbegotten war, a prison joint that the President had vowed to close several years ago.

The New York Times ran a laughably disingenuous editorial on the visit, to wit:

" . . .they saw a cantankerous autocrat who failed to [answer] a journalist [who] asked why his government continues to detain people for their political beliefs."


Were they talking about Mr. Obama or Mr.Castro? Hard to tell. Obama is preaching democracy while practicing totalitarianism. Like all good preachers, you tell the flock what makes them feel good.

The problem of Gitmo seems intractable. The hard core faction wants to bring the prisoners to the U.S. and throw them into Supermax. They face a problem, though: before we throw prisoners into  jail and throw away the key, we must conduct a nicety called a "trial". The individuals must then be convicted.

Instead, the Gitmo detainees have been rendered a stateless people in a pre-Magna Carta state, beyond the reach of legality. Some have been released with no trial, others remain in a prison limboland.

Since they are denied Prisoner of War status -- which would afford them certain protections -- they must be convicted or released.

posted by rangeragainstwar at 1:40 PM 1 comments

In the Name of the Rose

I say father, and you say pater,
I saw mother and you say mater
--Let's Call the Whole Thing Off,
George Gershwin

A rose by any other name
would smell as sweet
--Romeo and Juliet, Shakespeare

Terrorism is like a tiger that changes it's stripes, and everyone is grasping for its tail, but he eludes capture. Like a game of musical chairs, each government agency must find a chair at the money feeding trough, and so must make a case that terrorism is something they can best confront.

Although terrorism is an observable fact, the way we interpret the facts leads to different theories regarding how to confront it.

Many agencies share the task of defining and confronting terrorism, and so each must define it slightly differently in order to justify their viability qua agency. When the failed War on Terror began, the FBI had proponency under their counterintelligence functions. Terrorism was a legal concern under United States code and practices. Terrorists are civilians, and criminal law covers their actions.

Then there is the CIA, a civilian intelligence agency which has a paramilitary branch. Therefore, it is to their benefit to mold the subject into a military plus civilian concern.

Next is the Department of State, which can trump the CIA because they can get the Department of Defense  (DoD) to do their bidding. The DoD speaks of bringing freedom and liberty to countries, while breaking and destroying the same countries. But the DoD also has some intelligence agencies at the strategic level, so why not employ them for terrorism counteraction?

It behooves certain agencies to define the symbolic violence of terrorism as "warfare" for funding purposes. But the criminals acts of 9-11-01 were different in scope and nature than the activities of ISIS, which are warfare. Further, as ISIS does not abide by the accepted rules of war this confounds the issue, making them look like terrorists.

The problem facing us is to define terrorism and decide the correct approach to confronting it. Each agency is disingenuousness in the name of defending their corner of the pie.

The DoD has the Defense Intelligence Agency (DIA) and the National Security Agency (NSA) and use them they must, even when there is no foreign government to target in their collection cycle. In such a pickle, they can also turn their alphabet monitoring apparatuses on U.S. citizens and sell that function as a security concern. DoD will target anything in their need to find a niche in the Phony War on Terror (PWOT ©).

So, the DoD, Department of State, HSA, CIA, Special Operation, the President, the Attorney General and the Pope all have conflicting theories on what the term "terrorism" actually means.

After 14 years of war we still cannot define the problem because it remains theoretical.

posted by rangeragainstwar at 11:53 AM 2 comments 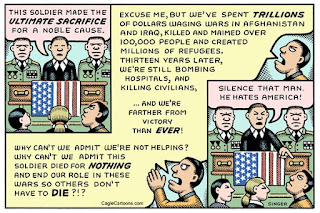 --Died for Nothing,
Andy Singer

I heard the news today, oh, boy,
The English army had just won the war
--A Day in the Life, The Beatles

Come on, baby
Jump up
Jump back
Well, now, I think you've got the knack
--LocoMotion, Little Eva

The Big News a few days ago was that United States Delta troops had captured an ISIS chemical weapons expert who specialized in the manufacture and use of mustard gas, a "Chemical Ali" for our times.

Yet despite the Good News of Good Guys triumphing over Evil, here we are 14 years into the Middle East war project and not one millimeter closer to an endgame. The capture and killing of an individual is meaningless effort, signifying motion with no progress.

But Perhaps Good News is relative -- what is good for the talking heads and Hollywood filmmakers and contractors is not good for us taxpayers in the homeland.

As RangerAgainstWar has said from the inception of the Phony War on Terror (PWOT ©): there is nothing for the U.S. to win, and all is effort with no benefit. Our soldiers are not fighting for our freedom (though they may be fighting for the freedom of the war profiteers to profit.)

Iraq and Iran will never be bastions of liberal democracy; meanwhile, freedoms in the U.S. wane daily. So what is the soldier's mission?

We were sold The Surge and The (fill-in-the-blank) Spring as worthy soldierly goals. Yet historically, surges and springs come to no good end. Stalingrad, Kursk, the German efforts at The Bulge, the Prague Spring. Sounds good, but they had no staying power.

The Surge was a media event, the Sunni Awakening and the Sons of Iraq being bribed to pretend to fight for U.S. goals when in reality it was Sunni fighters consolidating and reorganizing for their next effort . . . with the help of U.S. weapons and training. Add a spoonful of sugar and the result?

That's right -- ISIS. And the conclusion: all of the troops killed, wounded and mentally unbalanced by these wars were used for no good thing. What do they see when they look into the mirror now?

For a war to be just, the sum of the good must exceed the evil, suffering and death required to achieve it. What good has been achieved since the U.S. invasion in 2002?

Ronald Reagan's question holds: "Are you better off than you were four years ago?" 14 years ago?

The War on Terror isn't tough on terrorism, it's tough on the everyday working American. We are spending our treasure on no Good Thing.

posted by rangeragainstwar at 3:44 PM 0 comments