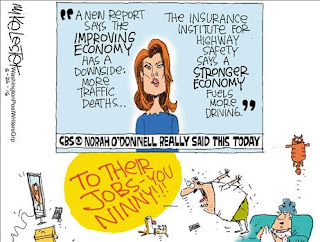 We are never deceived;
we deceive ourselves
--Goethe

The biggest lie is that our election are about freedom and democracy. These are the same lies that we accept as the basis of our wars. Wars are not about anything but power, since democracy and freedom are never achieved with a bayoneted rifle.

Our elections and wars are based upon capitalism, not democracy. This has been the truth since the founding of our nation. Every election walks the fault line between Jeffersonian (agrarian homeland focus) and Hamiltonian (strong armies, banks and foreign policy) thought.

If words have no fixed meaning or are lies, then so, too, are our laws. Words are the only thing that binds us to the world and reveals its meaning. If words are untruthful the the resultant insincerity is the precursor to societal decline.

Freedom and democracy are words that have no fixed meaning, for we are told the elections in Egypt and Afghanistan provided democracy and freedom to those countries, but should ask, "how?"

Our elections are about two very simple capitalistic thoughts. With one party the top one percent get to exploit what used to be the middle class (which is now the working class) and trickle up the money from the many to the few.

The other party wants to take from the top and distribute to the lower income bracket. At the same time, they pretend to support a middle class democracy.

Neither strategy enhances democracy or freedom. Elections simply decide where the money will flow and which party gets to exploit the middle class. In both scenarios, the middle class takes a beating.

If one accepts this logic on the topic of elections then one must accept the use of lies as party planks, for it unlikely that people will vote to be exploited.

History has proven that all elections have been based upon lies, false suppositions and faulty assumptions or interpretations of facts.

And we the people continue to march as if our voices matter.

That's the lie of democracy.

posted by rangeragainstwar at 4:10 PM 9 comments