RANGER AGAINST WAR: Bunker Hill--No Beans About It <

Bunker Hill--No Beans About It 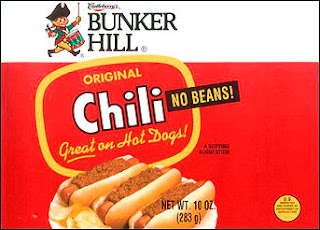 Ranger can't protect you from all the things that might do you in, but when we saw the cute Minuteman on this label for possibly tainted potted meat product, we felt it was a patriot's duty to inform you.

Castleberry, subsidiary of Bumble Bee, has recalled almost 3/4 of a million pounds of potted meat recently due to possible infection with Clostridium botulinum, the U.S. Department of Agriculture's Food Safety and Inspection Service announced 7/21/07. Personally, I was jarred by the graphics, which I thought were passe in the 80's.

Now, as to why you're putting a potted meat product atop your nitrate-preserved meat product is another health issue altogether. It doesn't even have beans, so there's little health justification.

The USDA does have not offer color threat levels, but botulism is a Level I warning, with a "reasonable probability of serious health consequences or death," a pretty serious consequence in itself.

The USDA warnings are compelling showing as they do that Americans can get killed either through lax governmental oversight (=poisoned food), or via the vast expenditure of national treasure (KIA), as with the seven young soldiers who died on Roberts Ridge in the previous post. Either through E. coli or botulinum toxin, Americans are just as dead, under your government's aegis. And in neither case is your money being spent to protect, preserve, enhance or extend life.
As an aside, consumers with food safety questions can "Ask Karen," the FSIS virtual representative of indefinite ethnicity available 24 hours a day at AskKaren.gov. That sure takes a load off my mind.

"In disposing of any cans that remain in homes, or in retail establishments with just a few cans on hand, Castleberry's and health officials are instructing people to double bag the cans in plastic bags that are tightly closed before being placed in a trash receptacle for non-recyclable trash outside of the home.

"If any of the cans are swollen, bulging or leaking, the consumer should put on gloves and eye protection before double-bagging and disposing of the cans. Slowly remove gloves and dispose of them after use. People should then wash their hands with soap and running water for at least two minutes."

Just so you know.

posted by rangeragainstwar at 4:53 PM