RANGER AGAINST WAR: I've Seen them Come, and I've Seen Them Go <

I've Seen them Come, and I've Seen Them Go 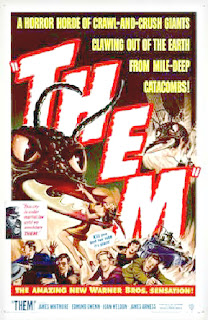 You'll dress only in attire specially sanctioned by MiB special
Services. You'll conform to the identity we give you,
eat where we tell you, live where we tell you.
From now on you'll have no identifying marks
of any kind. You'll not stand out in any way.

Your entire image is crafted to leave no lasting memory
with anyone you encounter. You're a rumor, recognizable
only as deja vu and dismissed just as quickly. You don't exist;
you were never even born. Anonymity is your name.
Silence your native tongue. You're no longer part of the System.
You're above the System. Over it. Beyond it.
We're "them." We're "they." We are the Men in Black.

We may be witnessing a Biblical prophecy come true
--the beasts will reign over the earth.
--Them (1954)

Going along with the current leadership's attunement to the music of the spheres, Ranger takes this off-target landing as ominous (Military Parachustists Miss Target, Land in Colorado Prison.)

"Military officials said 25 heavily armed parachutists who landed in a cornfield on the grounds of a Colorado prison last week were on a training mission but landed about 3 miles off target.

"'Those were Special Operations Command forces conducting routine training,' Army Col. Hans Bush, a spokesman for the command at MacDill Air Force Base, Fla., said Monday. He declined to identify the units that landed at Fremont Correctional Facility but said the target was Fremont County Airport."

The parachutists presented the prison guards with documents identifying them as Defense Department employees.

Why does Ranger find none of the above very reassuring. Do SOF troops not carry ID cards/tags as required by the Geneva Convention rules? Maybe the GC has been contravened in America.

Why do the SOF'ers even have to get cute with their ID's? Hell, they're not even deployed.

posted by rangeragainstwar at 11:58 AM

Jay: Wait a minute. You just flash that thing, it erases her memory, and you just make up a new one?

Jay: And that weak-ass story's the best you can come up with?

I haven't seen you in some time. It's Natalie from the library years ago! I wanted to let you know about this book I've just finished called Baghdad Burning by Riverbend. It goes along with exactly the kinds of things you are talking about. It's based on a girl who blogged from Iraq. Unfortunately, she hasn't posted anything since April and I fear she is dead. She really had some great things to say and is a really smart girl. Let me know if you read it and what you think.

Hope you are doing well!