RANGER AGAINST WAR: The Numbers Game < 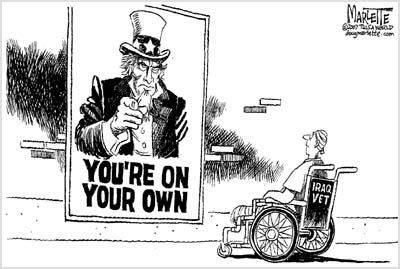 Ranger Question of the Day: Since this war has lasted longer than WW II, why is GWB only now getting around to solving issues concerning wounded military members?

Lorne Lutch: I was pretty good at killing Viet Cong, but that doesn't mean I wanna make a career out of it
--Thanks for Smoking (2005)

The report recently released by the President's Commission on Care for America's Returning Wounded Warriors--a title galling in it's imprint of warrior status on professional soldiers--notes that 28,000 troops have been wounded thus far in Iraq and Afghanistan ("Overhaul Urged in Care For Troops").

Of those, 2,700 have sustained traumatic brain injuries; they also report up to 20% of Iraq veterans report post-traumatic stress syndrome (PTSD). "The Department of Veterans Affairs has treated more than 52,000 returning Iraq and Afghanistan veterans for PTSD," according to the report.

Ranger suggests a radical correction: a large portion of the 2,700 who have sustained traumatic brain injury could be added to the current death toll of 3,000, almost doubling the current number.

Is it not more correct to say 5,700 fine people were lost in this war? If their bodies are alive but their brains not functional, are they not, in a sense, killed in action?

Ranger's comments are not meant dismissively or disrespectfully, but are an effort to clarify what is actually happening to our service members. The lifetime implications of these brain injuries are horrible to contemplate.

This is a needless slaughter and sacrifice of American military members for absolutely no forseeable benefit to this nation.

posted by rangeragainstwar at 12:19 AM

And suicides "in country" and back at home are rising as well. The cost of this war SHOULD be staggering America in more than finances. (I am off to do after surgery care (for my stepmom)for almost fours weeks as of tomorrow....I dread coming back to the US to catch up on news after no computer, no news, no mail. Be sure this blog will be one of the first I will catch up on!)

Thank you, and best to you on your mission of mercy. I imagine the respite from the grinding news cycle will be a tonic.