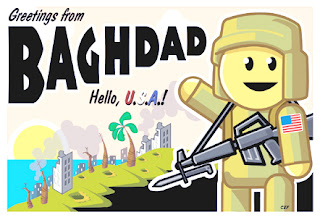 Ralph Peters (Lt. Col., ret.) wrote the standard pap in his recent USA Today opinion piece (General Failure) about protest, moral courage and proficiency, and like all dialog on the war, it misses the key point.
Peters charges the generals' greatest shortcomings are that "they failed in their duty to inform decision-makers as to what war means and requires." Not so.

The salient issue is protest, but not of the type discussed. Who cares that General Shinseki was fired because he predicted that 200+ thousand soldiers were needed for the invasion? Of course he was right and Rumsfeld wrong--so what?

What Shinseki should have been fired for was his refusal to sign or issue orders requiring U.S. forces to invade a country that didn't aggress against us in any meaningful manner. If U.S. civilian leadership would not recognize the illegal nature of this elective invasion, then the onus should have been shouldered by the Chairman Joint Chiefs of Staff.

By the time a soldier achieves four stars, surely the international rules of warfare should be within his store of technical knowledge. Or so one would like to believe. The MSM, Departments of Justice, State and Defense and Congress are strangely silent on this aspect of the war.

Nuremberg Trials championed by the U.S. after WW II hung German Field Marshals for planning and participating in wars of aggression, along with other monstrosities. It seems that wars of aggression linked with regime change is the new face of democracy.

posted by rangeragainstwar at 1:00 PM