RANGER AGAINST WAR: Droning On < 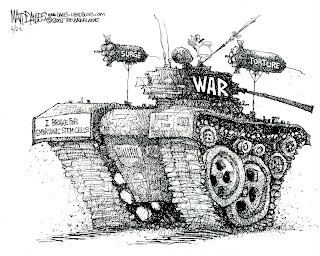 We ought always to deal justly, not only with those who
are just to us,
but likewise to those who endeavor to injure us;
and this, for fear lest by rendering them evil for evil,
we should fall into the same vice
--Hierocles of Alexandria, ca. 430

A few examples of the war on terminology being fed to the general public. This is from an article on the Reaper drones in USA Today (Faster, Deadlier Pilotless Plane Bound for Afghanistan):

"Air Force officials cite the June 2006 killing of al-Qaeda in Iraq leader Abu Musab al-Zarqawi, who was tracked by a Predator but ultimately killed by bombs dropped by an F-16. The Reaper 'is ideal for that type of target' . . ."

Adversary Al-Zarqawi is now become "an ideal target." If this were true, wouldn't he be a more appropriate target for an Infantry or Iraqi Police operation designed to capture him so that he could face justice on the world market?

If he resisted, then he becomes a target and the benefactor of an assault team. The U.S. military has the bulk of U.S. ground combat power in Iraq, yet they must resort to using millions of dollars worth of razzle dazzle to kill one individual?

Seems like a big waste of assets to this Ranger.

"This is the future," said Chad Miner, chief of weapons and tactics at Creech [AFB], a Predator trainer and an F-16 pilot. "I would love to … jump in an F-16 and go. But I'm a more valuable asset to the military doing this. It's not the sexiest answer, but it's true."

Killing people in any way, shape or form is not sexy. It is destruction, the antithesis of any life-affirming activity which might be termed sexy.

Maybe Air Force types have the benefit of thousands of meters of separation from their targets. But when sex is associated with the project of killing, one has crossed into deviant thinking.

posted by rangeragainstwar at 5:38 PM

we used to tell the torch jockeys, on the battlefield, proximity is truth.

there's no proximity here. guys like bush and the neocons would love this shit because there are so many layers of technology and distance between order, act, and result. probably reminds him about signing all those lovely execution orders when he was guvner. "see ah takes this here pen, sign mah name and sumbuddy dies, great country we live in hoss."

i doubt he's ever read arturo perez-reverte who when writing about the spanish siege of breda said:


on the battlefield proximity is truth.

I love the tank! Hypocracy is everywhere.

the battlefield is where cultures surely meet.It's a cultural awareness program viewed thru a rifle sight. ranger jim