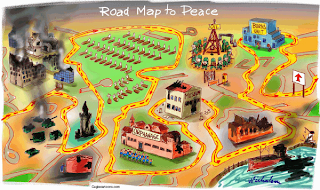 And after all we're only ordinary men
Me and you
God only knows it's not what we would choose to do
"Forward" he cried from the rear and the front rank died
And the General sat, and the lines on the map
Moved from side to side
--Us and Them, Pink Floyd
______________

To recap the first failure of Ninja (Operation Red Wings), the action for which Patrick Murphy earned the Medal of Honor: the recon team had been discovered by local goatherds, and instead of immediate radio request for exfiltration, the 4-man team maneuvered position and were ambushed the next morning by possibly 200 Taliban.

The next major failure is shattering, and even Miniter cannot draw a halo on it.

Twenty minutes after the helicopters were dispatched, "the pilot had bad news":

"The two Black Hawks, including Healy's were too heavy to vault over the peaks of Afghanistan's eastern Kunar province. . . . the choppers diverted to Jalalabad, where 16 men were ordered off the Black Hawks. With more than 10 minutes lost, the two helicopters decided to outrun their slower, armored escorts. Contact with the trapped SEAL team had been lost."

How can this be? This is the supposed 80-man team at-the-ready. These are Night Stalkers -- an elite SOF asset -- and we are to understand they do not know the load limits of their birds, nor the elevation of the terrain involved? This is a tragicomedy, a Chinese fire drill.

When the Black Hawks enter the landing zone, Taliban fire an RPG round, which explodes inside the first helicopter.

"The SEALS onboard the second Black Hawk were horrified to see the lead chopper explode, tilt its nose upward and spill men to the ground. The remaining air crew, belted in, were trapped inside a flaming comet, plunging down into a boulder-choked ravine. Healy, McGreevy and a dozen others were gone."

Why would any leader attempt an insertion under enemy fire without the suppressive fire of gunships? This is plain foolhardy and cannot be justified even as a desperation measure. If the recon team just got destroyed, it is a safe assumption that there will be heavy anti-aircraft fire to include automatic weapons and RPG's.

Miniter assures us the SEALs inside the 2nd copter "desperately wanted to land and make the enemy pay. But the radio gave different orders: leave now." Fortunately someone was now making decisions on a rational rather than emotional basis.

One cannot make the enemy pay. You can kill them, but that won't return the 19 friendly KIA's to life. This is not a computer game, it is real-life brutal combat.

When Miniter, writing about the rescue of the bodies, says, "the cavalry had come," it's time to tune out. The question remains: Where was the 80-man assault element previously mentioned as a component of this operation?

If the plan called for an 80-man reaction force, then artillery or aerial rocket artillery should have been pre-planned to support the assault and recon teams' efforts. In addition, aviation assets should have been on-station and ready to launch. Yeah, sure, the cavalry had come, but they were riding dead horses.

The Taliban were controlling the pace of battle. We gave up the principle of initiative when the first shot was fired. It is safe to assume that anti-coalition forces were pushing the SEALs down into a pre-planned kill zone.

The Taliban displayed a level of proficiency one would expect of U.S. SOF ground assets. They fought good, solid, well-planned small unit Infantry action. Murphy's team was totally reactive and defensive, therefore, they were the designated losers.

This entire operation seems based on a hope and a prayer, and not a chaplain anywhere in sight. The author calls it a "rescue", but it was a salvage operation and a body recovery mission. Nobody were rescued except Marcus Luttrell, who survived with a broken back by the good graces of goatherd who took him into his stone hut.

This failure of colossal proportions, like the Pat Tillman incident, proves the Army maxim: when a big screw up occurs, promote, or award medals. The Army's answer to an eraser.

Addendum: Author Richard Miniter is the best-selling author of two books which Borders does not stock. Each explains how Bill Clinton is to blame for Afghanistan and Osama bin Laden. You can guess the audience which drove these books into best-seller status. That's right -- your fellow Americans.

Miniter's non-credentials as a "terrorism expert" include a terminal degree of a B.A. in philosophy from a liberal arts college. He has never worked in the military or government. He would make a fine writer of YA adventure stories.

posted by rangeragainstwar at 4:20 PM

Read a bit...exhaled...got up...walked around...read a bit more...finished.... Very, very sad and it tells a tale of truth far larger than this single tragic incident. Ranger, many thanks for another courageous post. (I'm sure the flak is about to arrive.) GSJ

YA - young adult??? You give Miniter too much credit, fairy tales are more his style.

The editorial board at the American Legion magazine has been very partisan in their choice of article writers or perhaps incompetent. Dinesh D'souza and other wingnuts have quite often gotten published there in the past several years. But I think they are getting some negative feedback from the rank and file or maybe the new national commander is putting the brakes on.

You, Jim, and FDChief should submit an essay or full article. Remember thet history is made by those who write it. The neocons know this and have plenty of Miniters, D'souzas, Gaffneys, Vicky Hansons and others that are publishing like crazy trying to define this decade their way.

GSJ, these essays are as hard for me to write as they are for you to read.When the flak arrives i try to fly under it but this is difficult since some of it is so low.
hope you are better. jim

Mike, i'm on the road for a funeral that i had to attend. i've asked Lisa to send this essay to the amer. leg. CDR and magazine. i feel this is pissing up a rope but we do what we can.this shit is pure propaganda and the legion members are paying for it with their dues.
As an aside i saw a Mccain ad in which he said the islamic terrorists want to destroy us- he's selling the same old formula of fear. He's on the same sheet as Miniter and the legion. jim

there are so many things wrong with the operation. it was doomed from the beginning.

personal obsessions almost always make for bad operations. sherman finally realized that in his dealings with the odious personally, but incredibly vexing nathan bedford forrest. they had a history that began at shiloh when forrest's light cavalry kept the full might of the union army from absolutely crushing the fleeing confederates. after shiloh sherman was obsessed with pinpointing the location of forrest, and avoiding any and all engagement with him. forrest loved it. his reputation was enhanced, his support from the people in the combat theatres increased, as did his war chest.

sherman realized that and after the fall of vicksburg he detatched cavalry under then col. crook (who utilized a full platoon of white mountain apaches as scouts and shock troops, this is also where crook received his apache name, nantan lupan or, old wolf) with the mission of bedeviling the devil himself. forrest, independantly hounded, ceased to be a strategic or tactical factor.

if this one individual warlord, or commander, or whatever the fuck they want to call him, was such a thorn in the side of the SEALs, why not simply deploy a hunter/killer action utilizing barretts (long rifles) or radios to call in waiting air power when the target is fixed?

calling in ground troops for something like that is not what i would call a "force multiplier."

you might recall me mentioning having called in a full on arclight against a communist position. 1 SEAL, 1 radio, a bunch of 52s, and that problem was solved, permantly.

what prevented the commander and the planners from taking that simple, and brutally effective option? a public gundown, using a sniper team, or teams, would have had a huge psychological impact on every single fighter under the target's command.

again, the concept of force mulitiplication is totally absent here. they are seeking a standup fight.

in my teams that the last fucking thing we wanted. it was not what we were designed and trained to do. we were "15 minutes of hell, then disappear" fighters, and in most cases, we didn't want to fight at all. fights were not in our lexicon, killings and ass kickings, sure, but fights are messy.

the failure to request immediate extraction once the cover is blown was beyond stupid. it was hubristic and should have been grounds for action under the UCMJ for all kinds of purposeful folly.

the absence of contingency planning, illustrated by a cobbled together response after the situation was already far beyond a hobo clusterfuck is another example of a failure of command. again, probably hubris.

of course, you won't hear that in the medal citations. don't forget the slaughter at wounded knee produced 20 MOHs.

MB, Anybody would call SOF force multipliers. Macvsog had a greater kill ratio than any unit inj the war and they used tactics as you described BEFORE their were organic air assets in SOF.
All the other deficiencies of this operation would not have happened in a 70's sog recon.
As for the Barrett - why not let Force Recon do this ? jim

Thanks for the suggestion. Jim and I do submit, and should do more of it. FDChief for sure--he's scorching, both in his indignation and his faultless command of history.

All of you guys from the old Intel-dump are awesome--Publius, Chief, Rick98c--you all know who you are. On any given evening that was hot LZ, and I was always enthralled by the dialog. I hope every sane and lucid person writes to the papers and his Congress critters.

This is how change is effected.

Your statement: "the failure to request immediate extraction once the cover is blown was beyond stupid. it was hubristic and should have been grounds for action under the UCMJ for all kinds of purposeful folly" is exactly how Jim feels.

What a Catch-22: Instead of reprimands, we have awards.