RANGER AGAINST WAR: Ready for L.A.? < 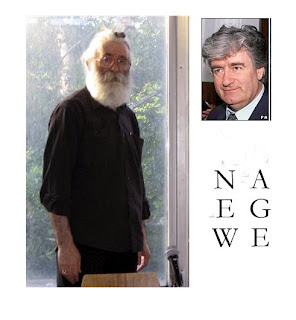 Karadzic, Now and Then

If you're down he'll pick you up Dr. Robert,

Take a drink from his special cup Dr. Robert
--Dr. Robert, The Beatles
______________
The world of alternative healing is stranger than you can imagine. Beyond your iridiology, hot rocks or chakra elevating via digeridoo, consider the case of captured war crimes suspect Radovan Karadzic.

Mr. Karadzic has been living on the lam for a decade in Serbia's capital, Belgrade, as neo- Rasputin New Ager with-his-own-website [here], Dr. Dragan "David" Dabic

Looking every bit Dr. Andrew Weil's alter-ego, he held well-attended conferences and was even a regular contributor to Zdrav Život (Healthy Life) magazine. Radio Netherlands reports Karadzic "Led a Normal Life," as such suffices as normal over there.

Now, Panama hat-wearing Dr. Dragan of the nifty black cowlick will be extradited to the U.N. tribunal in The Hague for his part in genocidal crimes during the 1992-95 Balkan War.

Meanwhile, witchdoctors are hunting down albinos in Zimbabwe for their body parts and hair, which are then rendered into potions which will help bring affluence upon the lucky ingesters. Same-same in Tanzania and Kenya. This is not the day of the light-skinned.

Times are tough, and people just wanna feel better. Exercycles and Atkins are so Old School.

Which perhaps tends to show that the so-called fine line between far right fanatics and far left lunatics is thinner than we think or non-existent.

New Age anything irritates me. But knowing that some of those folks are actually well-meaning, what pisses me off most is that if the governments of the world continue looting at the behest of their corporate masters, that kind of nonsense will be the only option the rest of us can afford. Yes, I am having a snarky day, why do you ask?

i have many bones to pick with the new age bullshitters around sedona. right now my cousin is spearheading a cease and desist action on some glassy eyed motherfuckers who are selling "Hopi Skin Creme." claiming it is a native american product.

we never had cocoa butter, or any of the ingredients.

they are refusing any and all pressure. they claim divine guidance.

the arrest in the balkans gives me small hope for a bush, addington, rove, gonzales, or yoo frogmarch decades down the road.

i hope that, in the words of john adams,

the wheels of justice grind slow, but exceedingly fine.

It just goes to prove: Never trust a hippie ;-)

In general, would just like to say that this blog is like a sane breathingspace to read. Thank you both.

Minstrel? Going tribal? Oh, that sounds like ever so much more fun than merely going postal! My tiny tribal drop is Comanche....even going just a tiny bit tribal would get me in SO much trouble!

the comanche are distant cousins to the apache.

they were a rowdy bunch of fun lovers.

william techumseh sherman said the comanche were the finest light cavalry he had ever seen.

and he had seen forrest, hood, stuart, and mosby.

Gosh labrys -- the price of a hot stone treatment is pretty dear, and is usually only to be had at a spa/upscale gym.

The only option many people will be left with for health care is neighborhood services, where the options are rather limited. For example, you got a tooth problem? Extraction is the cure.

Oh, the Sedona entrepreneurs are a trip, no? I'm sure they served as the template for Mr. Karadzic.

My favorite practitioner was one who offered past life readings in the following manner: you lie on the table, he shuts the door and leaves the room, returning an hour later to give you his read.

Brilliant! I fancied he could take care of household chores, maybe shop, while the client rest, and return with some heady mumbo-jumbo. After all, no one was a washer-woman or chimney sweep in a past life, right?

Thank you for being here. I read your input at Abu M., and always respect your perspective.