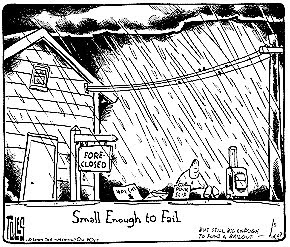 Wherever the standard of freedom and independence
has been or shall be unfurled, there will [America’s] heart,
her benedictions and her prayers be.

But she goes not abroad in search of monsters to destroy.
She is the well-wisher to the freedom and independence of all.
She is the champion and vindicator only of her own.
--John Quincy Adams
_______________

We recently received a very considered letter from an esteemed reader and business owner on the state of our economy. His story is repeated many times over, throughout our nation. His thinking about "Man Years" and how to keep them being wasted was all the more impressive knowing that this man's politics hew to the conservative.

Yet for the good of his country, he concedes that government infrastructure projects may be necessary, and would be preferable to the crippling unemployment with which the country now struggles. Not only are the skills of otherwise productive members of society lying fallow, but the self-esteem garnered from participation in meaningful work is missing -- an intangible essential for a thriving economy.

Here is our friend's letter:

Both my wife who is in her early 50's with a BA and my daughter who recently graduated with a BA in business are both looking for jobs. Both are totally employable and have long job histories.

Finally we are starting to see some signs of life though barely. Still even though last quarter saw a rise in economy due to inventory adjustments, most US distributors of electronic equipment are keeping minimum stocks and we are having to directly to manufacturers in Germany and China to get parts quickly. Liquidity has vanished from the economy as has any parts inventory or surpluses in people or capital. …. US manufacturing went on a going out of business sale about 15 months ago and it hasn’t really ended – just not going down as fast.

If I were in DC right now, I’d be advocating a press to full employment (5-6%) at any cost. Dry dusty economists forget the social impact of loss of a job to a family, the lack of reward for constructive work, the side ills of alcoholism, food stamps, etc that come when work ends.

We need to focus on Man Years in my opinion. The one thing that can never be recovered – time. I’d prefer people have private sector jobs, but failing that I’d prefer a government funded job, even a temporary one to unemployment. This is what is getting lost in the statistics – we pay people to work or not to work but bridges get fixed, kids get educated and so on only when work – not unemployment – is subsidized.

The tax credit/cut plans for small business aren’t going to have the desired effect because so many companies are operating at a loss right now. Given the paper thin margins contractors are willing to bid for jobs right now, I’d suggest we purchase long lived asset government programs – highways, building repair, build reconstruction, etc.

In DC recently I was at the Supreme Court building. It was built in the depression for 9.5 million and since it came in under budget they furnished it with the leftovers. We are at a similar point in time and if we think multi-year about our investments we can benefit for decades with the work – the lost man years – we invest in right now. … A similar return would come from education – investment in our kids – but that is another chapter.

Here's a little something China doing as is Spain provides job when being built and jobs to run them. It won't happen here, O did put 5B in the budget for this and Calif. gets 2 of it. This is just enough to do another study that will be done by campaign supporters company.

it would be nice too see a push on agriculture. I know the first lady was giving lip-service to home gardens. we need food. good food. real food. not subsidized "fast" food (corn). this would solve half of our health problems. oh yeah, and to quench our thirst for paranoia and need to eradicate all enemies of the state and freedom...high powered telescopes.

Nick Taylor published a book called American Made: When FDR Put The Nation To Work. It is an excellent piece of scholarship and worthy of reading as we face this new great depression.

At FDR's 1933 inauguration, 25% were unemployed, 5500 banks had failed (and banking holidays were springing up across the Midwest), thousands of veterans and their families had been tear gassed out of the capital city, and there were actual left-wing political parties (even Communists) that were strong enough to march thousands on DC's streets.

Within that first year, FDR put more than 4.2 MILLION people to work via the Federal Emergency Relief Agency, Civilian Conservation Corps and Civil Works Administration - all run by Harry Hopkins and a staff of under 150 (who were paid a combined total monthly salary of $22,000). Total cost in the first year -- about $900million.

Now, that was a government determined to help the common American. Can we say the same of today's government?

I think a key difference from then, however, is that the level of pain, as felt by both the common people and their elected officials, simply is not yet high enough. I know for many parts of the country (eg: CA, MI, IL, FL, NV) this is hard to believe. But, it is not so hard to believe when one examines the bubble in which our political elites are living. They have taken well care of themselves first and still believe that their scraps will suffice to larder the millions of empty stomachs. It's their version of the "fishes and loaves."

Unless, and until that level of pain comes home to DC, I expect little to change. And I certainly do not expect Pres Obama to even consider giving a speech like this one?

PS -- All of this was opposed by a group called the American Liberty League, formed in August 1934 promising an "unremitting" fight against "government encroachments upon the rights of citizens." Its chief movers included Alfred Sloan and William Knudsen (GM), the Du Pont family, and angry bypassed democrat Al Smith. The ALL would work hand in glove with the Republican National Committee through the 1936 election to vilify FDR, the CWA, PWA and Hopkins. (Tayor, p153, 217). Does this at all sound familiar??? Tea baggers??