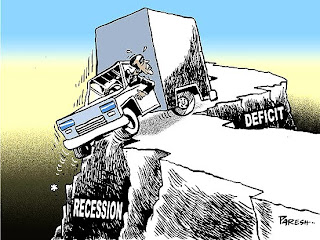 Businesses are dying faster than Haitians in an earthquake, and the losses toll weekly. Even in Tallahassee -- a relative oasis since it houses the State government and two universities -- the malls are as lively as death camps. This weekend's paper reports on the closing of local Boys and Girls clubs, the very services that help keep a society thriving.

What businesses are prospering? Check cashing scam joints, Payday Loans which legally charge patrons the usurious fees of 38% interest rate on their loans, title loans, foreclosure storefronts and pawnshops. These are the big winners in the Russian roulette eof modern life in the fast lane.

All are legally entitles to screw the little man with no realistic prospects right into the ground. Legally, just like credit card companies, but that's another story.

During my last several trips to the pawnbrokers, there was a heightened sense of desperation among those pawning their belongings. On Friday the lines were long, and the wait for service slow. People don't have money to get through the weekend, let alone the week or month. Poverty is chewing on their asses like one of Michael Vick's pit bulls.

These people are desperate, and Ranger wonders: Have any of our leaders have ever visited a pawnshop or talked to the people humbly and sadly awaiting their turn in line to sell or pawn their meager possessions? It occurred to me that there should be two lines, "Hope" and "Change"; you pay your money, you take your chances.

A technique sometimes used by MACVSOG Reconnaissance teams was called "Running for your life". The teams were not designed as fighting units, but rather intelligence gathering. If they fought they often died, and many teams disappeared from the face of the earth.

It was also called "Breaking contact", in which immediate action drill was initiated and all members dropped everything except their getaway gear. The individuals stripped down to run, and their ability to do so meant the difference between living or dying. When the teams ran they discarded everything except survival-oriented items.

The people in pawnshops are similar as they, too, are fighting for their lives by dropping all non-essential items to facilitate their survival for one more day. This is not Lost Vanuatu -- this is Lost in America.

Since the people have no hope of positive change, we can blow smoke up their asses and call it sunshine.

posted by rangeragainstwar at 9:40 AM

well, you know good people that's a sure sign
you got bullfrogs on your mind.

but, never forget, columbus had his first trip to this hemisphere financed with isabella pawned her jewels.

pawn shops, by and large, are tightly regulated and pretty honest. i do some consulting with local pawnbrokers evaluating and pricing instruments. if somebody brings something in for pawn or sale and the broker doesn't know what the value is, they call me, most of the time the price that they agree on is something that reflects fair market.

Let's not forget what happened the last time this sort of hard economic times hit the industrialized world.

The rise of the West coincided with the Industrial Revolution. The governments of the day had neither the inclination nor the plans to do anything about the massive dislocation of their agricultural societies and the rise of the truly astounding urban poverty that eclipsed the "normal" rural poverty that had been the lot of 95% of the people of the United States and Europe until that time.

Us little folks tried to fight - we tried to unionize, tried to first beg, then shame, the force our political and economic masters to care how many of us died of cholera, black lung and typhus in the slums they built for us.

Finally, after the oligarchs defeated us in the Oughts and early Teens the slaughter of WW1 broke everything loose. Communists won in Russia and Spain, fascists in Italy and Germany (and later Spain), while the domestic politics of France and Britain were paralyzed by class hatreds and old resentments.

Let's not forget our own New Deal - the product of the fear of Red Terror driven into our own oligarchs by their massive fail in 1929. FDR was able to drive the tiny nail of Social Security into the forehead of the wealthy only because they feared that us proles, with nothing left ot lose, would storm their Long Island castles and leave them and their families dangling from their own eaves.

Perhaps we need a bit of just such terror today...

Hi Jim and Lisa,
Boy, I'm coming to Florida next time I need a payday loan. In Las Vegas(nearest big town), rates start at about 75% and go to 200%. Of course the default rates are bad, so they might not be making as much as we think.
Good military/economic analogy, too.

Or 900 down and bi-weekly payments for so many years that the actual cost ends up being around 10,000 dollars or more.

If any payment is even a minute late, for any reason, the car is repo-ed AND the entire rest of the note is accelerated and turned over for collection.

Yet people drive away in these debt traps so often that the lots around here turn over a big chunk of their inventory almost weekly.

Is that large a segment of the working population so strapped that they can't save up a few thousand in time to get a decent ride? Hmmmmmmm.

Yes, they are that debt-trapped. We happened to have the experience of sitting in on a court day for debtors recently. Quite an experience that was.

It is quite a racket, how the banks and other institutions get their money out of the poor.

And like you say, one minute late, watch out.

Yes, pawnbrokers are regulated and generally honest, but this doesn't lessen the plight of those who are increasingly frequenting them.

Yes, that unrest, or potential unrest, is how the hoi polloi get anything. We seem to have lost the art of the boycott and the strike. The masses seem to be mainlining the Soma of their choice.

"in conclusion, suck it bitch"

And there you have it; the reason that the United States will always be the Land of the Free...for Those Rich Enough To Afford Their Freedom...

The foolishness of the foolish fool. The most powerful weapon of our political masters.

If this poor jackhole wasn't such a dick about his ignorance you could almost pity him - he's too stupid to understand what's bending him over and using him like a rubber fuckdoll.

I see you deleted the jackhole, Lisa. It's almost too bad - helps explain a lot about the pawnshop lines and the "tote-the-note" scams.

You are such a steadfast friend, I could not deny you the pleasure of confronting our troll, so without further ado:

in conclusion, suck it bitch"

FDC, the oligarchs think they know just how far they can push. They've been practicing this for a lot longer then the beginning of the industrial revolution. They push as far as they can and then back off and repeat. Always pushing the line a little further against the working people and those unable to work. Every few generations the heirs forget the lessons of the ancestors and they push too far. But their own heirs survive and begin the cycle again after a decade or 2 or reform to level the playing field. Seems to be roughly a 100 yr cycle although your countries/societies mileage may vary.

Terrible: I'd be excited if I thought that my kids' generation would enjoy decorating he tree of liberty with the ripe fruit of a couple of thousand bankers, industrialists, politicians and assorted wealthy scum.

What I FEAR is that with the power of the mass media - a power undreamed of by the old-school tyrants like the Bourbons and the Rockefellers - and the fat luxuries of civilization that the malefactors of great wealth have finally neutered the bull of rebellion. Perhaps after our nation has fallen into a post-imperial decline...but look at Britain; the elites are still there long after leading the great empire off the cliff.

Naah. Who wants to burn some mansions and kill some aristos when there's something REALLY good on the TiVO?

The course of the past few years have really made me question just how far the elites can push their luck. They seem to be pushing hard now... as if they all know that the last lifeboats are pulling away from the mighty, but sinking, ship.

And the rubes in steerage? Well, the band(s) keep playing. To wit, we still have the Super Bowl and I hear some rapper named Lil Wayne is supposed to go to jail!

Sigh. I weep for the Republic I thought I knew.