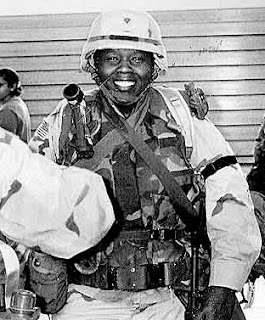 Shoshana Johnson, the first U.S. Black female Prisoner of War, has just released her book, "I'm Still Standing". Her story is important because it shows the weakness of the U.S. Army specifically, and the military in general.

Enlisted personnel like Johnson and her truck mate Jessica Lynch were neither trained nor mentally prepared for ground combat. These support troops theoretically should never be in direct contact with enemy forces, but they were. Their lack of preparedness indicates defective planning, training and execution well beyond the control of Spec 4 Johnson.

Recent press for her book got several details wrong. These soldiers were not "abducted"; they were captured on the field of battle. Abducted implies illegitimacy of action, which was not the case. The U.S. Army was invading a country and the U.S. soldiers were legitimately killed and captured.

Johnson's pre-deployment photo shows another weakness of the system: Where are her ammo pouches for her rifle magazines? She is carrying a lot of gear on her body, but the magazines are not in their normal place on the web belt. This is not a comment against Johnson, but the system.

Johnson writes, "I was shaking. I was saying the Lord's Prayer to myself...when someone grabbed my legs and pulled me from my shelter. And like that, I became a prisoner of war (First Black Female Prisoner of War Tells Harrowing Tale).'' Like Lynch, why wasn't she working her weapon? Prayer isn't as effective as a rifle in such a scenario.

"Johnson was rescued in April 2003, but by late August, she was severely depressed, suffering from post-traumatic stress disorder, and at risk of endangering her relationship with her daughter. She requested a medical discharge." If a soldier is shot through both ankles, she should be considered for medical retirement, without even factoring in PTSD.

Ms. Johnson did the best she could under the circumstances, and cannot be faulted. She was not combat arms. Ranger wishes her the best in life.

And by the way, Shoshana -- join the Disabled American Veterans and the Military Order of the Purple Heart and get help fighting for your rights. You deserved it because you earned it. Ranger is here if you want some advice. He is neither white nor black, but rather, O.D.

posted by rangeragainstwar at 9:59 PM

"I was shaking. I was saying the Lord's Prayer to myself...when someone grabbed my legs and pulled me from my shelter. And like that, I became a prisoner of war (First Black Female Prisoner of War Tells Harrowing Tale).'' Like Lynch, why wasn't she working her weapon? Prayer isn't as effective as a rifle in such a scenario.
WELL, IT SEEMED TO WORK FOR THEM.

I recently red a critical book written by a German general in the early 80's.

He made an interesting remark; earlier armies had a large following of traders, craftsmen, service personnel, whores and others.
The modern army system integrated these services (usually less the whores) into support branches by the late 19th century when technical troops (especially railway troops) were on the rise.

Today we've got the illusion that modern armies are composed of 100% soldiers, when in fact they're about 20% fighters and 80% service and support personnel.

It's a constant challenge to push a modern army away from this towards an "everyone a rifleman" or "everyone an infantryman" attitude.

I say let every soldier pass a six month infantry training instead of a 2-4 month basic training, but the chance that this will happen is miniscule.

Hmmmm.........now this posting does seem to point to the advantages of USMC training over the Army's ;-)

Well, when you take sven's 20/80 tooth-to-tail ratio, and you filter it through the Late Col Hebert's "Ass in the Grass Count", you will be alarmed even more. In short, something not to be advertised; better to call them all troops.

Not quite sure what you mean; praying didn't shoot poor Shoshana through the ankles; a gun DID.

Holy catz, I wouldn't have noticed the fact she had no mag pouches from that pic. That's totally f'd up. Why in the name of God would they send logistics troops into the field minus a minimal combat load (200 rds)? I knew for a long time it was stupid that the Army was using Humvees in operations where they needed AIFVs instead (The Battle of the Bakara Market in Somalia proved that).

Brooklyn Redleg,
IMHO when you're down to 200 rounds you're almost out of ammo.
Remember these soldiers were in trucks and it's always wise to carry beaucoup ammo and grenades.ALWAYS.
I noticed the mags being missing b/c inspecting the troops is essential to a small unit leader. That's why they pay us.
It's a sad statement on my life that i trust my rifle more than i do the idea of God and prayer.
Praying is not a soldierly skill.
jim

Brooklyn Redleg,
I'd like to add.
Pls note her flashlight obstructing any possible way of shouldering her weapon.Not good.
None of what i say is a attack on this individual soldier.
My comments are purely systemic in nature.
jim

To all,
Does anybody know what the black band is around her left arm?
I 've never seen such a thing before.
jim

despite their valiant attempts to remain "in the rear, with the gear," support, clerical, and other troops can easily and suddenly find themselves in the line of fire.

the convoy that carried jessica lynch, shoshanna johnson, and lori piestewa to that ambush made one. wrong. turn.

that's all it takes. when they were that close to a fluid and constantly shifting front, one wrong turn can instantly spell disaster.

it's easy for a unit to carry an attitude of "hey, we're truck drivers" or "laundry men" or what the fuck ever.

soldiers; male or female, to carry the title need to be ready at all times for a fight.

that readiness was on display for the brits when subaltern bromhead and an engineering lieutenant coghill organized kitchen troops, quartermasters and hospital cases to defend roarke's drift.

given leadership, and disciplined performance it can be done.

things like what happened during those first confusing days of the iraq invasion are the natural consequence of rushing to action.

don't get me wrong, there's a time and a place for "riding to the sound of the guns." that kind of action can turn the tide of a day and a battle.

when the political/civilian leadership committs the action before the preparation and training is accomplished, clusterfucks are the natural consequence.

Indeed. It seems like in the scenarios we are participating in today, everyone must be ready to fight, esp. in transit.

MB,
!st -we are talking of grim business and grim consequences that go beyond the individuals performance of duty.
In a Corps scenario of which we were trained in CGSC dictates other than what we saw in this incident.
-One wrong turn can't happen when Corps MP assets are doing traffic control as reqd by OPLANS at that level.To do otherwise in the atk or defense is amature stuff.This wasn't the 1st invasion ever brought to you by the US Army.
-CS and CSS are not supposed to be forward with the infantry. The individual Bns and corresponding support within the unit are responsible to go to the rear and get ammo/beans and POl.These were called FARP's and ASPs etc..That's why we have Bn structure within the Divisions. Anyway that's how it used to be when we remembered how to win wars.That's how it was when i was at Platoon level in a Mech Infy Div.I can't imagine that doctrine has eliminated such critical interplay between supported and support. They ain't never supposed to be under direct fire. Of course when they are this usually means bad buddha.IE Khe Sahn/Chosin/Bataan/Wake etc..
Your cmts are always welcome and spot on.
jim

MB,
An after thot.
At Rourke's Drift ,the Brits may have been ash and trash,BUT they were in the last word-PROFESSIONAL SOLDIERS. They also knew the score without being issued a score card-not so Sp4 Johnson. They didn't have a clue and were unprepared as a new Boy Scout.
In addition the Brits had hard core leadership reflective of that professional demeanor.
We talk of a professional military but it's all hog wash.I remember seeing pics of British Regiments returning from India with 20 year soldiers being buck privates. In the old Army i knew E5s with 20 plus years service and they knew what soldiering meant.
jim

Jim: Not that it applies to this poor woman, but before the arrival of the Combat Corset (aka the Unmerry Widow) I had a set ot TA-50 set up for the field that placed everything - ammo pouches, canteens, first-aid packet - behind my hips.

I got this from the Israelis we liased with in the Sinai; all their bag and baggage was behind the hips. Worth noting that they had no equivalent of our rucksack, substituting instead a buttpack and hauling the ash and trash along in a B-bag which usually stayed with the company HQ/S&T trucks.

Their explanation was that with the ammo pouches at your side you didn't have to roll to change magazines and you kept your profile as low as possible. They also thought that it reduced the possibility of cook-off of rounds from bullet or fragment strikes and the lethality of any that did.

Made sense to me.

So a picture of me in the same pose as Johnson circa 1985 wouldn't have shown ammo pouches in the front, either.

Now, of course, you have the damn "load-bearing vest" which places the ammuntion right over your chest.

Not that I think this explains Johnson's TA-50; pure REMF thinking there. Sad, given what happened to these people. It was like suicide only the Iraqis pulled the trigger...

Chief,
I roger your logic and in SOG the mags were carried as you state, but that's b/c ammo was everywhere on the body of both recon and exploitation troops.
Pls remember that you are trying to apply advanced combat thinking and logic to a CSS unit.
I like carrying mags in get a way bags and also canteen covers.
I'll betcha a beer these soldiers were not geared up when they ran into the Iraqies.I'll go so far as to bet that their rifles were not at the ready.
jim

there is no ammo in this picture because I was about to get on a plane. We were issued ammo when we got in country.

A alot of what people are saying makes perfect sense but I also explain a lot of things in the book.

Finally, don't just criticize make it better, pass on all of your ideas to those who can make changes. I't can't get better till we say something

Shoshona,
Nice to hear from you and i'm in your corner, i'm criticising the system.
Are you saying that they took your magazines and ammo pouches away from you b/f you boarded the plane.
The fight that you are conducting has been a life long enterprise for yours truly.
I'm a life member of DAV/MOPH and do what a simple guy can do to talk about veterans issues. I hope that you link up with these organisations also.
I respect your life and experience but saw fit to use this story as an example.I've written about Lynch also , if you ck my archives.
I can't blow smoke to someone like you, so i can't really say that it gets better.I dwell on events that are 42 years old and they still eat my ass.
I will try to read your book-it's not at Borders yet.
jim