RANGER AGAINST WAR: No COLA For You <

No COLA For You 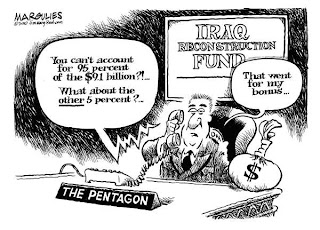 Since a politician never believes
what he says, he is quite surprised

to be taken at his word
--Charles De Gaulle

The story of postage hikes to take effect Jan. 2012 just reminds us of the imbalance in our current abysmal economic climate.

Fighting to survive a deepening financial crisis, the Postal Service said Tuesday it wants to increase the price of first-class stamps by 2 cents — to 46 cents — starting in January. Other postage costs would rise as well.

The price to send periodicals would go up about 8 percent, and other rates for advertising mail, parcels and services would rise by varying amounts. ... [P]ostage costs would rise an average of 5 percent (Stamp Prices Going up Again -- 46-cent Rate Asked).

The USPS is a microcosm of things to come. At our local postal station, waits can be upwards of 45 minutes, even during off-ours. This is due to staff reductions -- a cost-saving measure you see implemented at numerous businesses. Now, we get to pay more money for a reduction in services.

Meanwhile, Social Security recipients suffer no Cost of Living Adjustment (COLA) for 2010 or 2011. The story is, there is no inflation, even though the Consumer Price Index (CPI) rose 5.9 percent in fiscal year 2009 -- the index which COLA is usually tied to. This is the first time in 35 years there has been no COLA.

Sadly, the official line is belied every time one empties one's basket and runs one's good through checkout in the supermarket. But politicians don't engage in such quotidian tasks, so -- pity -- they don't understand the hits the average consumer feels on a daily basis.

Why does the USPS get, in effect, a COLA because they cannot make it, yet the fiction is imposed that a COLA is not needed by Social Security recipients?

posted by rangeragainstwar at 9:55 AM

I would be careful likening a government organization that enjoys pretty hardcore legal protection from competition to a privately run business. They have wildly different incentives, and aren't comparing apples to apples.

We all must make sacrifice for the greater good.

Except, of course, for the greater among us.

barca,
Why do i not get cola, BUT USPS can get a boost?
Why?
jim

Grant,
I'm not comparing the USPS to private business.
I'm comparing them to my sorry ass.
BTW-there's a police essay coming up on RAW.
jim

ranger, you're correct. how can anyone understand this as anything but fraudulent? you'd have to be simple or out of your damn mind.

If you want to see some really shocking COLA related figures find the average pay for laborers(NOT the national income average which includes ALL taxpayers) in 1981 and the average housing, food and clothing costs for that same year. Then compare it to today. There's a reason I often use the word Feudalism these days.

Anon,1030.
I believe the only reason that i catch this stuff is because i am simple.
Ranger simple.
It's the best way to look at things.
Complexity is beyond my perimeter.
I think i'll do a essay called-I am a child.
Thanks,
jim

Hey, ranger, it's lot's of fun to have you there.

Anon,
I'm more fun than a barrel of politicians.
Glad that you are on board.
I'd appreciate if you'd pick a moniker, as i like to get to know our readers. You can still be anon.
I actually learn a lot this way.
jim

It's got to do with which wheel is squeaking. Squeak louder!

Of course, SS as a whole is a giant insolvent pyramid scheme... I personally would like to keep my 15% now rather than be at the mercy of our wonderful politicians in my old age.

As for there being no inflation... If you use the economically correct definition (not BS things like the CPI which are loaded to make sure inflation is low) as an increase in the supply of money... Bernake is printing like mad, the banks have excess reserves, and we're gonna see some serious price hikes once everyone else figures it out.