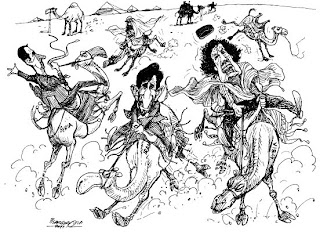 A democracy is nothing more than mob rule,
where fifty-one percent of the people
may take away the rights of the other forty-nine
--Thomas Jefferson
___________________

Watching U.S. policy floundering in the Middle East is like watching the obsessive-compulsive t.v. character Monk walking a sidewalk.

He knows there are cracks, but he assiduously avoids stepping on them, his arduous crack-avoiding walk allowing him to maintain a measure of equanimity. He would deny that he's making any accommodation for something that is driving him mad -- he would deny even seeing the cracks -- and so it is with U.S. foreign policy. The fictional Monk is OCD, but how do we diagnose U.S. policy, one as bizarre as Mr. Monk's strange denial and sidesteps?

Our leaders have been all atwitter about the upswell of mob action in Egypt, elevating mobocracy to democracy. This ignores the reality that mob rule should not / cannot be tolerated by any government, democratic, autocratic or otherwise. The U.S. has never tolerated mob rule, nor should we.

The streets of Washington were planned with crowd control in mind. The School of the Americas at Ft. Benning taught crowd control as a basic element of foreign Army training. U.S. mobile training teams worldwide taught the host nation forces how to control crowds. Here in the States, elite Airborne Infantry units have performed domestic crowd control, and the National Guard is well-versed in the topic.

So . . . why is the U.S. so optimistic about riots and mobs in the streets of Cairo? Further, was Obama's 2009 Hope - Change Cairo speech the match to this tinderbox (Dictators and Hedgehogs)? We are inconsistent: The U.S. heralds mobs in one place yet quashes them in another, forcing the residents to accept rulers they do not want.

How can the U.S. disingenuously press on with its counterinsurgency campaign in Afghanistan in the face of such hypocrisy? It spends trillions of dollars forcing people not to be insurgent, while sitting back on its haunches calling mobs elsewhere constellations of freedom fighting? Furthermore, isn't a mob a form of Low-Intensity Conflict (LIC)?

Will we allow Sadrist mobs to control Baghdad? No, so why can mobs overthrow a regime in Cairo but not in Baghdad? If U.S. policy is to empower mobs, then COIN should be abandoned as dead-in-the-water.

We need to think versus reacting in a Pollyannaish, vacuous Katie Couric moment. We do not know where Egypt will end up, nor do we know if the results will be constructive or democratic. Additionally, we do not know if democracy in Egypt will benefit the U.S. On the pragmatic side: What leader will cast his lot in with us when he knows he will be tossed to the wolves after he has done our bidding for 30 years?

One thing is certain: Democracy does not prosper in mobs.

posted by rangeragainstwar at 6:18 PM

Sheet, the gov't. can't even pacify & win over the hearts & "minds" of the tribal factions of D.C.in their own backyard.

Warning, this video is disturbing/graphic....

The same Egyptian military/power structure (minus a couple of Mubaraks) and the same US sourced income, plus performance bonuses, will be there. As usual J&L - you are right, especially about the gross hypocrisy.

Ranger,
Lest we all forget, a Boston 'mob' caused a 'shot that was heard around the world",that inspired millions of people to believe that moral courage could defeat an brutal, cold steel Empire that the 'sun never set on.'
For you to state: " that mob rule should not / cannot be tolerated by any government, democratic, autocratic or otherwise." is vexing. Your blog name belies your 'cold steel', Tiananman Square, logic. I DO, however, appreciate your uneasiness.....
I believe what we're seeing actually seeing is a tectonic historical cycle. The word 'Tectonic' comes from the Greek meaning 'carpenter' or 'builder'. I hope the carpenter or carpenters leaves the 'sword' at home. Are you fan of Bob Dylan ?

Is this a mob or a human being expressing a fundamental Truth ? A message from free Benghazi,Libya
http://www.youtube.com/watch?v=38EXALI60hg

Smart post admin but i think you need more explanation and more Pics
and I hope to visit my blog and subscribe to me :)
Ancient Egypt Clothing and Ancient Egypt Mummies