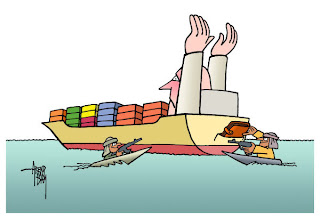 USA Today is always good for a glimpse into what the average American finds interesting.

Yesterday front and center it was pirates -- always a good topic (Killings Escalate Piracy Crisis). It seems two wealthy people and two friends were killed aboard their 65-foot custom made sloop by pirates as they blithely navigated through known treacherous territory as they romped their way across the world enjoying fair seas and spreading the word of their Christian God via distribution of bibles and occasional sermons.

Meanwhile, buried at the bottom of Page 5D was the story, "Children are Coming to School Hungry", about kids who, well, waited out the clock til lunch when they could fill their empty bellies. Said Stacey Frakes who taught middle school in Madison Co., Florida (neighboring county to Tallahassee), hungry children would lay their heads on their tables and "almost cry":

She says hungry students "couldn't focus at all. All they could think about was wanting food. They would ask, 'What time is lunch? Is it lunchtime yet?' "

It's hard to teach children when "they are thinking about their next good meal," Frakes says.


Pages 5A and 7A had something about the protests in Cairo and Libya, as that becomes background or foreground chatter like the U.S. wars, as sensational news like pirates dwindles or arises.

I don't know about you, but my concern is how to fix the manifold problems in my country. Proselytizing globetrotters don't mean a whit to me; if they volunteered at home to ameliorate some actual problem I'd give them a nod, but not for going out out converting and cavorting. The political goings on elsewhere are also not primary to my well-being, as they are not for most people.

Ah, but pirates, matey -- now there's something to fill a lunch hour's chatter. Exotic and much more interesting than the grotty little tales of woe of our downtrodden. Except when you realize that the pirates were once the grotty little hungry downtrodden of their own countries.

There is a repetition here.

The novel, the nude, and the grotesque; we hairless monkeys have always found these more compelling than mere kiddos. Who cares whether the kids get fed when there's something venereal on TV?

Or, and I suspect more to the point: building working societies is hard. Fucking hard. And boring - no sex and violence, no titillating tidbits, just grinding, thankless hard work.

So, pirates. Or Kardashians, scandals, sports, bread, and circuses...the news media know what sells. I'd call this "revolting but expected"...

Y'all,
Spent me last 4 decades working with youth and young people in a variety of schemes--from the local to the national to the state to my own backyard for the past 18.
FDChief's got it nailed--we really don't, in the main, give a rat's ass about the young--or the old either, but that's for another time.
Oh, if this were the world's largest blog, hundreds of bleeding heart liberals would now provide the mandated list of all the do -good, feel good, "programs" that are "provided" for our young, but I say put yo money,nay,yo time, where yo puckered mout is:
If we really cared we'd have kinder, more compassionate and generous national policies and practices regarding the lives and livelihood of our families--what used to be called a "decent living."
We'd have a serious debate and serious education reform that allows our young to learn, not to be programmed for a nonexistent job, or one that's been off-shored.

We'd cut the military budget to where it'd fit up my ass, and spend the money creating as they attempt to improve their lot--and that of our nation--by trying to learn.

We'd jail the rotten motherfuckers raking profit of the backs of our young, incumbering them with compounded debt for attneding college and trying to improve their lot--and the lot of this nation. What a smart way to make smarter people that one?

We'd give the kids--all the kids--good, healthy food food to eat while there.

Aww...Just preachin' to the choir here..Most of y'all now this..

Just returned from 5 weeks in Vietnam which mreminds me that maybe all of this isn't a governmental problem, or a commercial problem (tho it is an "internal contradiction"of a gogo capitalist scheme) anyhoo.

The Vietnamese people don't treat their children, nor their old, in this manner.
Maybe it's what we've become that's so disturbing..and saddening..and dangerous.

My daddy said once to me, after I started college and was on me way to becoming a liberal smartass:
"Son, you know what the problem with 'librals' is, don't you?"

(Here it comes , the old recon man was about to enlighten his boy)
"Naa, Pops, what's the problem with liberals?"

"Liberals can't say shit with a mouthful, that's what.
Hand me that saw."

The 'Clear and Present danger' are not pirates 6000 miles away in Somalia; but rather those of our Government, the multinational banks and corporations the military industrial complex that feeds the 'monster' we helped create. Trillions and trillions of dollars of wealth has vaporized; stolen from under the noses American people; to read the middle class and the poor. Who gets fingered Bernie Madoff's, the 'big unions', State government 'reckless spending', America's homegrown militia's our biggest threat ? Terror all around us, trust no one, report your neighbor, help make our Homeland Secure. The US Constitution and Bill of Rights, outdated in the 'age of terror'. I give my freedom, to you in exchange for my safety...

It seems the biggest heist in history was an inside job and USA Today is looking in Somalia for bad guys?
"A hard rain's gonna fall"
Dylan

Well-said Deryle, and well-said Anon.
I can add nothing.

The crimes are happening right here, with our complicity. Some may "protest" -- at the behest of our leader's rules -- within protest zones out of the public light. The rest are kept very busy establishing a cocoon of grudges against those who are "agin" them . . . all ginned up and unreasoned disgruntlement laid in from the crib forward.

It's hard to beat the system when you're playing by their rules.

Lady said to me one time: "Tell me how can we talk about conspiracy whrn we're all complicit?"

I coulldn't give her an answer as I was trying to put my fingers in my ears, which was difficult as I ws trying tto stick my head in the sand.
Some folks neve forgot that the fix is in.

Your daddy was right about the liberals. Same as with the conservatives. The real problem is what we've become: dispassionate, all about me, no sense of cohesion.

Yeats was right when he predicted the center will fall apart and things will not hold.