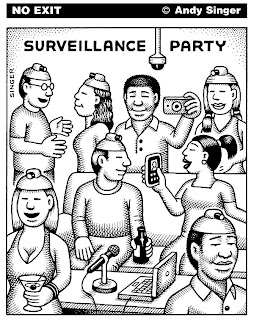 The strategic adversary is fascism...

the fascism in us all, in our heads
and in our everyday behavior,
the fascism that causes us to love power,
to desire the very thing that dominates and exploits us
--Michel Foucault

There was of course no way of knowing
whether you were being watched at any given moment.
How often, or on what system, the Thought Police
plugged in on any individual wire was guesswork
--1984, George Orwell

Ranger has commented before on the presumption of guilt that comes with a technological accuser seen as infallible. As a increased source of revenue for the state, the use of the cameras is a no-brainer. But they disallow the accused the benefit of facing her accuser in a court of law. It is as a juvenile friend says when caught like the proverbial cat with the bird in his mouth: "BUSTED!" But should it be thus?

While one has no expectation of privacy in a vehicle on a public highway, one has in the past had the right to face the witness to his transgression in a court of law: The policeman who wrote the ticket. No matter how indignant the ticketee, it is recognized that the cop is not a thing. However, the policeman's role is now co-opted by a thing, and since this is so, has the technology now gained a measure of "personhood"?

Are we entering the age of the Borg, and if so, what is the endpoint? Will no area of our lives be sancrosanct? The average Briton is photographed approximately 200 times in the average day (the British publication Philosophy Now! devoted an entire issue to the topic.) How does the knowledge of this constant surveillance affect the human psyche? Will we become so inured/submissive that we will not mind this evisceration of our bedrock right to face our accusers? Will we come to love Big Brother?

The red light cameras are said to increase safety at intersections. It is the Santa Claus/God effect: He knows when you've been bad or good, and you have no idea when he is actually watching? If safety is the concern -- as it seems to be the all-consuming God of modern America -- are there not other ways to affect this in a matter more in concert with democratic principles?

Would increasing the yellow light cycle reduce light running? Increased penalties and increased sentences for injuries caused by light-running? In addition to the alternative approaches to the problem, we fail to consider that we are made unsafe on the roads due to inconsiderate and selfish behaviors such as cell phone use, texting, eating, being distracted or overly aggressive or simply failing to use signaling devices.

With more "infallible" intrusions we grow like Patrick McGoohan's Prisoner, dwelling in a world of shrunken perimeters. Will we welcome a statewide version of Bentham's prison Panopticon, or like Foucault, will see the limitation and limiting factors of such a Big Brother overwatch?

In Nick Parks' classic animal claymation of life in a zoo, Creature Comforts, a nearsighted sloth with Mr. McGoo glasses says, "I feel secure I'm not worried about anything . . . I know what ever happens they'll look after me and put me where I ought to be." Or will we be the disgruntled Latin lion who protests against his safe, nutritionally adequate but soul-zapping "dog food" diet: "I need meat; I need a-space. I'll go anywhere -- name it, I'll go".

Ah yes, the last refuge of the uber-Statist: traffic control. Its amazing when empirical science blows massive gaping holes in the lie that red-lights and cameras save lives. Its all hogwash. They are there for 2 purposes: to reinforce Obedience and to turn a profit for The State.

"TAMPA - Cameras at intersections increase, not decrease, accidents, according to a University of South Florida study published the day after Hillsborough County commissioners voted to allow the cameras at 10 intersections."

"Traffic planners in the Dutch town of Drachten are conducting an experiment which has seen nearly all the traffic lights removed from the streets!

The idea behind the project known as "Shared Space", is that taking away the lights makes motorists take more care at intersections as they are aware of the greater dangers! It is said that this idea helps motorists, cyclists and pedestrians to co-exist more happily and safely."

I think is a great idea but not here in Amerika. People with $$$$ would only build bigger cars and trucks to run over us that respect the law.

I’ve reading about this for a while and this is how far they will go. There’s no end to the will to control the citizens of this nation and others. Sad
http://www.salon.com/news/opinion/glenn_greenwald/2011/02/11/campaigns/index.html

Won't make much difference; inside of a year or two only the rich will be able to afford to have and operate a car.
'Course if the cameras have a wide-angle view, they'll be able to see other things besides traffic.

Since we're in the mood for links. If any of you folks have a penchant for metal..

Written several years before ECHELON in the Clinton years and the Patriot Act.

Plunging into a new found
Age of advanced observeillance
A world-wide, foolproof cage
Privacy and intimacy as we know it
Will be a memory
To those who never knew