RANGER AGAINST WAR: Sands of Time < 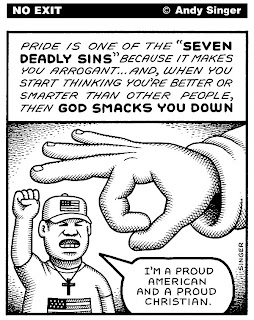 My name is Ozymandias, king of kings:

Look on my works, ye Mighty, and despair!”
Nothing beside remains. Round the decay
Of that colossal wreck, boundless and bare
The lone and level sands stretch far away.
--Ozymandias, Percy Bysshe Shelley

Pride goeth before destruction,
and an haughty spirit before a fall
-- Proverbs 16:18

I remember reading that scientists once believed
the universe was made of hydrogen,
because it was the most plentiful ingredient found.
If that theory holds any truth,
then I believe it to be made of stupidity
--Frank Zappa
_________________
Ranger is only now getting around to Steve Coll's Ghost Wars: The Secret History of the CIA, Afghanistan and Bin Laden, from the Soviet Invasion to September 10, 2001 (2004) is a tour de force of Afghanistan, one war removed.

For anyone still four-square behind this little dust up, Mr. Coll will disabuse you from any patriotic notions of victory in that nation of shifting alliances and canny self-sufficiency. It is not an easy read, but once done the idea of a nation-state in our image is forever gone, and the ability of the Afghans to look out for the Afghans in the face of any intervention is firmly established.

Take one Mr. President Hamid Karzai and family, he of the sweeping silk cape, yak cap and Western business suit, rolled out the American people as an exotic but friendly ally:


The comments on Karzai show an opportunistic man constantly shifting alliances like the desert sand to consolidate power; as in 1994, so in 2011. His true loyalty and beliefs are safe under his yak cap, but they probably do not parallel U.S. interests. Not only are Mr. Karzai's actions wily as well as those of his Afghani brothers, but Pakistan's ISI plays U.S. operatives like a fiddle.

U.S. clandestine operations in the Russo-Afghan war were completely orchestrated through the Pakistani ISI. At no time did U.S. agents directly coordinate or recruit agents at a meaningful level. In effect, the allies of the ISI were funded and equipped by U.S. taxpayers. The ISI and Afghan resistance co-opted the entire war by transforming the effort into a religious endeavor, relegating the nationalists (as such) and monarchists to untenable positions.

U.S. policy became entwined with ISI policy, and U.S. agencies never questioned the empowerment of the Islamic fundamentalists. In fact, the anti-aircraft shoulder-fired weapon buy-back following the withdrawal of the USSR is accepted as the financial basis of the early Taliban successes in the post-war era (post-war may be a redundancy as more of Afghanistan's history has been in that state than not.)

The Central Intelligence agency bought back weapons which we had freely delivered to the Afghan resistance through the ISI. The Afghanis then funded themselves by selling them back, the Arab goniff reminiscent of the cartoon characters who would drop a coin into the vending machine, tied to a string, getting both the goody and the coin.

Large weapons caches and tunnel systems were also funded by the U.S. and built by Arabs like UBL throughout this era. These caves were later (and still) used by the groups opposing the current government and subsequent U.S. occupation -- in counterinsurgency terms, the perfect self-licking ice-cream cone.

As an old saying goes, an Arab can steal the yolk from egg without cracking it. We are just accepting that there are different kinds of intelligence. The U.S. may have the baddest technology on the block, but they sure seem to play their cards more ably than any we try to place on the table.

posted by rangeragainstwar at 3:33 PM

Rand Analyst of Pentagon Papers fame Dan Ellsberg tried in vain to get the Pentagon to translate the French books about their century long occupation and subsequent loss of Vietnam. The reasoning behind the resistance was of course because the French were "neocolonialists" and unlike them, we had the helicopters. Never mind the literature contained the exact locations of where the Vietnimh and later the Vietcong was concentrated. Not that the U.S. command in Saigon didn't figure this out on their own, they just felt they needed to figure that out the hard way.

Enter Afghanistan, where mountainous terrain even more conducive to guerrilla warfare than tropical jungles and an eternal "sanctuary" already precluded any possibility for a victory satisfactory for any occupying foreign expeditionary force. Not only do you have NATO forces making the same mistakes as the Soviets but with the case of auctioning off logistics to warlords who may or may not be allied with the Taliban, making new ones entirely, all stemming from the same problem. In the 1980s or 1990s a historian wrote "Bear Went over the Mountain: Soviet Combat Tactics in Afghanistan" a well researched American tome that was almost unknown even in American military circles but ironically picked up by Russian ones. Well, after a tour in Helmand ,on a whim, an officer with the 2nd Battlion 7th Marines decided to check out the graphic overlays of this book and compare and contrast. Astonishingly, down to the geographical features, the Marines were attacked in the exact same way the 40th Red Guards Army was attacked in the region.

Then again, the Vietnamese could wish for a situation like Afghanistan where the Pashtuns, the primary group fighting occupiers in the country for the last two centuries don't really possess a sanctuary or an indestructible supply line as much as they have an imperial blunder they still use to their advantage hundreds of years old. The Imperial British 30,000 strong combined with the first close-air support in history could not pacify the Peshawar region which now makes up the Pakistani tribal areas. This might have to do with the fact that the area is as Pashtun as Afghanistan and only arbitrary lines on a map seperate this reality, created after a disastrous Royal campaigns in the region. The NATO occupation have it easy, infact, as three-fiths of what is essentially a "Pashtunistan" that straddles this line is in Pakistan, not Afghanistan. And the force that is tasked with fighting bigger side of the Pashtun homeland? The third-world Muslim country that that this Pashtunistan is apparently part of.

IMHO, it isn't the Graveyard of Empires because of the graveyard.

NL,
In SFOC 1970, before i went to VN we were req'd to read all of Bernard Falls tomes. In addition we read the fictional accounts of Jean- Claude Lauterguy which were incredibly reflective of the corruption of colonial war and administration.
I re-read these about 20 yrs ago and enjoyed the hell out of them. Only the names and dates varied, but the story was the same.
My camp was a Jap Airfield ammo dump in WW2 and a French garrison in the Fr/Indochine war. It served as a fighting site in 3 colonial wars. In AFGH the caves and tunnels share the same history. IMO that's why the locus is the same.
In the battle of Khe Sahn the locals offered to show the Marines the caves being occupied by the NVA and the offer was declined b/c we didn't trust the people that we were there to defend.
jim