RANGER AGAINST WAR: Virtually Yours < 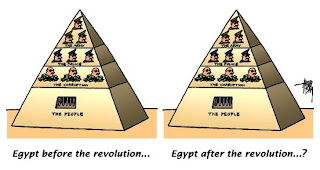 Fighting with the shadows in your head
Living up the same old moment
Knowing you'd be better off instead,
If you could only . . .
Say what you need to say [8x]
--Say, John Mayer

Express yourself
[You've got to make him]
So you can respect yourself
Hey, hey, hey!
--Express Yourself, Madonna

The recent protests in Egypt have many pundits glowing about the potential of social networking platforms like Facebook and YouTube to foment change. The NYT suggests they offered a way for the "discontented to organize and mobilize" around a cause like that of Khalid Said, murdered by police because he supposedly uncovered instances of police corruption (Movement Began With Outrage and a Facebook Page That Gave It an Outlet).

But in order for such networking to manifest in actual social unrest requires waves of disenchanted, a phenomenon that may not resonate with ubiquitous cheap Chinese goods, nachos and wide screens and enough money to pay for a ticket to be distracted by the latest Hollywood drivel at the local multiplex.

Contemplating what a 21st century American protest might look like, I was brought to mind of a new viewing experience held recently in Miami: Wallcast. Wallcast is a 7,000 square-foot outdoor screen onto which was projected a Wagner opera for the viewing pleasure of the outdoor masses who could not score a ticket into the theatre (New World Symphony in Miami Beach).

The sounds was praised, as 167 speakers were unobtrusively placed behind plants surrounding the outdoor setting, "tucked neatly into a rectangular network of horizontal and vertical tubes. It looks more like an enormous tubular sculpture than an array of speakers." (Terry Gillam's Brazil, anyone?) "[T]he orchestra came through with remarkable presence, body and clarity. Sitting in the park watching the broadcast you do not detect the music coming from any particular set of speakers. Rather, it permeates the space."

And the cameramen were innovative in their use of side and overhead shots, giving the screen viewers a sensation of actually being at the performance (if one is willing to assume the perspective of the innovative cameramen and resist vertigo.) Wallcast may well be a spectre of things to come.

Our protesters may one day arrive, but they will be cordoned off from any meaningful confrontation, instead confronted by a giant wall screen onto which is projected the figures of our leaders gazing out, mutely, upon the rabble. We will have had our say, and it will feel real because for us, it was.

We will have organized, recruited and we will be tired, having paid for our transport and hotel rooms, and we will have schmoozed with our fellows and duly documented the experience on Facebook and Twitter.

If a tweet is chirped in the woods, is it heard?

And then, the screen will go dark.

I personally think the elites in our nation are scared sh!tless about the potential of Facebook and YouTube. Why else would they have been pushing laws to make it a felony to film a cop? The douchebags in blue (sorry, I have no use whatsoever for them, mea culpa...maxima mea culpa) don't like it when they beat the crap out of someone (or murder them) and it goes on YouTube. The cellphone camera is the best weapon in the arsenal of those who want to affect change in our society.

Cops have both helped me and hindered me, so I have no one view on the matter.

A picture has always been worth a 1,000 words; the question remains: What do we do when presented with that picture?

That is the $64 million dollar question. At what point will we, as a society, reach the-point-of-no-return? What will be the tipping point that causes it to all come crashing down? If I were a betting man, I truly think a situation like what happened in Tunisia and spread to Egypt will happen here: some poor bastard will get beaten to a pulp and a protest will happen. The powers-that-be will overreact and it will feed upon itself. I can only base it on my instincts, but just like battles that turn out 'significant' always seem to be small in the beginning (Gettysburg, for example), so it is with society shattering events. We may not even recognize it until the event is so far along that there is no stopping it.

I hate to sound gloomey and doomey, but...well...I just cannot see a truly happy ending for our society. Question is in 2012 will we have a Diocletian or a Justinian? Diocletian, scumbag that he was, at least staved off the collapse of the Roman Empire for a full century by restoring the value of the Aureus. People may ask what that hell has to do with us and, truth is, it has everything to do with us. Inflation that will make your eyes bleed has already started (warned by the USDA) in commodities which will drive up prices for food. There is only so much companies can cut sizes/packaging to keep prices stable for food.

Like you, I wonder whence the tipping point. Like you say, packages can only grow so small before the prices will rise.

My formerly $3.50 a package bacon was $6.89 this week. Almost a 100% increase in a couple of weeks. Butter? $7 a 4-pk, if you want a good quality. I guess people will substitute long as they can with butter "spreads", and the health care behemoth will be glad to handle their resultant health woes ...

I'm not generally a conspiracy thinker, but this simply seems obvious to me. Speaking with my European doctor last week, he sees it, too -- the collaboration of Big Pharma and pesticides and Big Agra.

Its a host of things, really. It does come back to the incestuous relationship our government (at every level) has with Corporations. Inflation is directly attributable to the actions of our Central Bank (The Federal Reserve) pumping almost 4 trillion dollars into our economy since before George W. Bush left office. The dollar, as it exists now, is worth aprox. $0.02 cents to the 1913 dollar in purchasing power.

I always hear morons (Keynesian, Neo-Keynesian/Chicago School/Monetarists) screaming that deflation would kill people at the bottom. Funny, I thought having a loaf of bread cost $400 is what plows under the lower-classes. Sure, it would suck to only make $7/hr (average now is $9), but it would be a godd@mn site better if gasoline only cost $1 a gallon, bread was $0.70 cents a loaf and so forth. Housing was the first thing to jack through the roof (and it has now collapsed, but the douchebags in Washington keep trying to re-inflate the bubble) making it to where the poor and most of the middle-class can no longer afford to own a home. Next its energy. Get ready for $5 a gallon gas possibly by the end of 2011.

As much as I'm not a fan of Ayn Rand (despite the blatherings of idiots who don't know any better), its fascinating, in an awful way, to see how she predicted our very crisis now in Atlas Shrugged. I despise her for being a Corporate and US Government Apologist.

No doubt $5/gal petrol is coming; it's all a game.

The neocons who espouse Rand are such a mean lot, by and large, and do not realize that our government is run on entitlements, top to bottom. Remove them in the mean fashion they propose, and society collapses under the weight of corruption and decay.

See that's another thing. People talk about Ron Paul as if he wants to chop people off at the knees when its clear he doesn't. He even said that if we closed down our Empire, we could better spend that money HERE! He said he wants to gradually phase things out but that will result in money given to Charity and the re-emergence of Mutual Aid Societies. He has repeatedly stated that he wants interim programs to help people who have become dependent upon the government.

Its amazing how little charity exists now, though that is now changing because of the economic disaster we're in. I've been homeless before and I know that the more localities crack down on people, the worse it gets. They're set to make it illegal to 'panhandle' in Tampa as was done in Pinellas County. Its the idea of 'out of sight, out of mind' so the politicians can claim that there is no homeless problem.

But there is some hope, there is even an emerging sector on the Internet to help people in a tight spot: Chipin.com.