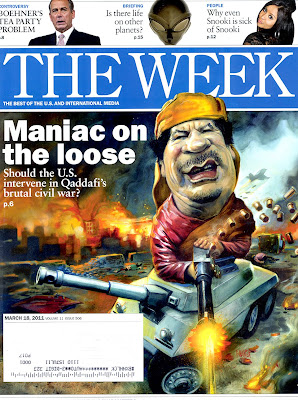 All the world's a stage,
And all the men and women merely players:
They have their exits and their entrances;
And one man in his time plays many parts
--As You Like It, Shakespeare

In bitter defiance
she's spitting the corps
she's wet a brood short league for combat
my mother the war
Well acquainted with sorrow,
well with grief
--My Mother the War, 10,000 Maniacs
__________________
Yellow journalism is alive and well, and MSM is a willing tool for politicians to incite the masses.

Witness The Week cover featuring Muammer Qaddafi as a maniac on the loose, his keffiyah fashioned into sort of a baseball cap turned backwards, making the sparsely-mustaschioed Qaddafi look like a renegade punk in a Tonka truck (with Latino overtones.)

The thing is, while Muammer has always been a maniac, he is not on the loose -- he IS exercising his sovereign right to deal with rebels in a civil war. Is this not exactly what Abraham Lincoln and the U.S. Army did in the U.S. Civil War? Did we not rain brutality down upon the rebels?

Bringing U.S. actions up to today, our Counterinsurgency policy (COIN) has established two new governments following our invasions which resulted in Civil Wars. The U.S. response was to brutally suppress the rebels in both countries -- so how does the U.S. condemn Qaddafi for exercising his own legitimate response to quell an uprising?

Muammer Qaddafi is in his own country and not rampaging half a world away. Even were there 2,000 rebel deaths, this is irrelevant when weighing Qaddafi's against U.S. campaigns in Iraq and Afghanistan, campaigns far more brutal and lacking in legitimacy.

If Qaddafi is a madman for seeking to suppress a rebellion, then we must apply the same descriptor to U.S. presidents. At least Muammer Qadaffi is contained, while U.S. powers roams the world like a hungry beast.

U.S. policy in the Middle East reminds Ranger of the Southern saying, "When you yell "fart", everyone comes running to get a whiff." We run to the fart every time one is loosed anywhere in the region. That's not being a smart feller, as Dad would say, but a fart smeller.

Why does the U.S. concern itself with every scenario blossoming on the world's stage while ignoring the stark realities within our own borders? I do not care if Libyans are killing Libyans or if the Shias or Sunnis rule Iraq. What need I care who rules Afghanistan since all of these problem areas are far from my hometown?

Let these countries fight their own Civil Wars as we did, the chips falling where they may. We fought a Civil War without a No-Fly zone.

Simply, the U.S. should not be in the Civil War business. COIN and Civil War are sides of the same coin.

posted by rangeragainstwar at 6:40 PM

Jim - once again you nailed it. Seen this? http://globalresearch.ca/index.php?context=va&aid=23660 Oil. Vast quantities of oil/gas/metals soon to be in control of US/UK/Euro company interests. Our "elected" officials are nothing more than hypocritical hollow front men dancing the puppet 2-step for the mega corporations. They're frothing at the mouth to get their blood soaked hands on yet more profits. Why is it still called department of defense? Dept of Attack..hmm DOA.

DOA -- that does have an ominous finality to it, no? I saw a political cartoon in the foreign press which showed Lady Liberty's white robes tinged with blood. I hope we may maintain one branch which remains true.

Carl,
Just for giggles google Carlyle group and Khadaffi.
See what you get.
jim

Imperial powers have often picked sides in civil wars (see: Spanish Civil War). If there was a clear advantage to the U.S. in picking a side in this one - especially picking the rebel side - I'd say there's a case to be made there.

But I don't see it. The petroleum is sold mostly to Europe. So if the EU wants to intervene, more power to 'em.

We just don't have a dog in this fight, dawg.

Of course, good American historians will remember the Department Of Defence, as early as fifty years ago, was actually named appopriately before it "evolved" as Wikipedia reminds us.

Well, you note that Obama & Co. listened to Wolfowitz rather than to you, the more fools they.

http://www.veteranstoday.com/2011/03/03/gordon-duff-israel-intervenes-in-libya-for-gaddafi
I guess that about says it all..Does anyone care anymore?