RANGER AGAINST WAR: Winners and Losers < 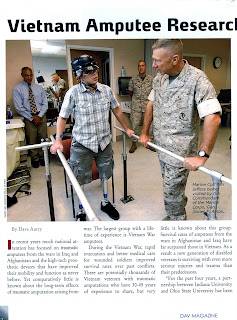 This picture from the March/April 2011 DAV Magazine shows USMC Cpl. Tim Jeffers being visited by the Commandant of the Marine Corps, Gen. James F. Amos. The article is on the long-term effects of traumatic amputation resulting from war.

Ranger was affected negatively by the photo as it forces him into the position of that of the collective crazies picketing military funerals. How can any sane patriotic American say anything negative. It is outre to criticize the dead military personnel or those broken beyond any useful functions. But that is not what this is about.

This photo shows two strong Marines in clean, straight up uniforms in a sterile, emotionless room talking to a remnant of a former Marine, the helmet on the corporal's head telling the entire story to include the prosthetic legs. The strange part of such photo ops is that the editors think somehow that this will be uplifting, to which Ranger says, bollocks.

Why do we continue to sacrifice fine young troopers like Cpl. Jeffers? He is too valuable an asset to waste; why does the DAV Magazine and other sources continue to portray these needless wounds as a patriotic endeavor when it is actually an exercise in futility?

It seems ghoulish to even comment on such a photo, but it evokes too many visits to cold and sterile DVA hospitals and wards. The broken Marine is a commodity, easily discarded after his usefulness as a photo prop. Will his Company, Battalion or Brigade Commanders ever visit him in the future, or will he sit in a lonely VFW or American Legion bar on weeknights remembering what he was before the event that made him what he isn't? Let's get real: Will his old Platoon leader even visit him after he is discarded?

Let us go a step farther, and consider the wounds beyond the loss of limbs. What damage has been inflicted upon his brain? A blast that rearranges body parts also rearranges the functions of a brain. There is more to a photo than pixels.

Ranger wishes the best to Cpl. Jeffers and nothing that I say diminishes his valor, nor has it been our intention to belittle his sacrifice. The comments are about us rather than him, since we all bear responsibility for his damage.

The eagle has left the building.

posted by rangeragainstwar at 12:46 PM

This post has nagged at me for a few days now. I wince whenever someone talks about making a sacrifice for "our country". Beyond the implication of collective guilt, these poor wounded souls did nothing for "country". They risked, and lost, for politicians who needlessly ordered them to go to other countries and kill strangers.

the surrender or destruction of something prized or desirable for the sake of something considered as having a higher or more pressing claim.

I would never consider a politician to have a "higher or more pressing claim" on my life than I do.

Your inclusion of the def. of "sacrifice" is most apt.

There is no gain here of higher worth; not at all.

When I hear something like that happens. I can't help myself feeling sad. It really triggers us when some soldiers really risk their lives for the sake of our "country" as they say. And probably when we sees our politicians only 1 out of 20's is really devoted to our country that sometimes all the sacrifices been made is wasted. :'(

Nice post which his photo shows two strong Marines in clean, straight up uniforms in a sterile, emotionless room talking to a remnant of a former Marine, the helmet on the corporal's head telling the entire story to include the prosthetic legs. The strange part of such photo ops is that the editors think somehow that this will be uplifting, to which Ranger says, bollocks. Thanks a lot for posting this article.