RANGER AGAINST WAR: No Friendly Skies for You! <

No Friendly Skies for You! 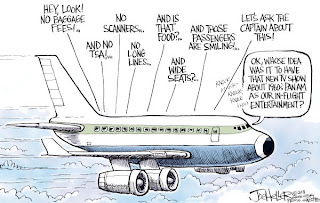 See how they run like pigs from a gun,
see how they fly
I'm crying
--I am the Walrus, The Beatles

I never expected, Perry, to see you
reduced down from a full-grown pestilence
to such a frivolous fraction of a man
--The Lonesome Road, O. Henry

Blackbird singing in the dead of night
Take these broken wings and learn to fly
You were only waiting
for this moment to arise
--Blackbird, The Beatles
__________________
Ranger has always predicted that one of the more insidious results of the 2001 World Trade Center attacks would be the possibility of the U.S. government shooting down suspect civilian aircraft justified by the miasma of fear which has become our current psychological climate.

The best thing a terrorist group could achieve would be to force the U.S. to do its dirty work by reactively shooting down one of its own commercial airliners. Such a visible show of disregard would surely cause the traveling public to give pause.

Frontier Flight 623 carrying 116 passengers and crew was recently shadowed by two fighter jets until it made its landing in Detroit -- why were these jets on-station? They are useless in civilian skies for any task other than shooting Flight 623 out of the sky. The scenario seems to confirm the hypothesis that U.S. policymakers will shoot down distressed U.S. airliners (Military Jets Safely Escort NYC, Detroit Flights).

The whole hopey-changy thing has not worked out well. People are losing faith in the economy underpinning this fiasco, and they're neither buying nor investing. The economy remains grounded on the tarmac. How much worse if people remained static out of fear for their bodily safety -- a self-imposed rigor mortis in a flat-lined economic state?

Think about it: Dying on a flight to Detroit -- now that's some terrorism.

Given the current NATO-led debacle in North Africa. Homeland Security may be hoping that's the worst of our problems.