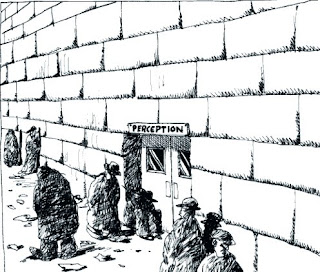 --Loitering at the Doors of Perception,
B. Kliban

Maybe this world is another planet's Hell
--Aldous Huxley

As the present now
Will later be past
The order is
Rapidly fadin'
--The Times They Are a Changin',
Bob Dylan

I'm just trying to be honest
about being a misanthrope
--Dazed and Confused (2003)
_____________________
Knocking around in the far recesses of Ranger's mind is the minor indignity suffered at his alma mater this summer.

While in Bowling Green, Ohio, we decided to contact the school paper just for grins, to volunteer for an interview as the RangerAgainstWar, a Distinguished Military Grad of the BGSU ROTC Program, award-winning Progressive blog writer extraordinaire. Well, the offer went over like a led zeppelin -- the editorial staff had no time for his anti-war stance. What a difference a day makes.

In 1968, the Bowling Green campus was a hotbed of anti-war sentiment, and the ROTC cadets were taunted as ROTZ Nazis. Ranger and his ROTC buddies tried never to wear uniforms to class as we were ridiculed by the Students for a Democratic Society (SDS) instructors. We would schedule our classes so as to allow an hour before ROTC classes to change into uniform. People would throw trash at us when we would hold our annual review.

Fast-forward to 2011, and the last commencement speaker was a Staff Sergeant E-6 Air Force Active Duty type. Back in June '68 when Ranger was commissioned, Medal of Honor recipient Lew Millet conducted the ceremony, and nobody besides us cadets were even aware of his presence on campus. Now the campus reveres an E-6 AF dude.

How did we get here from there? Why do we not object to our Phony Wars on Terror (PWOTs ©)? Why is a low-ranking enlisted man elevated to commencement speaker and an anti-war advocate ignored? It seems Ranger is out of time, out of place, a stranger in a strange land.

When a formerly liberal college is not even interested in "fair and balanced", we are traversing strange terrain.

I took a semester of ROTC at the U of Nebraska, Lincoln, ( instead of PE ) where they partially burnt down the headquarters bldg ( 1969? ). I haven't been back there in years, so I can't report on the tenor of current students there.

I can still march and do an about face pretty good.

Hey you know, it coulda been worse. You coulda stopped over at the Citadel where Mittens got lotsa applause for telling the kids that Obama is a wimp.

I do say I appreciate that this generation learned key lessons from that era, namely that soldiers. especially groundpounders do not deserve rage and derision for being hoodwinked into fighting unjust wars.

But vis a vis the newly-named "overseas contingency operations", I can't help but notice the marketing of these particular wars, the baseless lies of much of the Mainstream Media, the repackaging of government sycophantic regurgitation as news.

Scholastically speaking, ask Micheal Parenti, Norman Finkelstein and Thadeus Russel about the job security of being one of those pinko overpaid professors. If that myth was true then, it isn't now.

And of course, when you don't have the luxury, of a certain old Communist homeland, to call a war not a war, and openly oppress those who do. End the "national service." The British and Roman Empires wised up to this quickly, The Powers That Be are the latest to figure this out. I've heard that cynical argument that without the draft, there would of been no anti-war movement...

After finding out how many Americans "follow closely" (i.e. actually know whats going on over there), I concede.

Apparently, the ruling class has learned a few things too.

NL,
If 1 reads the Army Times, and i do there are a few clouds on the horizon.
The Army MUST reduce 52000 slots soon, and who will be the first to go?
Let me guess-THE WARRIORS. The paper pushers never get OBE'd/rif'd.
Neither do the West Point grads.
I believe as a former draft era soldier that the end of the draft DID knell the death toll of anti-war activity.
jim

Interesting; I was having some thoughts along those lines myself:

Chief,
I have been sent to siberia, figuratively speaking.
The ROTC Alumni Assoc. never sends me any news ltrs, which means that the chicken shit fuckers have not placed my name on their roster.
The irony is that i was the only person in my class to go INFY by choice.
Chicken shit never ends.
jim

My name is Ian Zulick and I am a student at Bowling Green State University. I wanted to tell you how pleased I am that they printed your article. I think the reason that we now idolize anyone in the military is because the media, has rendered the dangerous image of "God and Country" and the American people have largely eaten it up and asked for seconds.

My father served in the Marines in the early 70s, and as he's probably just slightly younger than you, we've had this conversation many times. As he's told me, and as you have written, the world has changed a lot since 1968. Our society, though becoming more tolerant in some ways has become unbelievably, and some would argue incontrovertibly violent in others.

As a young man, I saw recruiters in my high school all four years I attended it, I see the the violent videogames people my age play; and while I have no qualms about playing them myself, I am under no illusions about how such a thing could function as military propaganda to a young, impressionable mind.

We have become too complacent as a people, and all too often we opt to let the powers that be make the decisions and turn a blind eye rather than giving a damn about the consequences. The military-industrial complex is obviously a huge factor in how and why war occurs, but such a thing can only exist when the people's typical passion for social justice is blinded by the rage our government is channeling from their poor decisions into a foreign enemy that is now little more than a ghost. The military is far too close to the government for my liking.

No one really protests anymore because people my age choose to be uninformed, frankly. And if these people my age; my peers; our nation's youth have already succumbed to a myopic trust in the military, I weep for our future. But people like you give me hope that we can change things. Thank you!