RANGER AGAINST WAR: Son of a Gun <

Son of a Gun 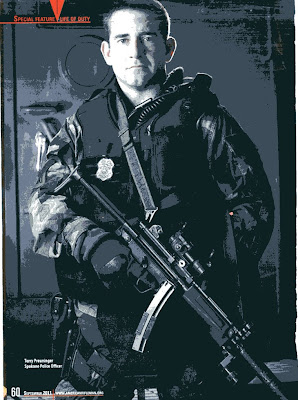 Ranger's updated stanza of America:
My country 'tis of thee
sweet land of give to me

The photo accompanying the Special Feature Life of Duty shows Spokane Police Officer Terry Preuninger, a good German name for a dude rigged out with a German-made sub machine gun. Notice the sap gloves -- does the name "Officer Friendly" pop into mind? Why are the American people o.k. with Ninja turtles posing as law enforcement officers?

The NRA is pushing a schizophrenic platform. On the one hand, guns for all, in case insurrection becomes necessary; On the other, a militarized police force which would render such an eventuality null and void. Fear is the operative watchword in both, conflicting, scenarios. But hey, we the public are accustomed to subsuming inconsistent messages.

The NRA packs its membership rosters with people high on Jefferson's "blood of patriots" comments. They forget that Jeffersonian democracy is as demode as the flintlock rifle that we would have to pry out of Charleton Heston's cold, dead fingers. These saps are then taught to revere the example of guys like Officer Preuninger, without realizing that his example is the antithesis of the free, gun-toting citizen which the NRA peddles; he is the one you would aim to overthrow! The paramilitary police does not favor overthrowing any institution.

The NRA sells fear while supporting the entrenched state apparatus of paramilitary power. It is a duplicitous message packaged for a non-discerning public. While the NRA is a non-profit organization, it makes millionaires out of its top executives -- are these guys anything but government, or big business or Republic party shills? The top NRA execs earn more than the President, Vice President and Secretary of Defense . . . selling fear is Big Business.

Would they revolt against a repressive government? Would they take to the firing line if gun ownership were outright banned? The NRA machers are consummate insider Republican right-wingers pretending to defend the common man. They poseurs in a grand charade.

Either you are or you aren't -- you can't be both. The NRA fails the consistency test.

posted by rangeragainstwar at 4:50 PM

to all,
looking at this pic today i noticed 2 things.
-the badge is not over his heart and
-he's not clearly id'd as a cop from the front. If his weapon is shouldered then the badge is covered up.
Would you shoot if he busted thru your door serving a no knock warrant to the wrong address???!!??
jim