RANGER AGAINST WAR: A Burning Question <

A salute to all veterans of World War II on this day that will live in infamy. We haven't a proper memorial post, so we will take a tangential detour.  Today we will talk of toasters.

As prelude, Lisa has a great love for functional things well-constructed, things that abide. Arctic Air oscillating fans, heavy irons and ... toasters.  While not possessed of objektophilie and really a minimalist, she likes her few possessions to be of quality.

Her '52 Toastmaster went on the fritz recently and as one cannot find a really decent, stylish toaster for under a buck twenty five (maybe a Russell Hobbs glass toaster but you can't find them stateside at the moment), the solution was to turn to the world's bazaar: eBay.

Surprisingly, there were a slew of toasters from the 1946-52 range from now-defunct manufacturers: Armaid, Camfield, Arvin, Kwikway, Knapp-Monarch, Fostoria, Walter Genter, Nesco, Heatmaster, Manning Bowman, Landers Flary and Clark, McGraw, Son Chief, Rutenber Electric, Royal Rochester, A Mecky, Marion, Chicago Flexible Shaft, and on it went. Sharp, architectural, stylish -- not silly gizmos, staunch little machines that got the job done, just like her Osterizer beehive with the "On-Off" switch (does one really need to "frappe"?)

These machines are still running great, 60+ years on.  What toaster today will be able to claim that?  Planned obsolescence is the polite name for what happens to the junk we now buy from China. 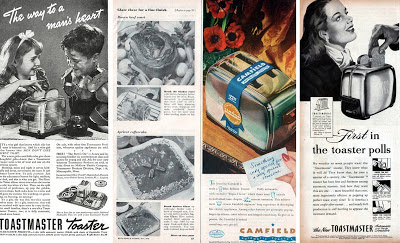 The toaster was a foundational item of the early-mid 20th century kitchen, and like many machines that kept a household running smoothly, it was valued.  It was a suggested Christmas gift for the wife who wished to set a table "with aplomb"; it would be used to prepare breakfast for "Uncle George" who boldly invites himself over.  The wife in the advert gazes lovingly at the shiny object; June brides were given dibs on production that could hardly meet demand.  One company offered a $2 trade-in off of new models. In one frisky ad, the man pulls the toast out of the slot, disburdening her of the chore.

There were toaster charms, Barbie starter toasters and oddly, toast salt and pepper shakers.  There is even a book celebrating the art of the toaster (1909-1960).  They were decorated with etchings of the Zephyr wind, wheat, daisies and World's Fair logos.  But with the advent of the 60's, we have the loss of the graceful toaster.  It becomes a box, shorn of its etching and cantileverous lines.  The chrome recedes, giving way to plastic (one can't even kid herself that it is Bakelite anymore, the darling of every Fiesta-loving mama.)

Avocado plastic has been re-purposed as the stylish "sage" in today's ads; puke yellow now becomes the palatable "butter", but these are still ugly 60's relics denoting the transitional period when "vintage" becomes "junk".  The number of stateside makers dwindled precipitously during the 1950's, leaving only a few giants in their wake.

What happened to this time of fecund production?  Surely this ramped-up manufacturing was a war dividend, but did we fail to continue to support them?  Perhaps they were victims of their own excellent product, but one would think Mr. Veblen's theory of conspicuous consumption would mandate new purchases for newness sake alone.

Where is today's war dividend?  If it exists, it will not be enjoyed by our flagging middle class.

We sentimentally render a salute to a bygone, not-so-distant time.


Labels: day that will live in infamy, hot stuff, toasters

Ironically, the U.S. military played a role in this process. In the Forties and Fifties pretty much every service pioneered the "don't repair, replace" method of dealing with small objects and assemblies.

This got passed on first to agencies like NASA and from there to the civilian manufacturers. It had double values; it made the objects cheaper and insured a steady stream of sales replacing the cheap crap that broke down...

I'm not sure if the process is reversible.

Another thing that this implied was the loss of thousands (?) of jobs repairing these appliances. My father remembers that this applied to damn near everything; you had a cobbler that resoled your shoes, a local mister fix-it that repaired your radio and toaster and range, the knife-sharpener guy who sharpened your reel mower blades...

We've lost an entire economy that revolved around these sturdy domestic manufactures, and I can't see how it will ever return; too many economic powers depend on it not returning...

The thought about the loss of that secondary economy is what spurred my thinking.

The WSJ says there are ~7,000 cobbler shops today vs. 120,000 during the Depression era. So many jobs have become superannuated due to our throwaway society or automation. You can't re-sole cheap rubber soles.

Small appliance repair shops fixed things; now those items get hauled to the curb for takeaway. It is a whole way of life and interaction which has fallen away. Replacing the soda fountain (somewhat) is the barista at Starbucks; women who made coffee didn't used to be called baristas. Today I saw a line extending into the roadway for Starbucks drive-through -- it may as well be McDonalds for all that's worth.

Lisa,
I share your affection for things were made before, say, 1960 – tools, cameras, lamps, the ordinary accruements life that were built for a generation of more of service. As Ricardo Petrella (quoted by Zygmunt Bauman “Does Ethics Have a Chance in a World of Consumers?”) put it, the global trends direct “economies toward the production of the ephemeral and volatile – through the massive reduction of the life-span of products and services – and of… temporary, flexible and part-time jobs.”

Chief,
This essay can lead to a discussion of the old COSCOM which had tailors,shoe repair, mess kit repair etc.. to include water, shower point bakery for bread,laundry etc...
All of this is OBE in the PWOT.
I wonder what we would do in a real theater army war with real corps support needed.
jim

Chief,
This essay can lead to a discussion of the old COSCOM which had tailors,shoe repair, mess kit repair etc.. to include water, shower point bakery for bread,laundry etc...
All of this is OBE in the PWOT.
I wonder what we would do in a real theater army war with real corps support needed.
jim